John Kelly wants mass deportation — and given his record, that's no surprise 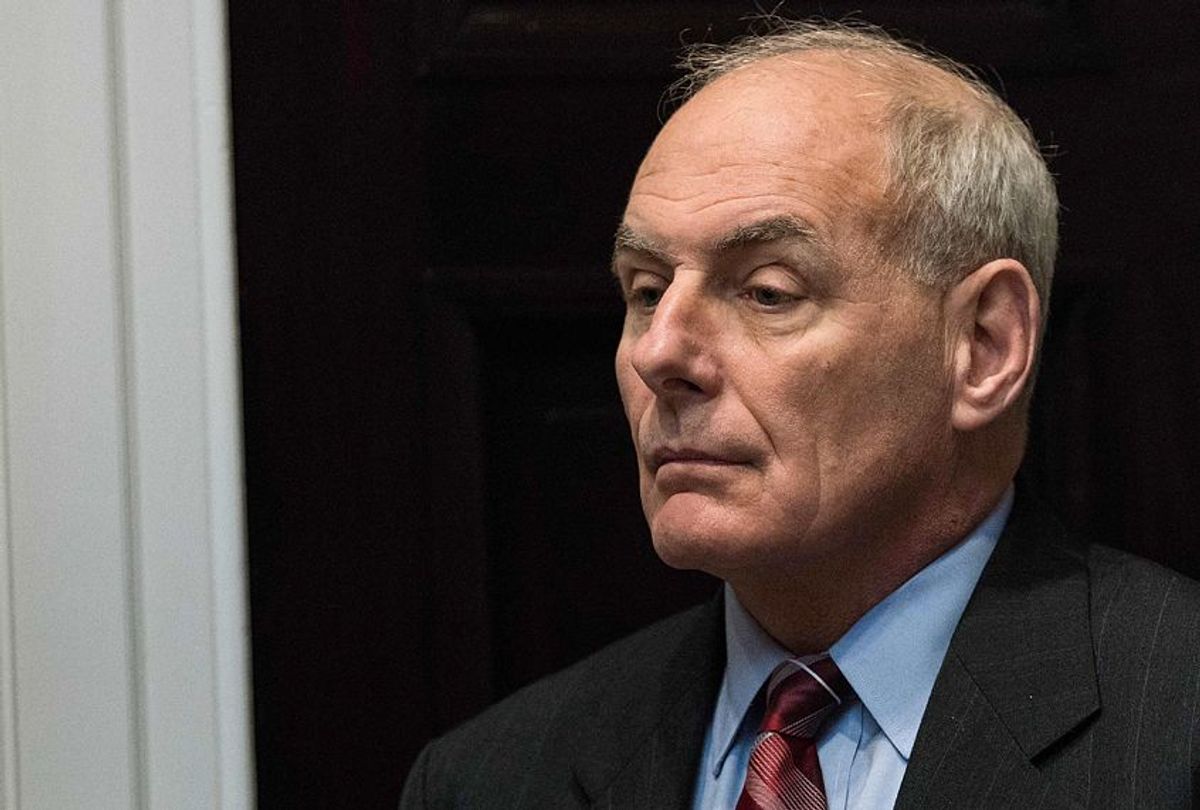 Donald Trump is finally going to meet Philippine President Rodrigo Duterte, the murderous despot with whom he has, according to the White House, a "warm rapport." It should be a true meeting of the minds (and also another chance to promote Trump Tower Manila). Trump is just coming off his glorious triumph in China which resulted in nothing of substance but succeeded in showing the world that all you have to do to make him gush like a schoolboy and give away the store is shower him in pomp and flattery. You can be sure that his staff will have this article by "the failing New York Times" framed for him upon his return:

They refer to him as “Uncle Trump,” “Grand Commander” and “Donald the Strong.” After Mr. Trump’s visit to the Forbidden City on Wednesday with President Xi Jinping, one fan wrote on social media, “Long live Emperor Trump!”

The fact that the Chinese media is tightly controlled and encourages such fawning praise will undoubtedly be cut from the clipping, although if Trump knew about it he would surely wish he could command the American media to do the same.

Trump will be meeting with his role model, Russian President Vladimir Putin, in Vietnam for some "informal" boys talk but will not connect with the admitted murderer Duterte until he goes to Manila for the last leg of the trip. Recall that Trump was very impressed with Duterte's extrajudicial approach to dealing with drug use which has resulted in thousands of people being gunned down in the streets by vigilantes or held in grotesquely inhumane conditions. After all, Trump told Duterte so in a phone call:

I just wanted to congratulate you because I am hearing of the unbelievable job on the drug problem. Many countries have the problem, we have a problem, but what a great job you are doing and I just wanted to call and tell you that.

Trump is accompanied on this trip by White House chief of staff John Kelly who is a hardcore drug warrior himself, going back before his time at the Department of Homeland Security to his Marine Corps days as the head of the Southern Command, which oversees U.S. forces in Central and South America. He's probably as impressed with Duterte's efficiency in dealing with the problem as Trump is. He's certainly not one to be overcome with sympathy or compassion for his fellow man.

The Washington Post reported on Thursday that Kelly took time out of his busy schedule in Japan to pressure Elaine Duke, the acting director of Homeland Security, to expel tens of thousands of Hondurans living in the United States. She had decided to extend the residency permits for these people for six months; many of them have been in the country for decades under the temporary protected status program (TPS). The Post article reports that Duke refused and told Kelly she is resigning, although she was only confirmed last April.

There are 50,000 Haitians and 200,000 Salvadorans still awaiting decisions on their TPS status as well. The Trump administration wants these people out, on the premise that no "temporary" program should be permanent and they should all go back to their countries of origin no matter how long they've been here. To be clear, these are not "illegal immigrants." These people have lived here legally, working and contributing to the nation for years. Anti-immigration zealots want to force them to upend their lives all over again simply so to make a political point.

Kelly has been particularly hard on refugees from Central America. Like Trump, he apparently believes they are a bad element bringing in crime, drugs and even terrorism. He has often spoken about the region's broken societies but seems entirely unsympathetic to people who try to leave in order to make better lives for their families.

Kelly has been adamantly opposed to allowing refugee status for any Central American migrants, even forcing women with children, with no criminal records, to return to their home countries to face persecution and violence. He has said that such immigrants "parrot well-worn phrases to get a shot at staying in the United States."

So it is anything but surprising that Kelly wants to see tens of thousands of legal Central Americans rounded up and deported. He believes they do not belong in the United States at all, even though they are fleeing countries that have been radically destabilized and turned violent by the deportation of criminals who were hardened in American prisons.

Of course, when it comes to prisons Kelly knows his stuff. He's also a former commandant of the Guantánamo Bay detention facility. When he was nominated to head the Department of Homeland Security, the Center for Constitutional Rights stated, “General Kelly’s aggressive oversight of the illegal military prison at Guantánamo Bay disqualifies him to head the Department of Homeland Security. Presiding over a population of detainees not charged or convicted of crimes, over whom he had maximum custodial control, Kelly treated them with brutality.”

In 2013, Kelly dealt with a hunger strike at Gitmo by ordering his troops to fire rubber bullets at protesting prisoners, and then to leave them face down, soaked in pepper spray, with their hands tied behind their backs for six hours. No wonder Trump loves the guy so much.

When he was nominated for the DHS position, Kelly said, "the American people voted in this election to stop terrorism, take back sovereignty at our borders, and put a stop to political correctness that for too long has dictated our approach to national security." He is living up to that promise.

As DHS director Kelly told his agencies to take the gloves off and they began deporting any and all undocumented immigrants they could get their hands on, regardless of whether they had committed any crimes. He backed Trump's original Muslim ban warning that "terrorist foot soldiers" were pouring into the country. He has consistently said that the drug problem must be dealt with inside the United States by clamping down on demand. Duterte certainly agrees, with him and has developed an impressive program to do just that. (Let's hope Trump sticks with Nancy Reagan's "Just say no" instead.)

Considering all that, it's no surprise that Kelly would seek to interfere with what is supposed to be an independent DHS decision on temporary protection status for tens of thousands of people. Treating vulnerable populations with unnecessary cruelty is right in John Kelly's wheelhouse. Unfortunately, that's exactly what President Trump likes about him.