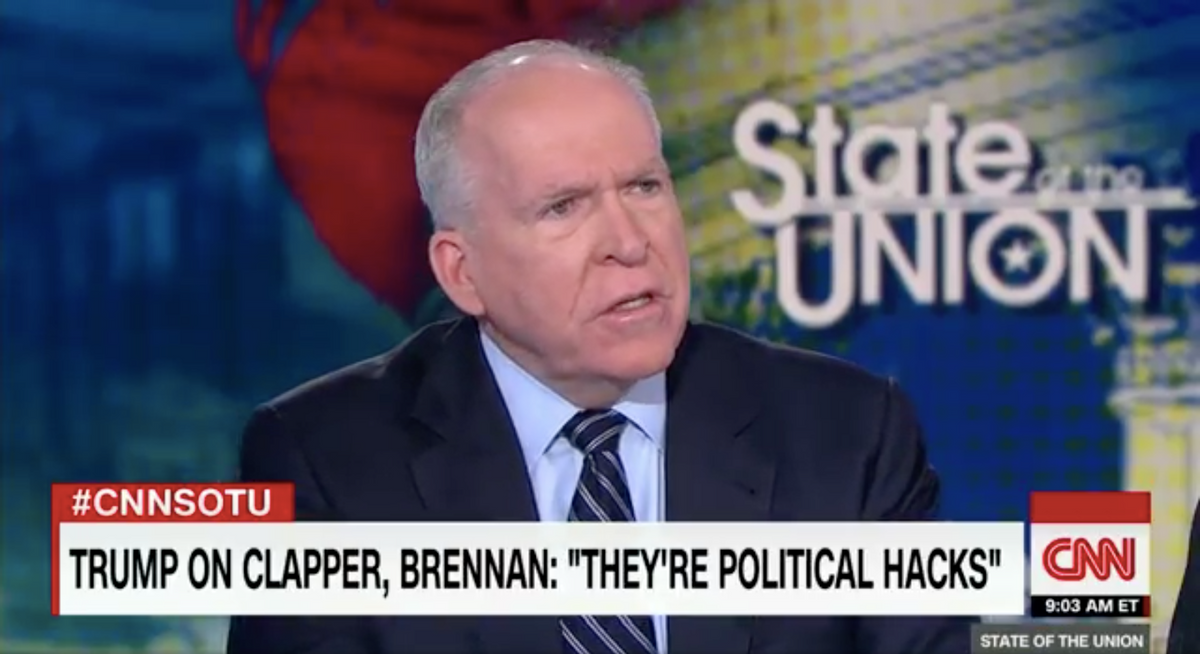 President Donald Trump tried to undermine the investigations into Russia's election interference last week by taking pot shots at former officials in the U.S. intelligence community. He called James Clapper and John Brennan "political hacks," implying that they were biased in their assessment of Russia's involvement.

Clapper and Brennan responded to the attack on CNN's "State of the Union" Sunday, suggesting that the criticism was a point of pride for the two of them.

"He was referring to us as political hacks because he was trying to delegitimize the intelligence community assessment," Brennan said. "Considering the source of the criticism, I consider that criticism a badge of honor."

Brennan, the former head of the CIA, said it was obvious that Trump wanted to undercut the investigations into his campaign, but he could not exactly explain the motive behind Trump's subversion.

"It's either naiveté, ignorance or fear in terms of what Mr. Trump is doing vis-a-vis the Russians," Brennan said.

Speaking to a pool of reporters aboard Air Force One on Saturday, Trump addressed the U.S. intelligence community's assessment that Russia sought to influence the 2016 election in his favor.

Trump told the reporters that he spoke with Russian President Vladimir Putin about the election, and that the former KGB agent denied any involvement.

On "State of the Union" Sunday, Clapper, the former Director of National Intelligence, said that Russia should not be trusted.

“The Russians do not harbor good intentions toward the United States, and there should’t be any illusions or any ambiguity about that. And our President fosters that ambiguity,” Clapper said. "The threat posed by Russia, as John just said, is manifest and obvious. To try to paint it in any other way is, I think, astounding, and in fact, poses a peril to this country."

Former Director of National Intelligence James Clapper: “The Russians do not harbor good intentions toward the United States, and there should’t be any illusions or any ambiguity about that. And our President fosters that ambiguity” #CNNSOTU https://t.co/blrDOOHioO