The Democrats are perfectly positioned to be the party of peace, but they've chosen war

When will the current party of opposition stand up for peace, and embrace an anti-war movement? 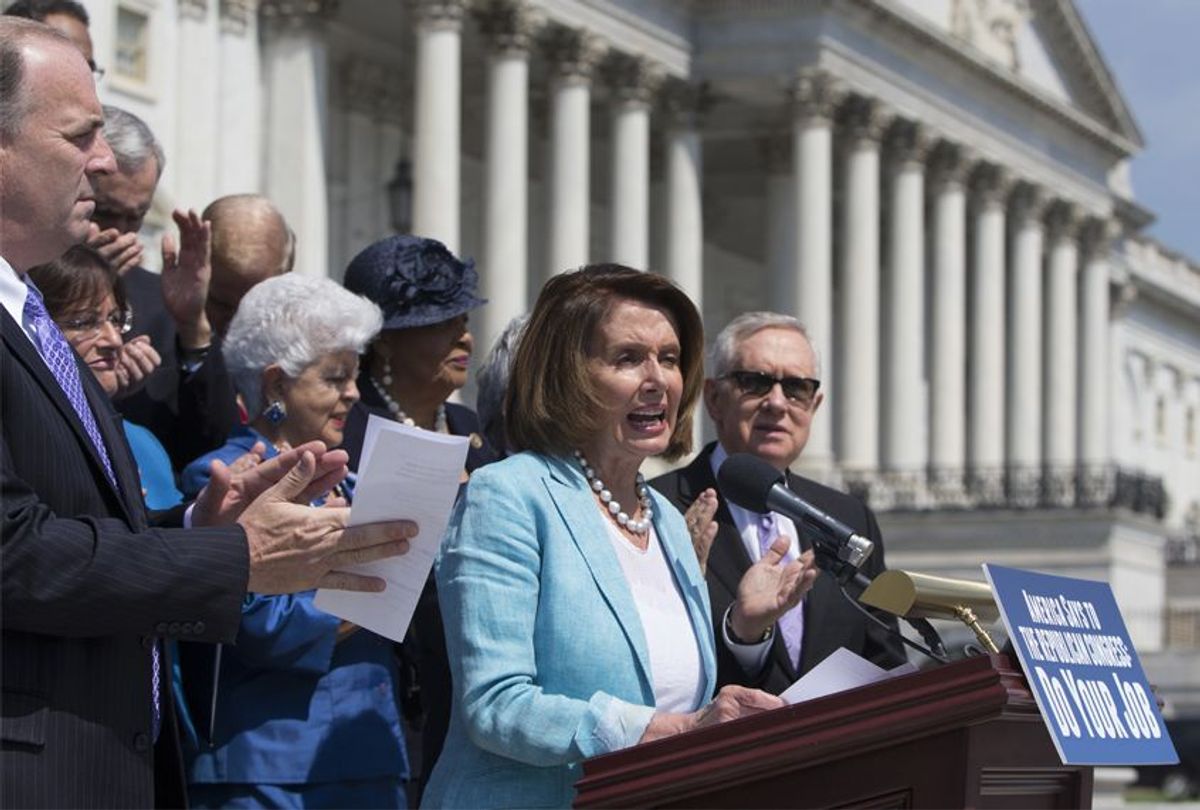 A generation has come of age that cannot remember a time when America wasn't at war. In September, the United States entered the 17th year in its global war on terror. The bodies, the bullets, the bombs and the blood have seeped over into a third administration, perhaps the most menacing and unpredictable one yet.

As the public has grown weary of war, the enemy — not a singular unified force but rather an adaptive and evolving ideology — has sprawled the globe. At the same time, the footprint of the U.S. military has grown exponentially — two reactionary actors that have emboldened one another.

And, yet, follow C-SPAN or read the Congressional Record. There's no major, considerable or sustained anti-war movement supported by our politicians — at least none with any measurable effect.

Indeed, since the launch of our war on terror, both Republicans and Democrats in Congress have done little to discuss it, scrutinize it or do anything besides enable the executive branch's increase of our military presence in the Middle East and Africa.

This state of affairs began in earnest just three days after Sept. 11, when both chambers of Congress passed the Authorization for Use of Military Force (AUMF) by a near unanimous vote.

The AUMF establishes that "the President is authorized to use all necessary and appropriate force against those nations, organizations, or persons he determines planned, authorized, committed, or aided the terrorist attacks that occurred on September 11, 2001, or harbored such organizations or persons."

On Capitol Hill, Sept. 14, 2001, Rep. Barbara Lee, D-Calif., was the lone opposition vote to the bill that would define and fuel America's longest war.

Back then, Lee wrote that that AUMF "was a blank check to the president to attack anyone involved in the Sept. 11 events — anywhere, in any country, without regard to our nation’s long-term foreign policy, economic and national security interests, and without time limit." Time has proved her right.

While she has repeatedly called for the AUMF to be repealed and the ambiguous language used in it to be re-evaluated and debated, neither party in Congress has embraced her efforts and few in the public know of them.

In fact, most Americans have become profoundly removed from our wars, so much so that the nuances of the conflicts we're involved in, and the ramifications of them, are near unknown on a broad scale.

Many in the U.S. weren't even aware their nation had invested service members and materiel into Niger before hearing news of an ambush that cost four American lives in early October. And, yet, it is such operations in Africa that are now serving as a "recruiting tool" for terrorists, writes journalist Nick Turse, who has long documented U.S. military operations in Africa.

"While the roots of terrorism are complex it is fair to say that the larger U.S. military presence has, at a minimum, served as a recruiting tool for the growing number of terrorist groups operating in West Africa," William Hartung, director of the Arms and Security Project at the Center for International Policy, told Turse.

The same goes for a much longer dedication to operations in the Middle East. The use of drones has been condemned from various sources for creating more terrorists than it kills. And, yet, Trump has already rolled back safeguard restrictions and lowered the threshold for who is targeted in kill missions in the use of this flawed technology.

But this is not, as mentioned above, a partisan issue. While many aspects of our forward national security apparatus such as mass surveillance, covert military raids and indiscriminate drone strikes were formed during the administration of President George W. Bush, they also blossomed during the term of President Barack Obama.

Obama was frequently misrepresented by the right as someone who was soft on terrorism, or otherwise didn't do enough to combat the Islamic State, which rose to prominence under his presidency as a result of the power vacuum caused by the U.S.'s invasion and occupation of Iraq.

But under Obama, a Nobel Peace Prize laureate, the U.S. dropped more than 26,000 bombs across seven Muslim-majority nations in his last year of office alone.

In truth, Democrats, for the most part, remained silent and conveniently aloof from the more troubling aspects of Obama's presidency — and at a serious cost. They remain so now, even as the tools of destruction have been passed to Trump, someone who has already demonstrated a nonchalant disregard for their considerable power.

Many Democrats bristle at the instability Trump represents. Yet, they rarely object to the shades of absolute power consolidated within his office and the intelligence community's association with it. That, for the most part, has already been normalized.

The Democrats have had ample opportunity to address these concerns but have chosen to mostly pave them over since Trump took office. The party overwhelmingly helped pass a bill in the Senate that increased the Pentagon's annual budget by roughly $80 billion, more than Trump originally asked, and brought the total annual budget to a breathtaking $700 billion.

The Democrats also have virtually no room to oppose the Trump administration's incendiary rhetoric and potential use of military aggression towards countries such as North Korea and Iran, after having ushered through a package that slapped sanctions on the two nations, as well as Russia. Sure, they can offer lip service against the president's saber rattling. But on a policy basis, they're right there with him.

Democratic leadership in the House has also resisted bipartisan attempts to force a vote on the role the U.S. has played in Yemen. The bill would revoke U.S. support for the Saudi Arabian-led coalition. The U.S. has already offered the coalition substantial support, which has come under fire for its indiscriminate bombings and targeting of hospitals, factories and schools.

The conflict is perhaps one of the easiest to oppose. It has rapidly become one of the worst humanitarian crises of the 21st century. Morally, ethically, the plan for any party should be quite clear: pour efforts into demanding a political solution and safe passage for human rights organizations to deliver aid to the millions suffering. The Democrats have not forwarded that line of action.

Yes, if the party did reverse course and choose to move forward with an anti-war agenda, it would face waves of criticism for its sudden opposition after eight years of support. Just look at how the NFL has been brought near to its knees for allowing its players to "disrespect the troops." Of course, such public-image concerns shouldn't stop any party or any individual from questioning our military industrial complex.

When Daniel Ellsberg leaked the Pentagon Papers in the early '70s, he exposed how both Congress and the American public had been lied to for years in order to protect U.S. global hegemony. It was a crest in a growing wave of concern about the unchecked strength of the executive branch and about its relationship with the intelligence community.

Eventually, those leaks and those concerns would lead the public to understand the grim realities of the Vietnam War. The discoveries only further fueled the mass opposition efforts by the public.

In the last eight years, we've had the same kind of leaks, whether it's Chelsea Manning's Iraq War logs or the Edward Snowden documents that revealed the intrusive mass surveillance of this country, as well as the world, by the National Security Agency.

Snowden and Manning are essentially viewed within Washington as "untouchables," vilified as traitors by both parties, rather than praised for revealing some of the darkest secrets of our nation's behavior.

And still, opposition in Congress and out in the streets has never truly coalesced into a mass, consequential movement. Again, our current state of affairs seems to have been normalized.

And yet, a movement for peace — or at least for a comprehensive plan to end or redirect U.S. shadow wars — is needed now more than ever. More than that, the fact that the Trump administration is immensely unpopular may provide the perfect space for such a movement tied to the current party of opposition to prosper.

While the Democrats seem interested in resisting Trump, they've expressed no interest in resisting his office and the martialism it represents. They're just waiting for one of their picks to reside in the White House and take the reigns of that same "imperial presidency."

Though many may see this as a harsh indictment of the Democrats, it's essential to correcting our course. It's quite obvious the Republicans, by and large, hardly care to even pretend to be concerned with the timeless wars abroad the U.S. has entrenched itself in. The Democrats, for their part, seem to have only aimed to offer the image of a slightly better alternative. In reality, they're not much different from the opponents across the aisle. It's a cheat, one they should be called out on.

Mobilization is needed, and so is the support for progressive candidates willing to end perpetual warfare and rethink U.S. strategy by coming to terms with the sources of terror. The country needs a party willing to stand up to those in Washington — who for so long have blocked such efforts — without fearing repercussions.

To begin that process, it's up to the public to forward difficult conversations and criticisms of unchecked U.S. foreign aggression. It is up to us to make the Democrats uncomfortable about it. Certainly they seem utterly comfortable with war at the moment.