Mike Pence gets tangled in another lie: This time it's Don Jr. and WikiLeaks 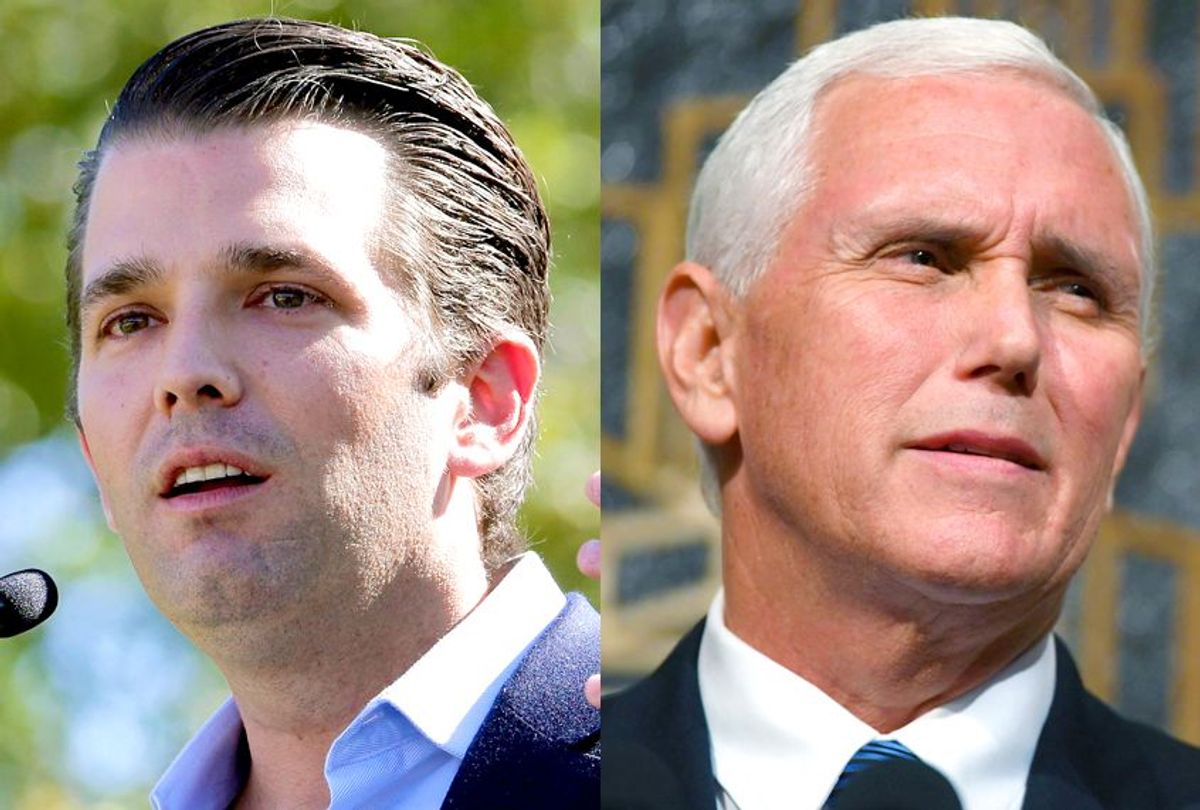 It's time for another round of "Is Mike Pence actually as incompetent as he looks, or is he just a liar?"

The messages are mostly from WikiLeaks, which CIA Director Mike Pompeo, a Trump appointee, has described as a “non-state hostile intelligence service.” But Trump Jr. responded personally on several occasions.

On the same morning Pence claimed on Fox News that the Trump campaign wasn't "in cahoots" with WikiLeaks -- which was then orchestrating the release of Hillary Clinton’s hacked emails -- Trump Jr. tweeted out a link reportedly provided to him by WikiLeaks.

“Nothing could be further from the truth,” Pence told “Fox & Friends” co-host Steve Doocy when asked on Oct. 14, 2016, about reports of coordination between the Trump campaign and WikiLeaks. “I think all of us have had concerns about WikiLeaks over the years and it’s just a reality of life today.”

Hours later, Trump Jr. encouraged his millions of Twitter followers to conduct a WikiLeaks search to discover “all the corruption and hypocrisy” purportedly revealed in the hacked emails of Clinton’s campaign chairman, John Podesta.

According to the messages obtained by the Atlantic, WikiLeaks sent a direct message to Trump Jr. two days earlier, on Oct. 12, which read in part, “strongly suggest your dad tweets this link if he mentions us … Btw we just released Podesta Emails Part 4.”

Ioffe’s report notes that the exchanges were provided to Congress in its investigations into Russia’s interference in the 2016 presidential election.

On Sept. 20, 2016, Trump Jr. responded to a warning from WikiLeaks about the launch of “A PAC run anti-Trump site,” by writing: “Off the record I don’t know who that is but I’ll ask around. Thanks.”

At one point during the 10-month period of communication between Trump Jr. and WikiLeaks, the president’s son accepted a password to one of the WikiLeaks websites, a potential violation of the Computer Fraud and Abuse Act if used for access. On Election Day, hours before Trump became the clear winner, WikiLeaks sent a message to Trump Jr. suggesting that his father refuse to concede the election and instead challenge the media and "other types of rigging that occurred." As recently as July of this year, WikiLeaks claimed it reached out to Trump Jr., offering to publish his email exchange with Rob Goldstone, the publicist who set up the now-infamous Trump Tower meeting with Russian lawyer Natalia Veselnitskaya in June 2016.

Recall that on March 9, Pence claimed on Fox News that he had only just heard about Michael Flynn’s lobbying on behalf of the Turkish government. A May report indicated, however, that during the presidential transition, Flynn had informed Pence's team that he was under federal investigation for not properly disclosing the paid work back in January. Pence also said during the transition that Flynn had not discussed sanctions with the Russian ambassador, which also turned out to be untrue.

On a different occasion, Pence said the transition was not seeking a security clearance for Flynn's son, Michael Flynn Jr., which was also false.

Pence’s story this time around is apparently that he was somehow the odd man out -- yet again.

“The Vice President was never aware of anyone associated with the campaign being in contact with Wikileaks,” Pence’s press secretary, Alyssa Farah, said in a statement. “He first learned of this news from a published report earlier tonight.”

The fact that so many on the campaign, including Donald Trump Jr., reportedly knew about the WikiLeaks communications makes it challenging, at minimum, to believe Pence had no idea. Whether the vice president has any knowledge of or involvement in collusion between the Trump campaign and Russian agents remains unknown, but he is certainly up to his eyeballs in falsehoods and deceptions on the matter. Unfortunately for Pence, appearing to be clueless and incompetent is not a defense that will protect him from Robert Mueller or other investigators.