Jeff Sessions vs Republicans: What we learned from a congressional trainwreck 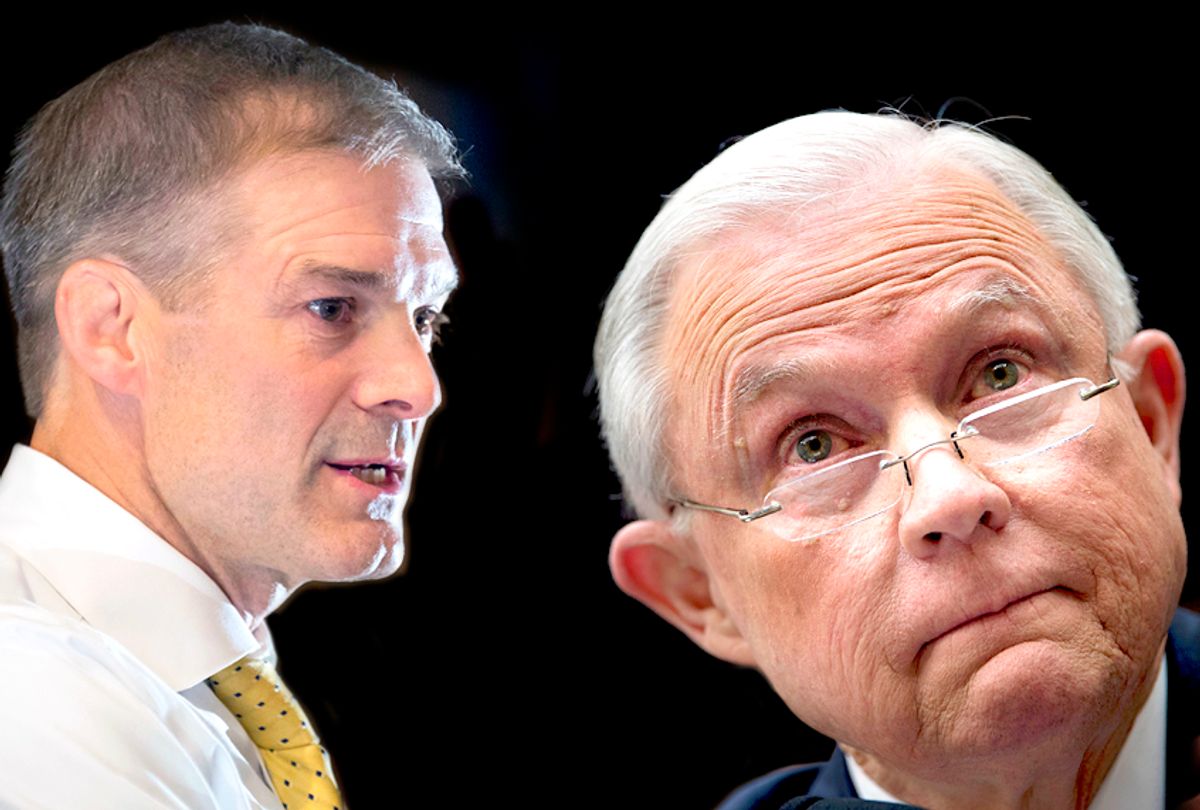 Jeff Sessions’ first appearance before the House panel with oversight on the Department of Justice more than nine months into his term as attorney general was certainly a mixed performance — full of implausible denials, but at times, exhibiting bits of remarkable boldness.

Faced with mounting Democratic accusations that he lied under oath during multiple Senate hearings, President Donald Trump’s attorney general testified for about five-and-a-half hours Tuesday before the House Judiciary Committee and managed to leave nearly every member more perturbed.

"I will not accept — and reject — accusations that I have ever lied. That is a lie," Sessions angrily insisted.

Such defiance in the face of his growing Russia contradictions only served to stir up complaints from Democratic lawmakers. Sessions’ answer on another aspect of the congressional investigation into last year’s election, however, served as a smackdown of Republicans’ fevered dream for a federal investigation into Hillary Clinton.

Rooted in decades of right-wing demonization, led by Donald Trump’s bloodthirst and fueled by conservative media outlets eager to distract from an ever-expanding Russia probe, Republican calls for Sessions to appoint a second special counsel to investigate Clinton have recently grown louder. In a letter this week, Sessions appeared to give in when his Department of Justice directed unnamed senior federal prosecutors to "evaluate certain issues" raised by Republican lawmakers.

“[T]here are significant concerns that the partisanship of the FBI and the department has weakened the ability of each to act objectively,” retiring Judiciary Chairman Bob Goodlatte, R-Va., complained in his opening statement.

Sessions simply dashed the hopes of Rep. Jim Jordan, R-Oh., when he told the conservative lawmaker that there is an insufficient basis to launch a special investigation into the failed Democratic presidential candidate.

“It would take a factual basis that meets the standards of the appointment of a special counsel,” Sessions flatly replied.

He continued to explain to the bewildered Republican: “That’s the only thing I can tell you, Mr. Jordan. You can have your idea, but sometimes we have to study what the facts are and to evaluate whether it meets the standard that requires a special counsel.”

Sessions has come under intense pressure from Trump himself to take action against Clinton, and his unwillingness to take the bait on Tuesday is remarkable.

It still remains to be seen if Sessions will ultimately succumb to the Republican pressure. As he testified Tuesday, attorney general is his dream job and his performance before the committee was in many ways a signal of support for Trump, but he’s also demonstrated a willingness to at least retain the appearance of independence.

How the Justice Department handles the evaluation of Republicans’ requests will be the true test. Despite being debunked numerous times, Republicans included requests to investigate allegations that the Clinton Foundation benefited from an Obama-era uranium transaction involving a Russian state company, a deal Trump himself has continually urged the Justice Department to investigate. If by "senior prosecutor," Sessions means a Trump-appointee, then his testimony on Tuesday will prove to be as full of falsehood as his previous appearances on Capitol Hill.

Sessions told lawmakers he has "no clear recollection" of the March 2016 meeting at which a meeting between Donald Trump and Russian President Vladimir Putin was proposed by the now infamous campaign aide George Papadopoulos, yet Session somehow remained certain that “at the meeting, I pushed back."

The attorney general had previously testified before the Senate Judiciary Committee that he had no knowledge of any contacts between Trump campaign advisers and Russians with ties to the Kremlin. On Tuesday, he testified before the House panel that he recalled the Trump Tower meeting with Papadopoulos, who has pled guilty to lying to the FBI, after seeing recent news reports about the event.