I've seen the future of tech, and she's female

A tech conference with no men in sight? Heaven for those of us who have seen the opposite too many times 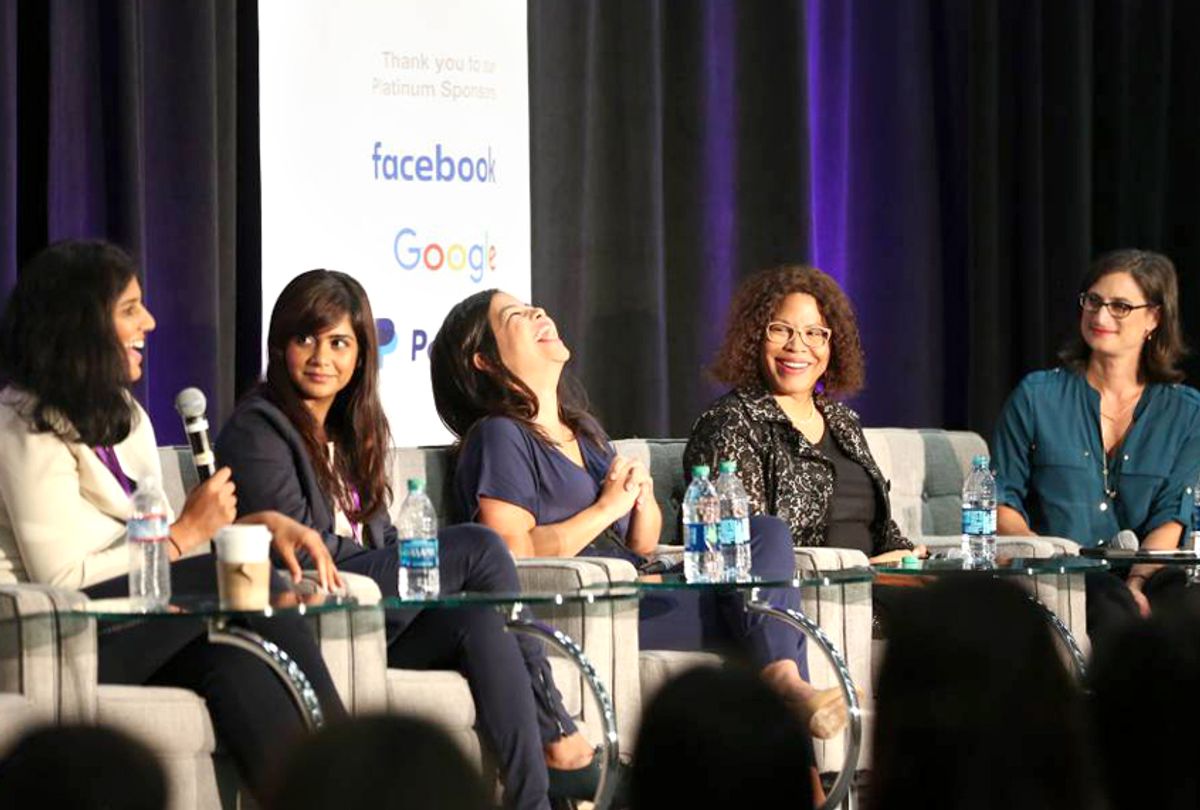 Founders Panel at the Women in Product Conference, Sept 17, 2017 (Ab@alishabrook.com)
--

This fall, I was invited to moderate a panel for a conference put on by Women In Product, a non-profit formed to create a strong community of women builders and leaders in the tech industry.

When I walked into the main area of the San Jose Convention Center, the room had an energy you could practically taste.

Also, it was lunchtime.

It was surreal. A tech conference . . . with not a man in sight. The typical scenario, as you may have experienced yourself, is a large hall, with mostly white guys everywhere, giving you, the female attendee, the once-over — whether it’s "will she buy my product?" or "will she have a drink with me?" None of that here.

And, unlike most other conferences I’ve been to, in addition to an impressive lineup of speakers and panelists, there was also a makeup booth, a photographer offering headshots, and a lounge area with puffy white couches where women watched an entrepreneur demonstrating the power of a new product she had invented: a briefcase meets purse meets backpack. So, yeah, some girly stuff.

But there is something about bringing together a whole lot of powerful, ambitious women in one place where they can feel free from interruptions, mansplaining and awkward gender-based power dynamics.

And on the panel that I led, the speakers did not hold back. We talked about what surprised them about starting a company, the pros and cons of running a company while female, from leadership style to sexual harassment and gender bias — and ultimately as business-people what it takes to scale.

This panel took place on September 19th, 2017 and we had a full house. You can listen to our conversation here:

Women In Product was founded by a group of senior women product leaders working at a variety of Silicon Valley tech companies including Facebook, Google, Intuit, Jet.com and Trulia.

Heather Fernandez is the founder of Solv, a marketplace for same day doctors’ appointments. Before founding Solv, she was head of business services at Trulia.

Aarthi Ramamurthy launched her company Lumoid in 2014. It’s a try-before-you-buy service for consumer electronics. Before starting her own company she was a product manager at Netflix and Microsoft -- she also built an app while on her honeymoon, called Bubblegum, just saying.

Selina Tobaccowala was President and CTO at SurveyMonkey, and she co-founded Evite in 1997 and was Senior Vice President of Product & Technology at Ticketmaster. Her new company Gixo, is a workout app that offers online fitness classes.

For more stories of how women rise up, subscribe to the Inflection Point podcast.