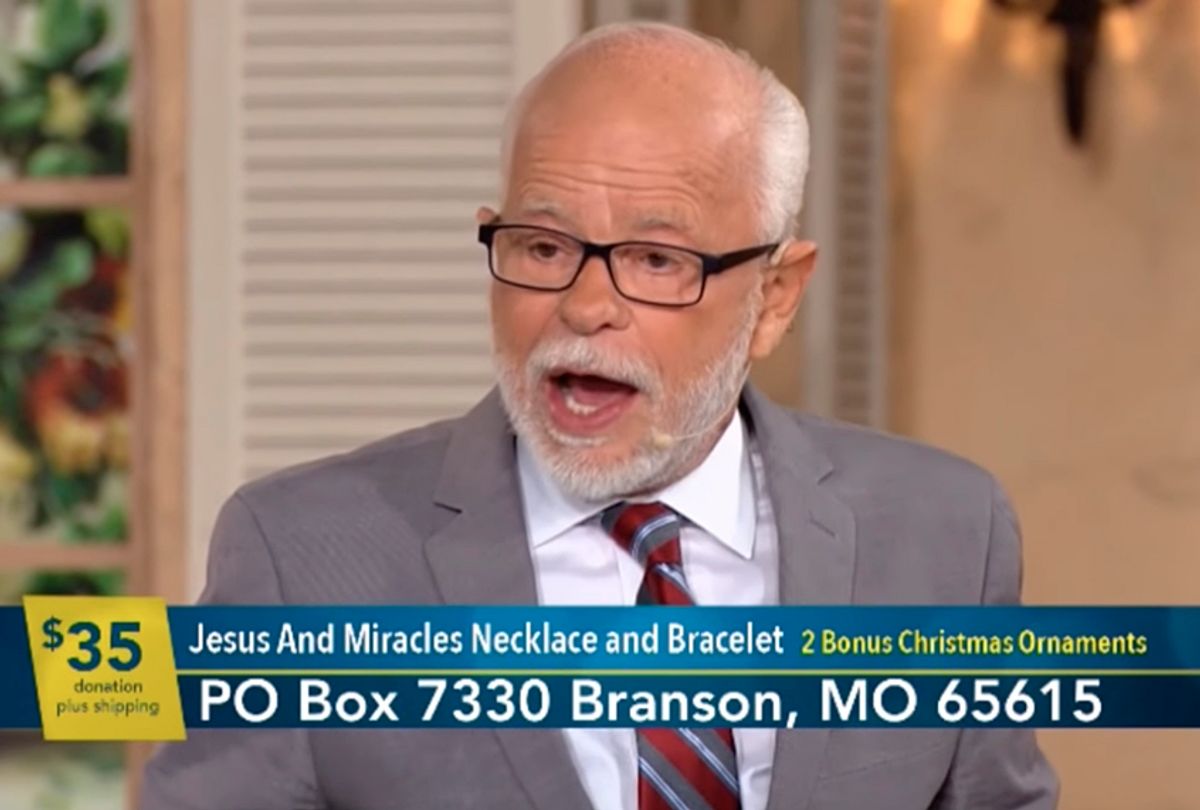 With Bill O'Reilly wandering the cold wilderness with only a candle and ratty blanket for protection, it's up to a new batch of brave souls to take up his spear and do battle against the unwashed Volvo-driving hordes putting on the Yuletide jeer in the annual "War on Christmas."

This week, Jim Bakker — disgraced televangelist, doomsday prepper foodstuffs salesman and owner of a solid beard — stepped to the fore.

On a recent episode of "The Jim Bakker Show," the host took O'Reilly's contention that the phrase "Merry Christmas" had become a target of the left one step further by claiming that it had been "outlawed" altogether.

Bakker started off his comments on the perceived increasingly secular nature of the holiday season by saying, "I'm not anti-Santa Claus, I just don't want him in my face every minute because [Christmas] is the birthday of Jesus Christ."

After that bummer, he claimed, “They outlawed ‘Merry Christmas’ a few years ago and you know it." He was not specific about who that "they" was or if uttering the phrase was a misdemeanor or a felony.

Bakker then explained how he became aware that somehow, someway the powers that be in this country had conspired to make saying the festive creating a crime.

"You couldn’t even say 'Merry Christmas' at Walmart," he said, "and the Walmart greeters told me they weren’t allowed to say it." Airtight!

Fortunately, Bakker claims he has already remedied this injustice through a campaign of protest and civil disobedience that would make Martin Luther King Jr. proud.

"But we all started writing and what did we do?," he asked. "We changed it. We changed it. We all worked together. You don’t have to lay down for it.” The audience applauded this hard-won turning of the tide. O'Reilly, your work lives on.

Indeed, you never did have to lay down for it as the phrase has never been illegalized anywhere in the U.S.'s 50 states or outlying territories. As HuffPost noted, there is a but a slight ring of truth to Bakker's statements, very slight. "Walmart made headlines in 2005, when greeters were told to say 'happy holidays,'" it wrote, "a policy the company reversed the following year."

With this battle fought and won before it even existed, we may all rest easy and Bakker may go back to claiming that the Bible predicted the existence of Apache helicopters.