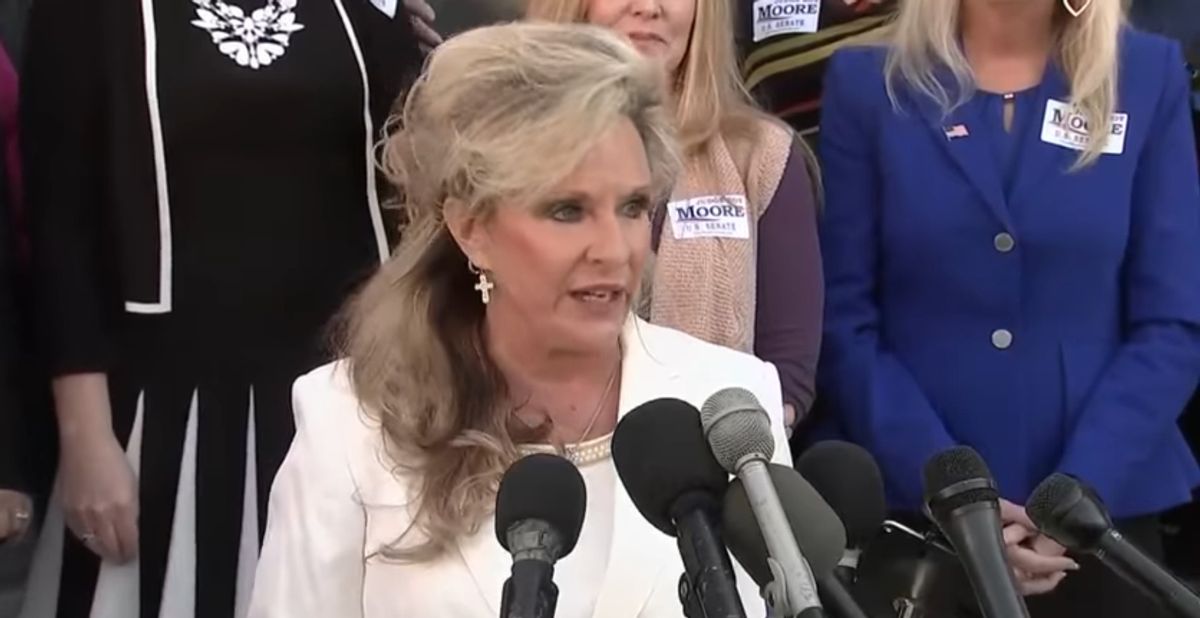 As several polls have shown that allegations of sexual misconduct against teen girls is harming Roy Moore’s Alabama Senate campaign, his wife Kayla came fiercely to his defense in a Friday news conference in which she vowed that he would not quit.

In a brief, written speech surrounded by other women, Kayla Moore urged Republicans to stick together, framing the charges against her husband as a smear campaign conducted by people who are trying to harm President Donald Trump, even though several of Moore’s accusers are self-identified Republicans and Trump supporters.

“All of the very same people who were attacking President Trump are also attacking us,” she said, claiming that the Washington Post’s initial report of allegations that Moore had molested a 14-year-old girl and sought relationships with other teens during the 1980s, was motivated by partisan considerations.

Kayla Moore also invoked the name of the Human Rights Campaign, a left-leaning group that works for LGBT rights, but offered no evidence that it was connected to claims of improper behavior by her husband. She further implied that the Democratic National Committee and an unspecified “Washington establishment” were somehow responsible for the allegations.

“Even after all the attacks,” Kayla Moore said, “He will not step down.” The crowd applauded vigorously.

She continued: "He will not stop fighting for the people of Alabama. In his words, and I quote, ‘I will not stop until they lay me in that box in the ground.’”

A number of high-level Washington Republicans have urged Moore to end his campaign even as no Alabama GOP officials have made such calls.

Trump has thus far tried to toe a middle line, studiously avoiding discussing the scandal himself, even though the White House press office said that Moore should resign if the charges against him are true. Several reports out of the White House have suggested that the president is wary of offending far-right Republicans after Alabama GOP voters ignored his advice during two separate primary votes to vote for another candidate.

In her news conference, Moore’s wife indirectly invited the president to come out in defense of the Christian supremacist former state judge.

“I personally think he owes us a thank you … Have you noticed you’re not hearing too much about Russia?” she said in reference to the ongoing controversy surrounding former Trump campaign officials’ activities with Russian government proxies. The scandal has been a particularly sore spot for Trump.

Kayla Moore repeatedly blasted the news media in her remarks.

“They print whatever anyone says without checking to see if it is correct,” she claimed.

It was a ludicrous criticism coming from Kayla Moore considering that she has repeated a number of baseless defenses of the GOP candidate that have been concocted by random social media users. She herself got into the fake news business when she claimed that more than 50 Alabama pastors were continuing to support her husband. Her only evidence was a letter written earlier this year long before the allegations of sexual misconduct emerged which she had altered.

“They will call you names, they will say all manner of evil against you, and I would say, consider the source,” Kayla Moore said in reference to journalists.

On Thursday, both Roy and Kayla Moore spoke at a news conference organized by fellow Christian supremacists which featured extended-length rants against a "lynch mob" led by journalists as well as "gay terrorists."

Moore has become widely admired in the extreme Religious Right for his many decades of support for criminalizing homosexuality and seeking to grant Christians more rights than other Americans. More business-oriented Republicans have long disliked him but until the recent scandal, they have taken almost no actions to oppose his radical viewpoints.