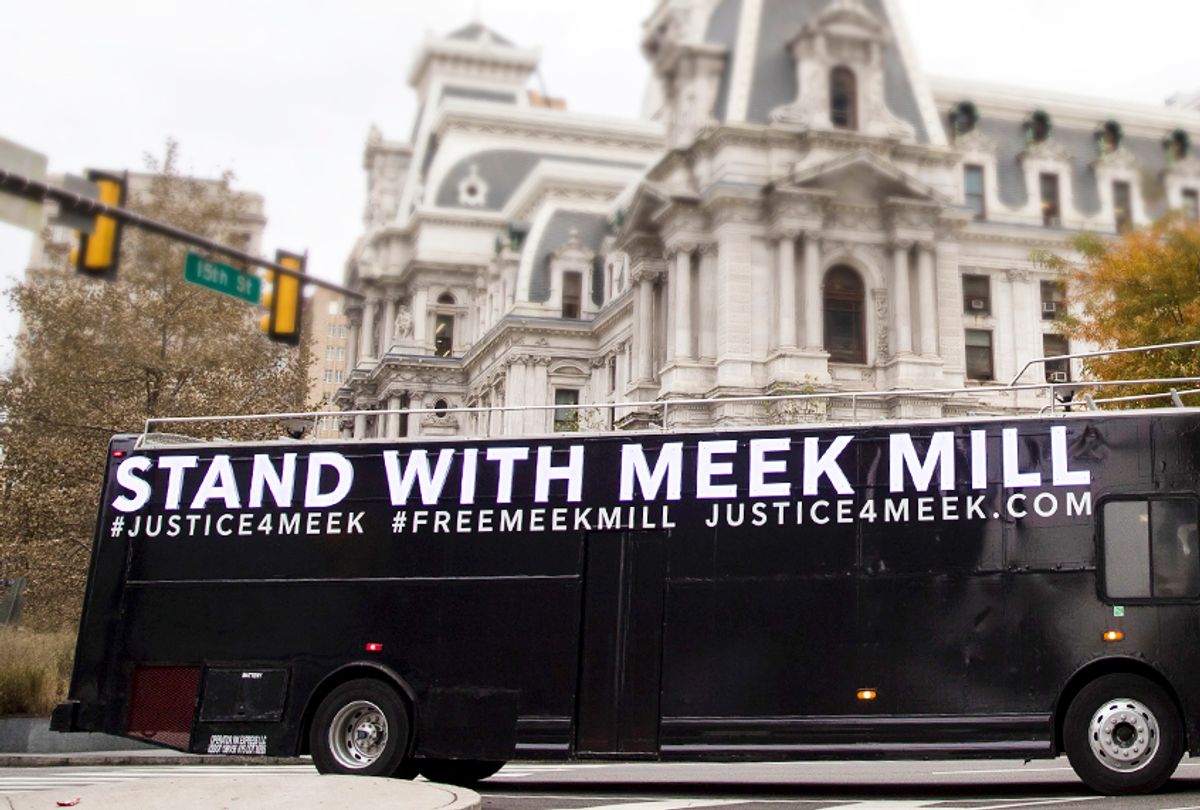 After news broke that Philadelphia rapper Meek Mill (birth name Robert Williams) was sentenced to two to four years in prison for probation violations, against the recommendation of the district attorney and his probation officer, the internet erupted in support.

Hashtags like #FreeMeekMill and #JusticeForMeek made waves on social media, with thousands weighing in. Hundreds more gathered in the flesh on Monday near City Hall in Philadelphia for a rally. Among those present were rappers Rick Ross and T.I., several Philadelphia Eagles players, and numerous prominent criminal justice-reform advocates. All were there to protest Meek's incarceration and to call for a Philadelphia judge's recusal.

They have a solid argument. Meek's attorney has accused Judge Genece Brinkley of inappropriate behavior, bias and taking "a personal interest in the case," according to CNN. Reportedly, Brinkley asked Meek to shout her out in song and counseled him on who should manage him, claims that seem to have sparked an FBI investigation into her behavior.

Shaka Senghor, a formerly incarcerated activist and New York Times best-selling author, who also spoke at the rally Monday, told Salon that another example of Brinkley's inappropriate behavior "was her showing up to his community service." He added that, "Having been formerly incarcerated, it is unheard of for a judge to show up in this manner and to basically pry into his personal life."

Brinkley has presided over Meek's case since his initial conviction in 2008, for which he served eight months in prison. He was arrested twice this year, once for popping wheelies on a dirt bike and once for getting into a fight (those familiar with the case say he was actually trying to break it up). Both charges were either dropped or dismissed, but Brinkley sent him to prison anyway. If her ruling stands, he'll serve substantially more time than than he did for his original conviction.

Indeed, Meek has already spent much of his life under the supervision of the state. He has been on probation for over a decade, a span that's seen him go from 19 to 30 years old. "He’s grown up on probation," Jessica Jackson Sloan, attorney and current mayor of Mill Valley, California, told Salon.

In the last week, Meek's attorney filed for Brinkley's recusal, Meek's release from prison and the official termination of his probation. The rapper was being held in solitary confinement, apparently for his own protection, until Friday, when he was transferred to a different prison and into the general population after his attorney cited mental health concerns about his 23-hour-a-day confinement.

At this point, many prominent voices have criticized the sentence as far too harsh, among them Colin Kaepernick, Jay-Z, Julius "Dr. J" Erving and other athletes, celebrities, criminal-justice advocates and lawmakers. But it's more than just one man they're concerned about.

"Meek’s case is a real opportunity to raise some of the issues around the criminal justice system, particularly parole and probation, and point to the fact that somebody like Meek Mill, who’s been a huge mentor, he’s been an artist, he’s got a successful career, he’s a father, doesn’t need to be in prison," Sloan said. "That doesn’t make us any safer."

The ineffective system of probation and parole has been central to the outrage felt across the country, but most especially in Pennsylvania, where a perpetual probation is the law.

While most states enforce a cap on the number of years someone can be on probation, Pennsylvania does not. Moreover, this endless probation is disproportionately imposed on people who are low-income and of color. Like the incarcerated population in general, that means, disproportionally, people who are low-income and of color wind up back behind bars. In Philadelphia, one out of every three people in prison today is not there because they committed any new crime, but for a technical violation of parole or probation.

"Meek’s case is symbolic of hundreds of thousands of cases out there," Sloan said. "There’s 4.65 million people who are on probation or parole in this country. Even more alarmingly, there’s 61,000 people who are currently in prison because of a technical violation. You see a case like Meek Mill’s, it just highlights the worst injustices in the system."

Senghor explained that when he speaks to people unfamiliar with how easily someone on parole or probation can be sent back to prison, he asks them, "Have you ever jaywalked? Have you ever been late showing up to an appointment? Have you ever failed to pay a bill on time? Most adults answer yes to all three of those things," he said.

As Jay-Z wrote in the New York Times Friday, "For about a decade, [Meek's] been stalked by a system that considers the slightest infraction a justification for locking him back inside." He added, "Instead of a second chance, probation ends up being a land mine, with a random misstep bringing consequences greater than the crime."

Some have criticized the mass organizing efforts supporting Meek, given that he is a man with privilege and means. However, justice for Meek is not the end goal of the movement, but just the beginning. As Sloan says, advocates are working "to organize and to put on the pressure for [Brinkley] to recuse herself and then also to raise awareness, both in Meek’s case, but also to the larger systemic issues that are impacting so many people every day."

In this, Meek's case may open the door for people to understand the plight of the tens of thousands of people incarcerated for technical violations, as well as what life is like for the millions of Americans who live with the kind of conditional freedom that parole or probation designates.

And, yes, Meek's celebrity and wealth grant him some advantages. But his harsh sentence speaks to the way black people are often shanghaied by the criminal justice system regardless of status or justification.

"Meek really is a symbol of hope for them, because a lot of these folks out there know what’s it like," Sloan said. "They understand the outrage of the system because they’ve been through it. They know that this is a piece of our justice system that’s particularly broken."

To care about justice for Meek Mill is not just about offering concern for a rapper from Philly who got a raw deal. It's about turning attention to millions of Americans caught up in a system where, even if you serve your time, you're never really free.