No hashtag without action: Why you should take your activism off-line

Raising visibility on social media is fine. But showing up in person and doing the work is what makes change 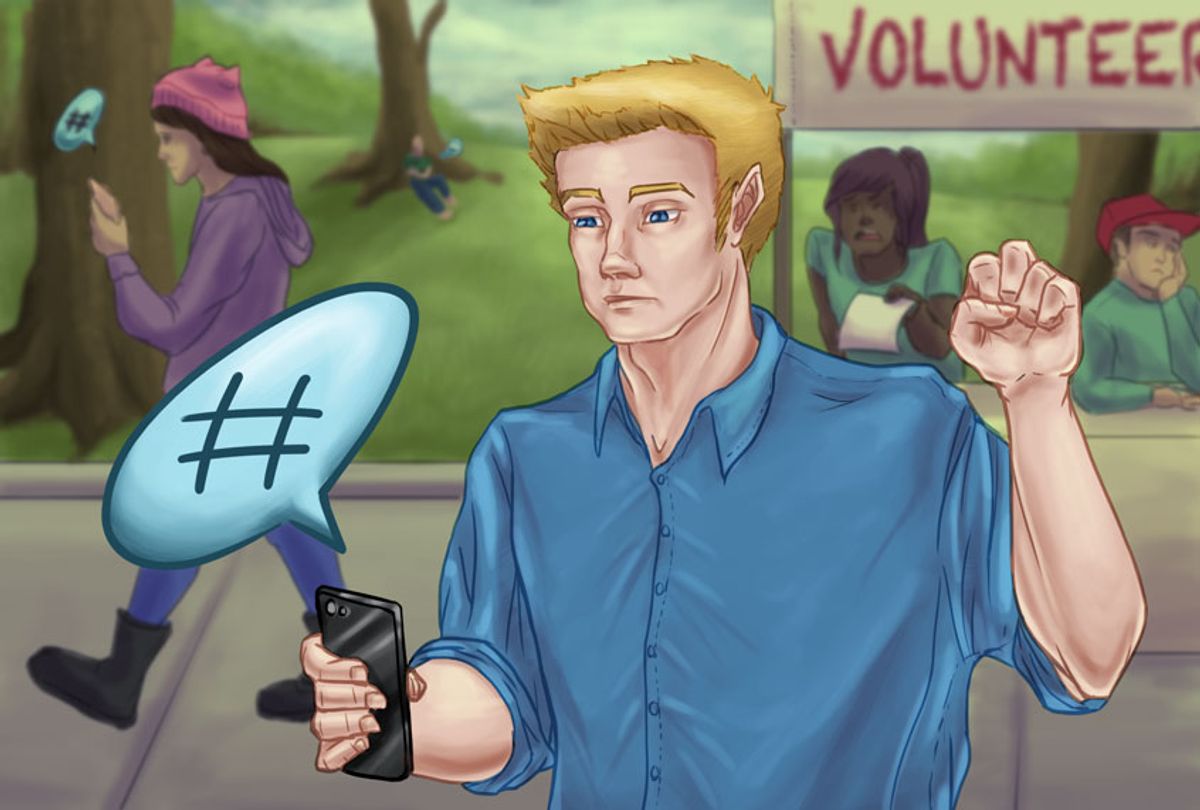 “Yo, D, my Twitter was jumping. You see my threads, bro?” Joseph said. “It’s sooooo crazy how African-American brothers and amazing black sisters are treated in general, and this Trump stuff! It’s not right! I’m ready to flip out and attack a racist.”

Joseph is a nice guy. He cares about these issues, he wears graphic T-shirts with the names of civil rights movement leaders in bold font and uses every viral hashtag except #AllLivesMatter. Lately he’s been really into #ImWithKap. Like even when he posts something mundane like, “My eggs were decent this morning,” it has to end with #ImWithKap.

“I’m glad you are inspired,” I said. “But what do you actually do to help these situations?”

Joseph paused and thought for a second before he responded. You see, he’s a white guy. That doesn’t mean he can’t help — I have white friends who do amazing community work and really make a difference. I think his heart is in the right place, it’s just that he always tells me about Twitter and meet-ups and constantly repeats things that other activists have said. And then he’s always jumping from movement to movement without a clear focus or strategic plan that can lead to any positive result.

“I side with the people, man,” he responded, adjusting his glasses. “I make others aware of our privilege! And I fight against that!”

“But how or who do you actually fight other than other Facebook or Twitter account holders?” I asked. “You tell a white person to acknowledge their privilege and then what happens? Does it transfer to the nearest black guy? Can you denounce your privilege and advance me 65 privilege points so that I can activate them during routine traffic stops?”

“I need help when I do school visits sometimes, and my homie Dez feeds the homeless," I said. "Can we call you?”

“For sure,” he said, slowly raising his black power fist. “Looking forward to chipping in.”

I wasn’t trying to attack Joseph. Like I said, he’s a nice guy. He’s just wasting his skills, time and energy by recycling the same language and actions as everyone else on the internet. He's hashtagging without acting. Joseph is a great artist, and the world would benefit if he put his iPhone down for a while, stopped engaging rejects or following other worthless public activists and helped some kids develop a love for art. If he really wants to make a difference, that would be more effective.

And Joseph is not alone. I’m starting to become disenchanted with online activism because of the trash results. Don’t get me wrong — social media has been the single greatest tool for starting and connecting movements and raising awareness; however, it’s created a ton of pseudo-leaders who play revolutionary without any experience in organizing, grassroots work or human relationships in general. Their only talent is social media, so they rack up huge followings and spread weak ideas that never work. The end result is Facebook and Twitter feeds are full of people who think simply acknowledging white privilege elevates people of color, that hating men makes you a better feminist and recycling the borrowed ideas of a digital revolutionary makes you a change maker.

Stop it. Go out into the world and spread real love, because 20 years later we’ll all be in our 40s and 50s and if activism remains the same, nothing will be different except the new hashtags created for the new victims.