Why are corporations undermining public education?

As the economy grows ever more unequal, corporations seek to lower expectations of what Americans are entitled to 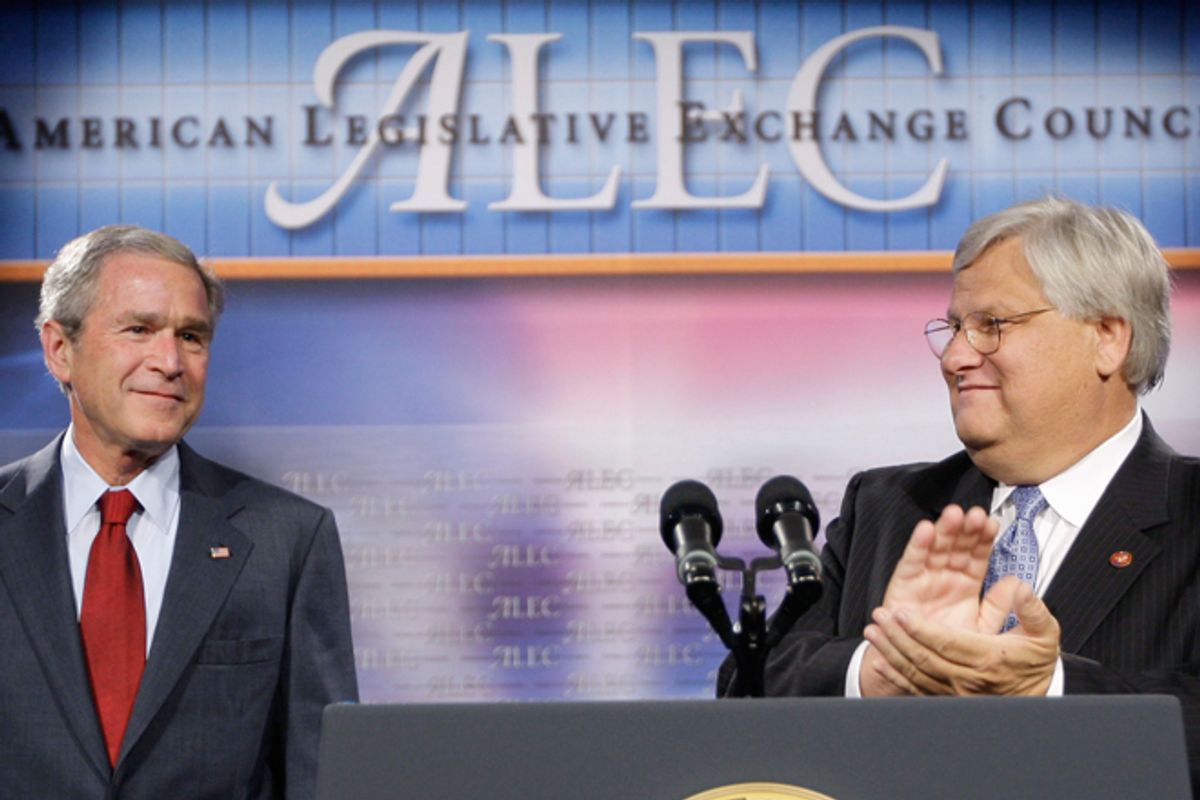 In the wake of the Great Recession, the corporate lobbies engineered an unprecedented wave of legislation, aimed at lowering labor standards and slashing public services in state after state. But while high-profile attacks on labor unions, as in Wisconsin, garnered the headlines, the top legislative priority of ALEC and the Chamber of Commerce was the privatization of public education.

In the latest episode of the Have You Heard podcast, AlterNet education editor Jennifer Berkshire talks to economist Gordon Lafer, author of The One Percent Solution: How Corporations are Remaking America One State at a Time. Lafer argues that corporate-led education reform has little to do with improving schools or expanding the life chances of urban youth, and is supported by neither evidence or the popular will. The real aim is to dissolve the institution of public education, undermining the very idea that education is an entitlement government is responsible for providing.

Jennifer Berkshire: Your new book, The One Percent Solution, tracks all of the laws passed at the behest of the corporate lobbies in the wake of the Great Recession. Public education is at the heart of the story you tell, specifically the efforts by corporations to weaken it. What’s going on here?

Gordon Lafer: I think part of what's going on is this. The people at the very top of the economy believe that America is an empire in decline and the country is going to keep going down. They don't see it rebounding. For them, the political problem is how do they manage the politics of decline. How do they pursue a policy agenda which is going to make the country yet more unequal, which is going to make the rich richer and the majority of people's lives materially worse off without provoking a political backlash?

JB: You make the case that the interest of corporations in our public schools has less to do with inflating their bottom lines than with lowering our expectations for what we’re entitled to. Explain.

GL: I think part of what the of the agenda of the corporate elite for preventing political backlash is to ignite something like a revolution of falling expectations. So if I  my daughter is in a class with 37 kids, which my daughter is, at least it’s not 45. Or they only have music and art nine weeks a year but at least they still have it nine weeks a year. I don't have comprehensive health insurance—I only have catastrophic health insurance. But at least I have catastrophic health insurance and for now I'm ok. I don't have any paid vacation but I have a job and I'll have some time off between this job and my other job... The more we ratchet down our expectations of what we think we have a right to expect, the more we normalize downward mobility.

JB: You have a great quote in your book from the head of an ALEC-funded think tank who says that K-12 education is the last remaining socialist enterprise in the US. When you think about it, he’s not wrong.

GL: Education is a major major public good where we tax the rich in order to provide a public benefit that you get just by right of being a citizen. When they talk about needing to do away with the entitlement mentality. The most problematic entitlement for them is not Medicare or Social Security. It’s education.  And I think education is even more of a problem for them than other things because teachers are trying to raise to encourage kids to think they can do more to raise your sights higher to think you could be something you didn't think you could be to think you might have a right to expect something that you didn't have in your head when you walked into the classroom.And that's dangerous.

JB: Unions have been a particular target of the corporate lobbies, especially teachers unions. In Wisconsin, for example, the wages of teachers dropped by more than 10% after the passage of the infamous Act 10, which gutted collective bargaining in the state. Talk a little about the spillover effect that has on the wages of non-union workers.

GL: It has a competitive effect on driving down wage and benefit standards for nonunion private sector employers in the same labor market. I can give you the example of where I live in Eugene Oregon. The biggest employer is the University of Oregon. So let's say secretaries at the University of Oregon get health insurance because they're unionized public employees. That means that a nonunion private sector employer who wants to hire secretaries needs to, if not match, at least come up towards the union standard or else live with the knowledge that the best people are going to go work for the university if they can. So the same is true in reverse. When they cut down unions, when they undermine the wage and benefit standards of major employers, which almost everywhere the school system, it has a follow on ripple effect for people who work in the nonunion private sector.

JB: As you point out, the specific elements of the corporate education agenda are actually extremely unpopular. When people are given the chance to vote on issues like whether they want to see class sizes increased or students required to take classes online, the result is a resounding and often bipartisan “no.”

GL: That’s right. When people get to decide on an issue by issue basis, which is most often on ballot initiatives, the corporate agenda on an issue by issue basis is a very unpopular and unpopular across party lines. I want to give you a couple of examples. Florida had class size caps written into its Constitution—good caps like 18 kids from K to 3 and something like a limit of 24 kids per class in the later grades. The legislature wanted to get rid of them, but because it was in the Constitution they needed to take it to the voters, who rejected the measure by a 60-40. Now this was the Tea Party wave election in 2010 when Florida elected a Tea Party Governor Rick Scott and elected a very right wing legislature. If you do the math several hundred thousand people had to go to the polls in 2010 in Florida thinking something like I hate government I hate Democrats I hate unions but I want my kid in small classes.

We saw the same thing in South Dakota and Idaho—two very red states whose legislatures passed laws doing away with tenure and mandating “merit pay” based on test scores, and requiring kids to take an online class as a condition of graduating high school. Voters overturned all of that in referendum. This is not California this is Idaho and South Dakota. So I think there's a very fertile ground for pushing for a more humane version of education across in places where we can make the fight be about the specific issues as opposed to about personalities or political parties.

Gordon Lafer is the author of The One Percent Solution: How Corporations are Remaking America One State at a Time.  This is an edited transcript.