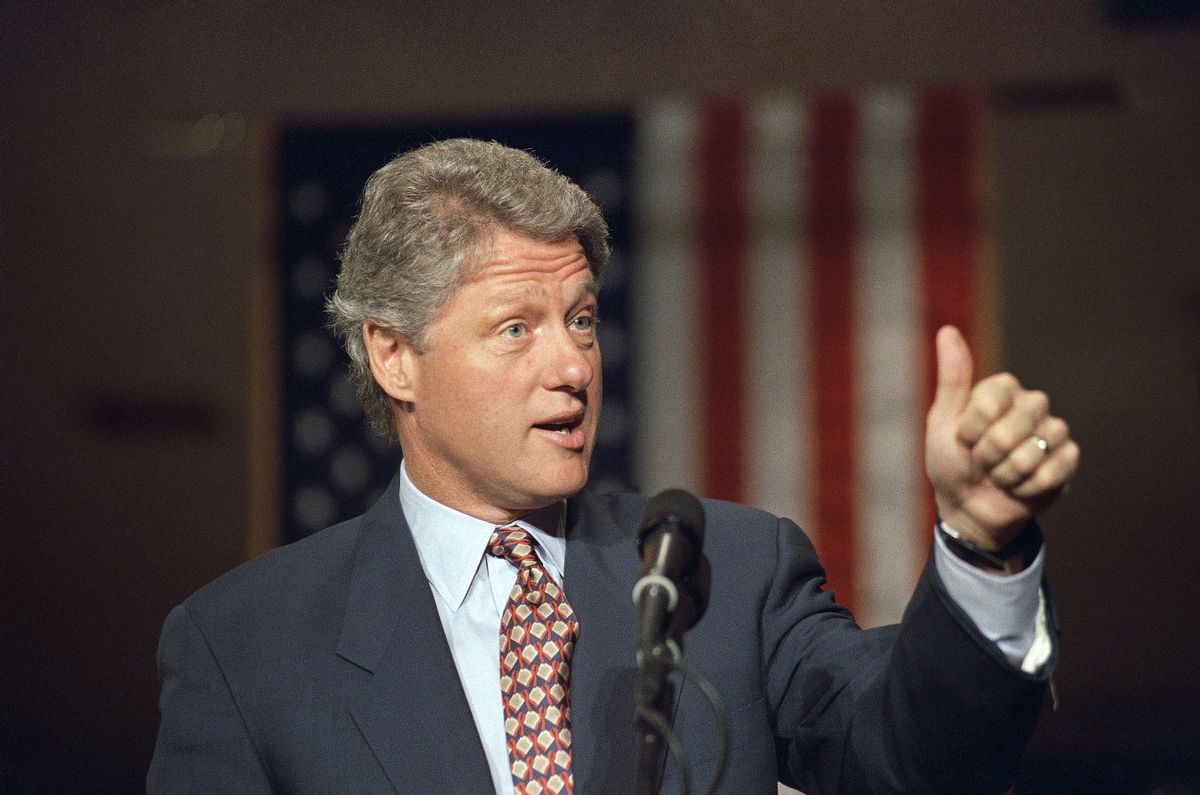 Democratic presidential nominee Bill Clinton gives the thumbs up sign as he speaks to a gathering at the University of Toledo in 1992. (AP)
--

This article originally appeared on The Perspective.

Bill Clinton was the first Democrat to get re-elected in 50 years. He oversaw the country during a revolutionary time of progress and economic growth. However he also tarnished his reputation with many harmful policies. Still, he remains one of the most popular US presidents of all time. How justified is this popularity really? Here are three arguments for either side.

Killing welfare as we knew it

Bill Clinton hugely undercut the American welfare system. He reduced the amount of American families that received welfare from 4 million to 1.6 million. His policies contributed to benefits falling by 32.5%. Clinton believed that a strong economy would lift Americans out of the need for welfare, but he was deeply mistaken. At the peak of the 2008 financial crisis 8 million people were left with only food stamps as income. Most didn’t even apply to the program because they knew that not enough money was available to support them. Today there are 7 million children and teenagers living in deep poverty, in part because of his administration.

Bill Clinton introduced what would become a trend of transferring jobs outside of the US. His export agreement with China and NAFTA enabled American companies to profit from cheap labour abroad. 700,000 manufacturing jobs disappeared. Corporations became more likely to cut wages and benefits. Additionally, the cheap sale of farm products to Mexico put millions of Mexicans out of work and boosted their coming to America illegally.

Champion of the prison-industrial complex

Bill Clinton laid the foundation for today’s prison-industrial complex and bolstered the war on drugs. Excessively tough on crime, his policies had an especially adverse effect on black communities. He introduced crime bills such as the “three strikes” law, which made three felony convictions result in a life sentence. Penalizing petty and non-violent crime with mandatory minimum sentences became the norm as several states took inspiration from Clinton’s crime strategy. Over his tenure the prison population doubled from 600,000 to 1.2 million people, an incredibly high human cost for an insufficient result.

He ushered in a new era of American prosperity

Firing up the economy

Clinton enacted intelligent fiscal policy, transforming a national deficit of $290 billion in 1992 to a national surplus of $ 236.4 billion by 2000. He increased taxes on the upper middle class and large corporations. Ending subsidies for some companies and generally reforming the tax code, Clinton raised huge amounts of money for the government. Smart spending cuts then made sure that it would save instead of racking up debt. This created the largest national surplus in America’s history.

Keeping the US out of wars

Clinton’s time in office saw the US involved in no major conflicts for a significant period. While the country intervened in small ways, this never led to full-on war. He was a president that preferred negotiation over intervention. In fact he got incredibly close to brokering a peace agreement between Israel and Palestine. Clinton also managed to negotiate with North Korea. His Agreed Framework of 1994 kept nuclear weapons out of their hands for 8 years.

Bill Clinton created more jobs than any president in US history. In 1992, the year before he took office, unemployment was at 7.5%. His policies reduced it to 4% by the time he left. 23.9 million jobs were created over his eight years in the White House, at an average of 242,000 per month. Wages went up, the rate of homeownership reached a historic high of 67.7% and the poverty rate fell to 11.8%. Between 1993 and 1999 the real median family income went up by $6000.

Under Bill Clinton’s governance a new chapter of success started as countless Americans were able to get jobs and buy homes. But while the middle class surged the poor either went hungry or got locked up. In weighing his successes against his flaws we have to ask ourselves what factors we value most in judging his legacy.

This article was written in collaboration with The Perspective, where you can explore two sides of current events, historic and classic debates. The award-winning site employs design and psychology to make it easier to consider ideas that are different from your own.