With a huge tax cut bill in doubt in the Senate, the White House refuses to dump the disgraced Alabama Republican 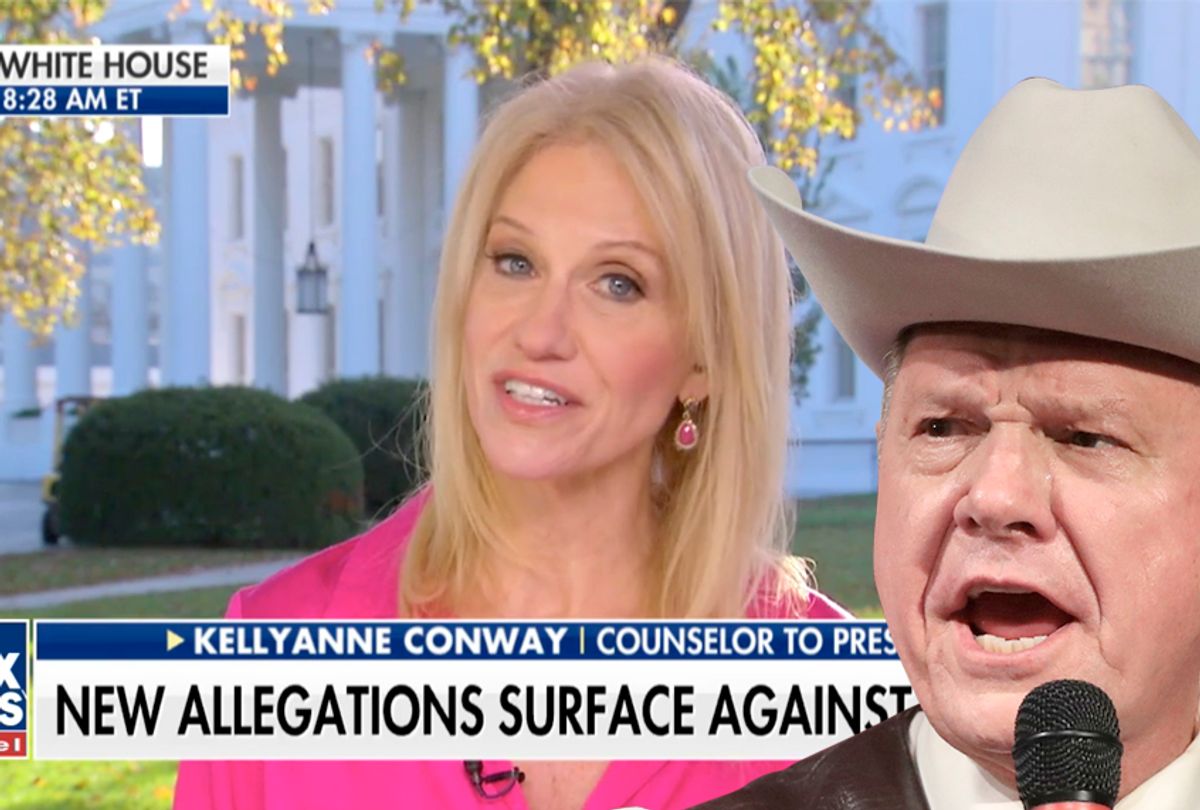 White House counselor Kellyanne Conway provided the surest sign yet of worsening prospects for the Republican tax bill in the U.S. Senate when she effectively endorsed the scandal-plagued Roy Moore in a Monday appearance on "Fox & Friends."

Conway's comments reflect a shift from the earlier White House position on the accusations that Moore had sexually molested two teenage girls. Previously, administration officials had indicated that Moore, a former Alabama judge, should end his Senate candidacy "if the allegations are true." As public opinion surveys began indicating that Moore's Democratic opponent, Doug Jones, has been gaining support in light of the scandal, however, the Trump administration has softened its tone. While a number of prominent Republicans have called on Moore to quit his campaign, Trump officials have refused to do so.

Last Thursday, White House press secretary Sarah Huckabee Sanders indicated that Trump did not wish to pass judgment on Moore's innocence or guilt. "He thinks that the people of Alabama should make the decision on who their next senator should be," she said.

By Monday, Conway indicated an even stronger turn toward Moore as she attacked Jones as a "doctrinaire liberal" during her Fox News appearance.

“Doug Jones in Alabama, folks, don't be fooled. He will be a vote against tax cuts," she said. "He is weak on crime. Weak on borders. He is strong on raising your taxes. He is terrible for property owners."

“I’m telling you that we want the votes in the Senate to get this tax bill through,” Conway responded, when asked if she was telling people to vote for the embattled Christian right politician.

Almost certainly, the changing White House line on Moore is related to the fact that Republicans have only a two-vote margin in the Senate meaning and that already, Maine Sen. Susan Collins has effectively indicated that she will not support the GOP's large tax cut package, meaning that the party can spare only one other vote.

On Sunday, Trump took to Twitter to rail against Sen. Jeff Flake, claiming that the anti-government Arizonan would vote against the GOP's tax proposal.

"Sen. Jeff Flake(y), who is unelectable in the Great State of Arizona (quit race, anemic polls) was caught (purposely) on 'mike' saying bad things about your favorite President," Trump wrote. "He’ll be a NO on tax cuts because his political career anyway is 'toast.'"

Flake, who will be resigning his office rather than seek election next year, is one of several Republican senators who have balked at the Republican tax plan. Wisconsin Sen. Ron Johnson has also stated that he opposes the GOP proposal because, in his view, it discriminates in favor of larger companies against smaller "pass-through" limited liability corporations. Other skeptics of the current bill include Indiana's Todd Young and Tennesee's Bob Corker, both of whom have expressed concerns that the Republican legislation would add to the national debt.