Roy Moore is proof the GOP is eager to rig elections

This time there's no fake Democratic threat, just a Republican they want to stop any way they can 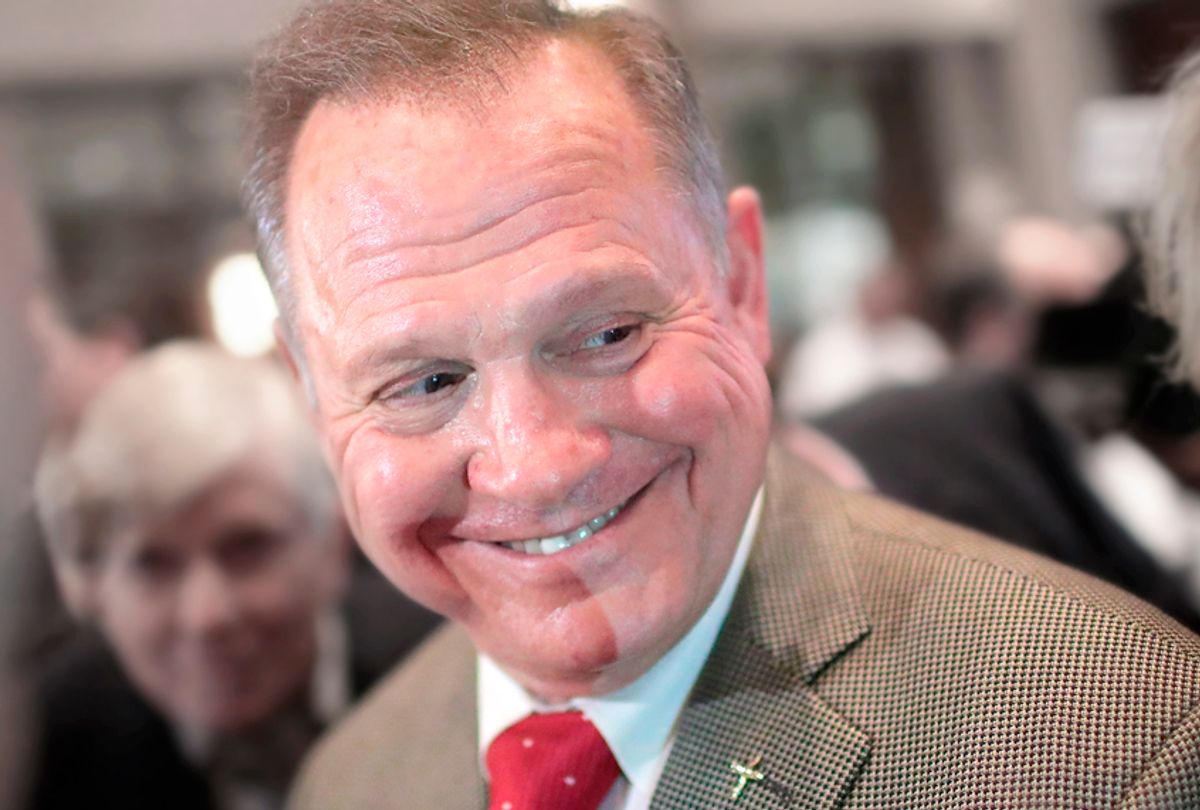 The strange saga of Roy Moore’s senatorial bid in Alabama has made one thing clear: Nobody should doubt that the GOP is the modern political party most eager to rig election results—even when the target is a fellow Republican.

Recent days have seen the best minds in the current generation of Republican strategists contorting election rules in every imaginable way to try to stop Moore from becoming Alabama’s junior U.S. senator next month.

Some of these exchanges have been chronicled on election law blogs, where for years, Republicans have defended their catalog of partisan voter suppression tactics (led by the big lie they were protecting the process from hordes of Democrats impersonating other voters, despite never offering serious proof). But now that an apparent sexual predator is refusing to exit the race, despite calls by Senate Majority Leader Mitch McConnell and other top Republicans, the party’s best and brightest have been exploring every possible angle, including canceling December’s special election.

Astoundingly, as of Thursday, the stop-Moore contingent has come up empty-handed. They have been thwarted by the calendar, Alabama’s sitting Republican governor and small details like the U.S. Constitution's 17th Amendment (in part governing the election of senators after a vacancy). But how they tried!

Perhaps the best exchange was captured on ElectionLawBlog.org, where scholar and blog founder Rick Hasen recounted his to-and-fro tweets with conservative media personality Hugh Hewitt, who, “at first… suggested canceling the election altogether, and letting [Alabama Sen. Luther Strange, who lost a primary to Moore] just complete the term.”

That was a wonderful addition to Republican voter suppression canon: don't hold an election at all.

“I protested that canceling an election already underway (military and other absentee voters have already voted) is profoundly undemocratic and dangerous,” he replied. “It also appears to violate the 17th Amendment, which requires that an appointment of a temporary senator be temporary, and that the state schedule a replacement vote.”

Hewitt relented, Hasen noted, but not until a better idea emerged: “Eventually Hewitt relented on this point; not because he thought it was undemocratic—indeed he seemed to believe Republicans are somehow entitled to Alabama’s two Senate seats without an election—but because he thought it would violate the 17th Amendment,” Hasen wrote. “So he hit on another idea, and according to Politico it is an idea Republican leaders nationally are now weighing: get Luther Strange, the temporary senator appointed to replace Jeff Sessions, to resign, and then with the new vacancy, declare this election void and start over.”

Here’s where the GOP got blocked by the weedy details. After Sessions resigned, the state’s previous governor appointed Strange to the Senate and set a date for a special replacement election. The big surprise, to Senate Republicans like McConnell, was that Strange lost that race’s primary to Moore.

These Washington Republicans weren’t excited about Moore before half a dozen women accused him of predatory sexual behavior. But Alabama’s Republican Party was standing by its nominee, frustrating the Senate Republicans. So then GOP leaders started looking at other scenarios, such as, could they get Sessions to resign as Attorney General to run for his old Senate seat? No. Could they get find another well-known Republican to run a write-in campaign? Not likely. Could Strange resign before December’s special election, triggering a new vacancy and possibly a new election?

“The election date is set for Dec. 12. Were he to resign I would simply appoint somebody to fill the remaining time until we have the election on Dec. 12," Alabama Republican Gov. Kay Ivey told AL.com on Wednesday, dashing that last theory.

That left two possibilities. Moore could lose the election to Democrat Doug Jones, narrowing the GOP’s Senate majority to one seat. Or, should Moore win, the McConnell gang could seek to expel him from the Senate, but that takes time and a two-thirds vote.

“There’s a Senate norm, apparently, of not expelling for conduct before taking office that voters knew about,” Hasen blogged, noting Senate tradition. “Do senators violate this norm? It takes two-thirds to expel. What if Democrats, either following this norm or sticking it to Republicans, don’t vote to expel? Then Moore is a constant national story, and a reminder of what the Republicans are trying to avoid… No wonder Republicans are contemplating a constitutional Hail Mary.”

Thus the GOP has once again seized the spotlight as the party most enthusiastic about rigging elections—or doing whatever it takes to get the outcome they seek.