Foreign policy consensus in Washington isn't always a good thing. With this man's finger on the button, we need it 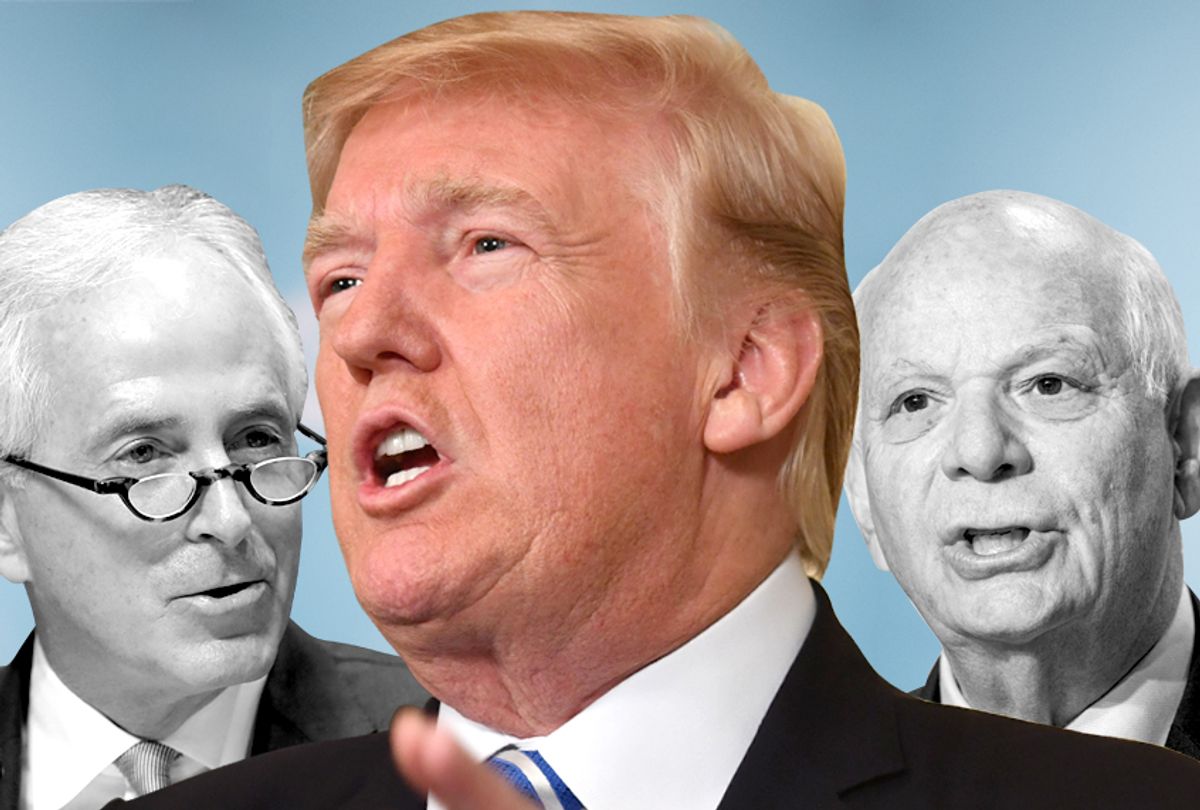 President Trump has been back from his embarrassing Asian trip for a week now. He is still embarrassing the nation by declaring that he should have left some American college athletes in jail in China because one of their fathers failed to show him proper personal fealty:

Trump has always been petty, but this was particularly obnoxious. He had already demanded gratitude from the players themselves, and they had thanked him publicly for speaking to the Chinese president on their behalf. He simply couldn't rise above his voracious need for approbation to let LaVar Ball's criticism go and behave like a mature statesman. Worse, he showed foreign leaders once again that he can be manipulated through even the smallest slights or granting of favors. The man simply cannot play it cool.

His trips overseas have shown that he knows nothing of diplomacy and has no natural instinct for it. Trump has been rude and aggressive toward America's European allies until they figured out that he needs to be treated like a spoiled dauphin and treated to big spectacles, as French President Emmanuel Macron did when he invited Trump to the Bastille Day celebrations in July.

The British had originally planned for him to come for the traditional state visit but had to rescind the invitation after Trump demanded to ride in the golden carriage with the queen and security measures became too onerous. (The British people largely hate Trump and massive protests were expected.) But Middle Eastern and Asian leaders had his number from the beginning. They fêted Trump with parades and pageants and had him eating out of their hands.

But our president isn't just clueless when it comes to diplomacy and statesmanship. He's clueless about all of foreign policy and national security. The Washington Post reported last week that many Europeans now believe that "President Trump in person is no longer the voice of the free Western world" because “the problem is that people don’t know anything. They are quite open about it. . . . It doesn’t matter what level. It is all levels.”

As we already know, last summer Secretary of State Rex Tillerson became so exasperated by Trump's unwillingness to listen to anyone who knows anything that after a particularly frustrating meeting -- in which the president expressed a desire for what would amount to nearly a tenfold increase in the U.S. nuclear arsenal -- Tillerson told some of the people in the room that the president was a "f***ing moron."

Not long after that, Sen. Bob Corker began to speak out about the president's behavior, saying that Trump had "not yet been able to demonstrate the stability nor some of the competence that he needs to demonstrate in order to be successful." Corker later told The New York Times that he feared Trump was in danger of starting World War III. On Monday, BuzzFeed reported that during that same period, National Security Adviser H.R. McMaster called the president an “idiot” and a “dope” with the intelligence of a “kindergartener," at a private dinner.

Corker is the only one of these people who's on the record. Tillerson has refused to comment on what he did or didn't say, and McMaster has denied the BuzzFeed report. But the reason people believe this so easily is because the reported comments are so obviously accurate. The president is clearly way in over his head.

Susan Glasser at Politico magazine reported on Monday that this has brought about what she terms "an example of a surprising and unintended side effect of Trump’s disruptive approach to the world": bipartisan agreement. Granted, that is only manifesting itself on the Senate Foreign Relations Committee, but that may be where it's most needed to deal with the national security challenges posed by Russia, North Korea and Iran, all of which are being bungled by Trump in dangerous ways.

Corker is the committee chairman, and as mentioned has been vocal in his concerns about the president's ability to deal with these problems. Glasser interviewed Sen. Ben Cardin of Maryland, the ranking Democrat on the committee, who listed a number of issues on which the panel has achieved consensus in opposition to the Trump administration. These include the mandatory Russian sanctions in response to the election interference, which passed the Senate 98-2; insisting on diplomatic efforts in North Korea; and maintaining the Iran nuclear deal, all of which have been opposed by the president.

In more than two decades of observing Capitol Hill, I can’t remember a comparable moment when the generally staid Foreign Relations panel has been so assertive toward the president, especially given that Congress and the White House are controlled by the same party. To do so, you’d probably have to reach all the way back to the Vietnam era, and the skeptical hearings about the war held by the late, legendary Chairman William Fulbright.

This is, to say the least, unusual in our current state of polarized partisan warfare.

This does not mean that the Congress can easily reverse the effects of decades of abdication of its duty to participate equally in the national security policy of the country, however. The presidency is now tremendously powerful in these matters, and it has more often than not been true that the "foreign policy consensus" in Washington led us down the path to bad wars and immoral policies. But in this case, it is a welcome exercise of what power they have, which can perhaps mitigate Trump's worst instincts.

The committee sent a loud message last week when it convened a hearing on the president’s authority to order a nuclear strike. Cardin told Glasser that this was meant as a "senatorial rebuke" of the president's reckless “fire and fury” rhetoric. He said, “Congress is looking for a way to assert itself in that regard."

Trump has told the press that he listens to everyone, but his decision on North Korea is the only one that matters. That's actually not true. Last weekend, the man in charge of carrying out the order to launch a nuclear strike, Air Force Gen. John Hyten, commander of Strategic Command, said that he would tell Trump he couldn't carry out an illegal strike. Lawmakers haven't spent much time in recent years contemplating the possibility that an unstable, temperamental president would launch a first strike. Now that we have one, they have no choice.

A strong bipartisan message that Trump does not have unlimited power to start a nuclear war isn't really meant for him -- it's meant for the general who must decide whether or not he's been given a legal order. For the sake of the planet, he needs all the clarity he can get.