It's time to investigate the sexual assault charges against Donald Trump

Donald Trump got a pass during the campaign on numerous accusations of assault. We need a new special prosecutor 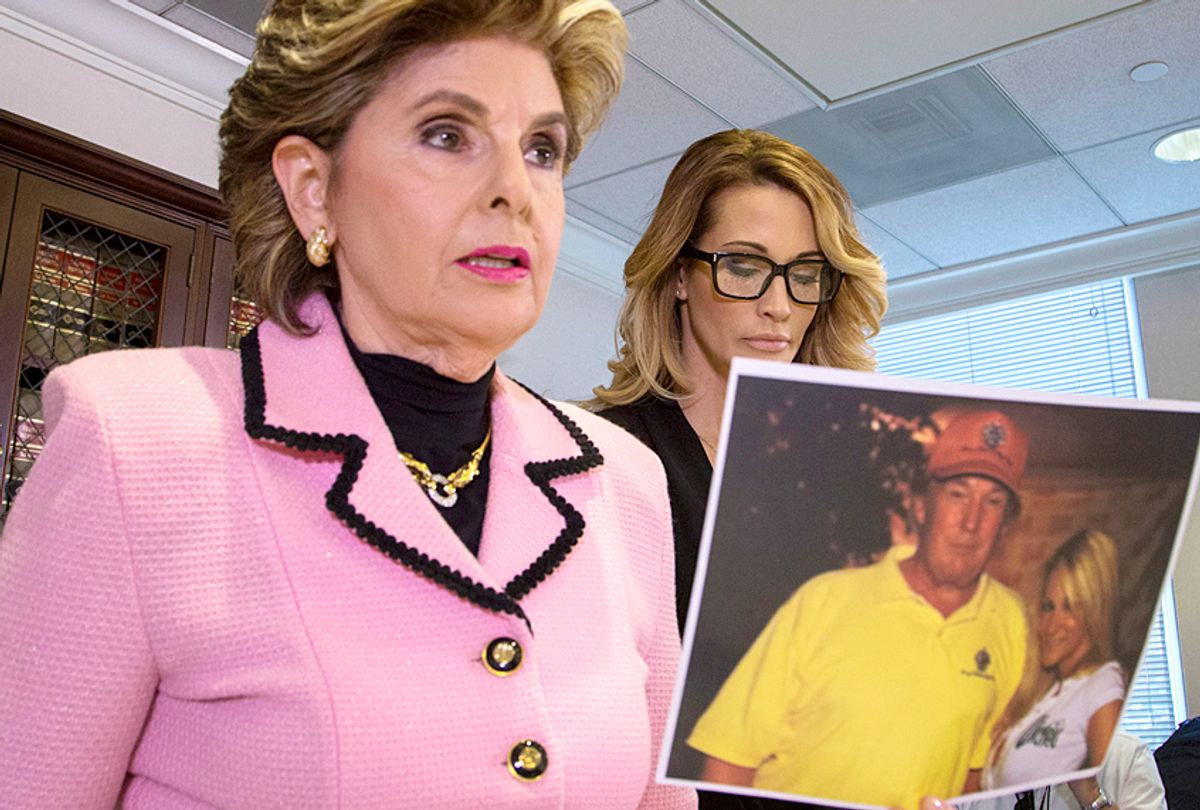 Attorney Gloria Allred holds a photo of jessica drake (R) with Donald Trump, taken in 2006 where Drake alleges Trump behaved in an sexually inappropriate way toward her. (Getty/David McNew)
--

It's now been more than six weeks since a New York Times exposé about Harvey Weinstein triggered a flood of people stepping forward with stories about being sexually harassed by powerful men. Last week, the news cycle was swamped with accusations against Alabama Senate candidate Roy Moore and Minnesota Sen. Al Franken. This week, there is another accusation against Franken and an explosive Vox story reporting that numerous women say New York Times star reporter Glenn Thrush kissed and manhandled them against their will, and then talked smack about them at work afterwards.

In the midst of all this, it's absolutely stunning to realize that the sitting president of the United States, Donald Trump, continues to evade any consequences for the numerous accusations of sexual assault and sexual harassment made against him by women who had nothing to gain by going public. His press secretary continues cheerfully deflecting questions by suggesting that Trump's accusers, all 16 of them, are liars. Trump himself calls the whole thing "fake news," even though there is literally a taped confession where he brags about forcibly kissing and grabbing women, because "when you’re a star, they let you do it." In case you have forgotten the details of Trump's boasting, here they are:

I moved on her like a bitch. But I couldn’t get there. And she was married. Then all of a sudden I see her, she’s now got the big phony tits and everything. She’s totally changed her look. . . . I better use some Tic Tacs just in case I start kissing her. You know, I’m automatically attracted to beautiful — I just start kissing them. It’s like a magnet. Just kiss. I don’t even wait. And when you’re a star, they let you do it. You can do anything. . . . Grab ’em by the pussy. You can do anything.

“I feel this issue has been ‘on hold’ all year, but not forgotten," Natasha Stoynoff, who accused Trump of pushing her against a wall and shoving his tongue in her mouth, recently told People.

Stoynoff is right — the issue has been dropped, outside of some daily liberal grumbling about it. The reason for the lack of official response in Washington is simple enough: Republicans are protecting their president and have zero interest in instigating an investigation, much less considering legal consequences that could in any way slow down their efforts to destroy our health care system and slash taxes for the rich.

As for the media, part of the problem is that there's nothing new to say about the allegations. Reporters can keep asking questions, but they'll get the same flat denials they've been getting for more than a year. No new women have stepped forward and there's no new evidence to gather, as far as I can tell, about the existing allegations. Trump's strategy of hunkering down and waiting out the news cycle is extremely effective when it comes to stories like this, which die from lack of breaking developments.

There is one solution that hasn't been, as far as I know, floated yet: The Justice Department could appoint a special counsel to open an investigation into the years of accusations against Trump.

Yes, there is already a special counsel, Robert Mueller, investigating the Trump campaign and the Trump administration. But Mueller's focus is entirely unrelated to the allegations of sexual abuse or assault made against Trump over the years. He's focused on figuring out what corrupt relationship the Trump campaign may have had with Russian agents who sought to steal emails and interfere with the presidential election. The allegations of sexual misconduct deserve a separate investigation. Ideally, the Justice Department would hire a prosecutor who has experience in dealing with sex crimes, much in the way that Mueller has experience dealing with criminal corruption investigations.

The Mueller investigation has shown how an ongoing investigation can keep a story in the news, as reporters dutifully report on any investigation movement that gets leaked to the press. A new investigation into accusations that have haunted Trump's private life for years would also likely cause the president to get anxious, and everyone knows he expresses anxiety by tweeting rude things that invariably get covered by the press, generating more coverage. Most importantly, a special prosecutor could issue subpoenas and create a deeply researched record of the accusations by these 16 women and whatever evidence can be found to support them.

As is true with the Russia investigation, it's quite possible that Republicans will take action to shield Trump from legal consequences. Some reports suggest Mueller is thinking of ways around that trap, such as teaming up with state attorneys general in order to create non-federal charges and indictments that put Trump cronies beyond the reach of presidential pardons. That avenue would also be open to any special prosecutor dealing with the sexual abuse allegations — any illegal actions that might discovered would fall under state laws, creating opportunities for similar partnerships with attorneys general.

Most important of all in the current climate, there needs to be a full accounting of exactly what Donald Trump has been accused of doing and what the evidence against him looks like. The lack of such a report becomes more glaring every time another man is publicly accused of abusive behavior — especially in cases, such as the Washington Post's reporting on Roy Moore or the New Yorker's reporting on Weinstein, where the allegations have been exhaustively researched.

To state what is unfortunately obvious, there's very little reason to believe that the Justice Department, which is run by Trump's hand-picked attorney general, Jeff Sessions, would be remotely interested in opening up a second investigation into this whole other series of potentially criminal allegations against Trump. But just because it isn't likely to happen anytime soon is no reason not to push for it. A pressure campaign aimed at demanding a special investigation into the amply documented sexual misconduct allegations against the president of the United States could be a clarifying moment, at the very least. It could also make it much more difficult for Trump to wait out the current controversy it and let the story die on its own.