The Army has promised a bloodless rebellion against President Mugabe, but there’s good reason to doubt their claims 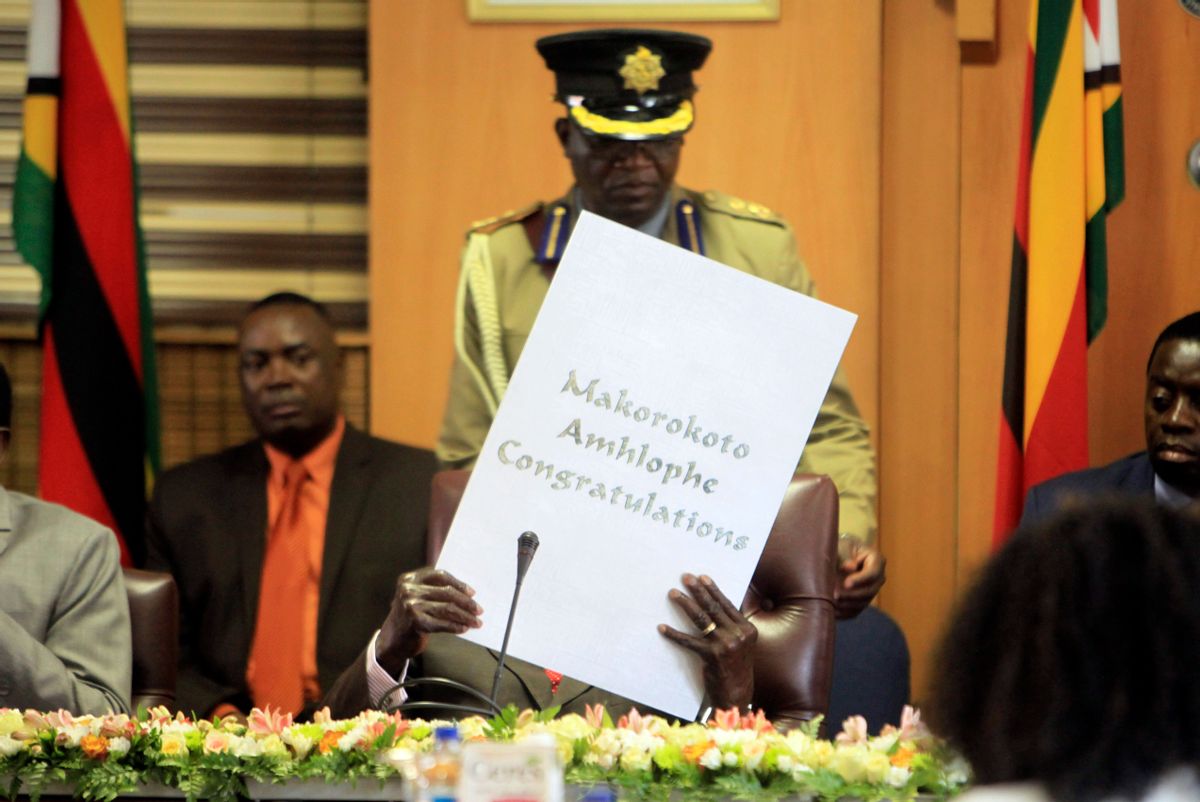 Zimbabwe's President Robert Mugabe reads his birthday card as he marks his 93rd birthday at his offices in Harare, Tuesday, Feb. 21, 2017. Mugabe described his wife Grace, an increasingly political figure, as "fireworks" in an interview marking his 93rd birthday. (AP Photo/Tsvangirayi Mukwazhi) (AP)
--

On Nov. 14, a group of soldiers from the Zimbabwe Defense Forces arrested and detained Zimbabwean President Robert Mugabe. The move came just days after Army Commander Constantine Chiwenga warned that the military would not “hesitate to step in” if Mugabe did not cease to “purge” his government of independence war veterans.

The armed forces have taken control of the government and the state broadcaster. Mugabe’s wife has fled the country.

The Zimbabwean Army nonetheless insists that “this is not a military takeover of government.” Even as tanks patrol the streets of the capital, Harare, and the tap-tap of military-issue boots echoes across the corridors of power, the generals repeat that old refrain: They just want to restore order and improve Zimbabwe’s ailing economy.

Their intervention, the generals insist, is a patriotic act that will improve life for all. And while it is true that Mugabe is a ruthless despot who has woefully mismanaged Zimbabwe for the past four decades, a military coup is not the right way to end his reign.

World history is full of atrocities committed in the name of law and order. The international community should be concerned about what’s happening in Zimbabwe right now. I’m an Argentinean scholar of Latin American militarization, and I can attest that so-called “democratizing coups” are largely fiction.

Atrocities in the name of progress

Latin America offers a perfect cautionary tale for those who believed Zimbabwean Major General Sibusiso Moyo when he promised a bloodless rebellion.

For much of the 20th century, most Latin American nations saw some form of military dictatorship. Some countries, Paraguay and Nicaragua among them, spent long periods of the last century under the rule of individual dictators — men who, like Mugabe, were protected by their very own Praetorian Guard.

These military men generally claimed to be patriots defending their people. All of them failed spectacularly to do that, even if they did occasionally grow the economy.

Mostly, the region’s totalitarian regimes excelled at violence. Jailing, killing and torturing their political opponents, Latin America’s dictatorships sought to annihilate their detractors. They controlled the media, censoring free expression and foisting their nationalistic ideology upon citizens. They used secret police to root out and punish civilian dissidents.

Latin America began ousting its dictators in the 1980s. Despite some signs of continued fragility — Honduras’s 2009 coup, for example, and the attempted removal of Paraguay’s president in 2012 — in general democracy has made huge inroads in the region over the past 40 years.

Ridding countries of their militaristic culture, though, has been tougher. That’s another lesson for Zimbabwe: After one military coup, civilian control over the armed forces is never again a done deal.

In September 2017, Brazilian Gen. Antonio Hamilton Martins Mourão reawakened old fears when he assured people that the military was prepared to intervene to save the country from its spiraling political and economic crisis. If the situation doesn’t stabilize, he warned, the armed forces would “have to impose” stability.

Currently, a front-runner in Brazil’s 2018 presidential election is the former Army Captain Jair Bolsonaro. He openly prefers the order of military rule to the mess of liberal democracy.

And in Venezuela, Nicolás Maduro’s military autocracy now clings to power thanks to a fierce propaganda machine and the armed forces’ willingness to crush dissent. In August, some people seemed to welcome an apparent rogue military faction threatening a government overthrow.

That’s because military rulers and military propaganda leave a society — some portion of it, at least — deeply susceptible to the idea that only righteous men in uniform can save it. In 2009, Vanderbilt University’s LAPOP survey program found that a remarkably high percentage of Latin Americans living in high-crime countries would support a military intervention aimed at reducing violence.

Fully 71 percent of Guatemalans, 64 percent of Mexicans and 57 percent of Peruvians felt this way, even though state terrorism has killed and “disappeared” more Latin Americans than street crime. Even in Uruguay, which has a lower homicide rate than some European nations, 36 percent of people said they would trade democracy for security.

Some have likewise suggested that Mugabe’s overthrow may be an opportunity for Zimbabwe. United Kingdom Foreign Secretary Boris Johnson even expressed hope that a “stable and successful” country will emerge from the coup.

After long periods of military rule, entire generations may have known only impunity, not rule of law. That makes democratic governance a hard thing to comprehend — or to bet on. Vanderbilt’s most recent LAPOP survey shows that support for democracy has dropped markedly across Latin America, from 69 percent in 2012 to just under 58 percent in 2017.

Zimbabwe’s own history confirms this. Mugabe and his ilk — including former Vice President Emerson Mnangagwa, who appears to have orchestrated Mugabe’s overthrow — controlled politics and society by stacking all three government branches with friends and family. They ruled the country for four decades using patronage and fear.

Many Zimbabweans therefore probably don’t see much of a difference between the egotistical, self-glorifying — and technically democratically elected — President Mugabe and the military bosses who sent tanks into Harare and stationed armed soldiers at major buildings and routes.

I would dispute that Zimbabwe’s political rupture will usher in an era of order and progress. And I think many Latin Americans would agree with me. I wish Zimbabweans luck, but based on my country’s past, I fear for their future.