Thanksgiving in a time of cholera

This holiday is one hell of a relief 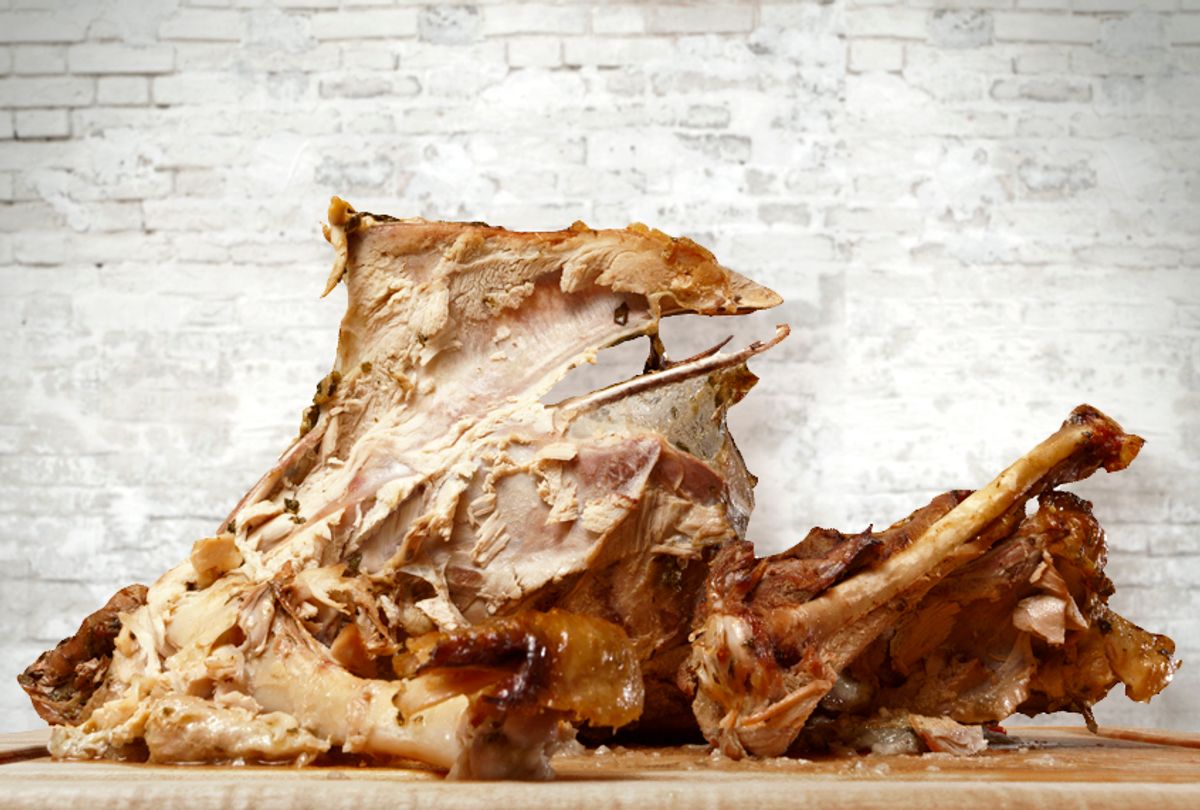 Thanksgiving this year seems to have arrived just in time to relieve us, if only for a day, from the exhaustion of Donald Trump and his incoherent tweets, Roy Moore and his slathering hunger for teenyboppers, and the gimlet-eyed Paul Ryan chirping his way through another long list of lies about the tax bill. Living in a democracy isn’t supposed to be like this. You’re supposed to be able to go to sleep at night and wake up without worrying whether a new flotilla of aircraft carriers and nuclear subs has parked itself off the coast of North Korea, without anticipating another torchlight march of Nazis in downtown Charlottesville, without having your synapses assaulted by one more auditorium packed to the rafters with red-hatted loons screaming “build that wall!” and “make America great again!”

Thanksgiving wasn’t meant to save us from a state of terminal rage and anxiety. It was supposed to be, at best, a mild pain in the ass; at worst, a wrinkle in the family firmament that would take a year to recover from before you had to grit your teeth and do it all over again. Most of us can probably recall a time in our lives when the big holidays were damned if you do, damned if you don’t occasions, dates on the calendar sitting there like time bombs waiting to go off. You might be obliged to attend a family gathering you positively dreaded. There was even a chance you had no place to go at all.

That’s the way Thanksgiving was for me when I was starting out in New York as a staff writer at the Village Voice earning a big $80 a week. That kind of income didn’t leave me enough to fly all the way across the country for the holidays, so when my first Thanksgiving rolled around, I decided I’d give a dinner of my own. I was living on an old Pennsylvania Railroad barge on the Jersey side of Hudson River that a friend and I had converted into two huge lofts. The barge could be described, charitably, as haute-hippie. The space was two-by-foured and sheet-rocked into living and sleeping areas, a kitchen and bath. We replaced huge sliding cargo doors with ten by ten French windows that looked downriver all the way to the Statue of Liberty. It was heated by a centrally located pot-belly stove that burned coal we picked up down in Jersey City in huge sacks that cost 50 cents. We would roll them on hand trucks down the dock and load them into a bin and shovel the coal into the potbelly until it glowed red — which was just enough combustion to bring the November temperature in this paradise on the water up to about 60 degrees. Sweaters and heavy socks were strongly recommended, and it helped to sit pretty close to the stove, but there was a hell of a view of Manhattan twinkling across the river.

The Village was packed with people just like me. I called us the Lost, Left Behind, No Place Else to Go Crowd – Nick, a bartender and Elizabeth, a waitress from the Lions Head; an out-of-work Wall Street trader named Tommy, and Alice, a former Playboy Playmate of the Year turned novelist and bit part player on daytime soaps. There were Village restaurants that offered Thanksgiving menus, but most of us were too broke to shell out the $9.50 most of them charged, and nobody wanted to be stuck eating alone, so when I spread the word that I was cooking Thanksgiving on the barge, it didn’t take long to fill up the guest list with the crowd from the Village and friends who lived on the Palisades in New Jersey near where the barge was docked — Howie who installed elevators in skyscrapers, Eddie who drove a milk truck and Pete who worked as a longshoreman down on the Newark waterfront. It was, as they say, an eclectic crowd.

I had helped out with Thanksgiving and Christmas meals when my father was serving overseas, and I picked up a paperback copy of "The Joy of Cooking" at Brentano's on 8th Street for 75 cents, so after a trip to the local Pathmark, I figured I was ready. My New Jersey friends dropped off a bean casserole and a dish of manicotti. I made the stuffing and put the turkey in the oven and started peeling potatoes while one of the Jersey guys made a run through the tunnel to pick up the friends from the Village. I think we set up a sheet of half-inch plywood on saw horses for a table, and one of the guys brought some folding chairs from his mom’s and we were set.

I have a dim memory of the turkey being crispy and golden but not completely done, especially the thighs, but there was plenty of stuffing and mashed potatoes and gravy, and the beans and manicotti disappeared quickly. Wine was poured in abundance. The potbelly was kept well stoked. Elizabeth and Alice brought pumpkin and apple pies, and Eddie supplied the ice cream. We were all sitting around the potbelly stove watching an occasional tug pushing barges upriver, when somebody produced a joint and passed it around. The next thing I remember is waking up. I looked around and found everyone passed out on couches and chairs, full of turkey and manicotti and some really powerful pot. It was getting on towards midnight, so I woke everyone up and we said our groggy goodbyes on the dock. I went back inside, threw some more coal into the potbelly and started to clean up. The carcass of the turkey was stripped bare, except for some raw spots around the leg joints. The mashed potatoes and stuffing were gone. All that was left of the manicotti was a smear of tomato sauce in the baking pan. Wow. My first Thanksgiving. They liked it.

I spent the rest of that winter on the barge and took off for a loft on Houston Street before the next winter set in, but I kept up the Lost, Left Behind, No Place Else to Go Thanksgiving. I gave one every year on Houston Street for the usual crowd from the Village and a couple of the New Jersey guys who used to drive over. And every year I invited Maurice, an old character from the Village with long gray hair and a long gray beard who wore overcoats, winter and summer. He used to sell 25 cent Village Voices for a dollar to tourists, and for another buck would give them a walking tour of the Village. He claimed to have marched up 5th Avenue with Eugene V. Debs and knew where all the famous writers had lived – Eugene O’Neill, Dylan Thomas – he could even take you past a 10 foot wide townhouse on Bedford Street where Peter, Paul and Mary had lived when they were first starting out.

My Thanksgivings on Houston Street were a lot like the first one on the Barge. I cooked a turkey and stuffing and gravy and mashed potatoes and sautéed Brussel sprouts with bacon, Howie always brought over manicotti from Jersey and everybody else brought wine or dessert or ready-made side dishes they picked up somewhere. I had a big table in the kitchen-dining area at the front of the loft, and out the south facing windows, we could see the towers of the World Trade Center above the roof of St. Anthony’s on Sullivan Street.

Maurice always showed up late and brought a tourist he had met on the street. He would take off his long overcoat — the only time I ever saw him without it was in my loft – and sit down to dinner and tell stories about the old days in the Village. He claimed he knew Eugene O’Neill when he was writing plays on West 10th Street and Dylan when he was walking around the Village with a guitar on his shoulder playing coffee houses. And Phil Ochs. And Fred Neil. And Odetta, the famous folk singer who influenced everyone from Joan Baez to Janis Joplin. Everyone took Maurice’s stories with what could charitably called a large measure of salt, but he was one of us, and every Thanksgiving we would indulge his stories about the old days in the Village, and after he left, some of us would poke fun at him. You can tell Maurice is getting old, someone would say. He left out the story about giving Phil Ochs the title of his song, “There But For Fortune,” and everyone would laugh.

Then one year came Thanksgiving and the usual crowd had already sat down to dinner when the doorbell rang, and somebody said, that must be Maurice. I went over to the window and threw down the keys, and after his long trudge up four flights of stairs, Maurice opened the door to the loft and ushered in his guest. "Everyone, I’d like you to meet Odetta," said Maurice. And there she was in her Afro and long, colorful caftan, with a big purse slung over one shoulder and a guitar over the other. They had just come from a Thanksgiving service at the Judson Church.

We made room for Maurice and Odetta at the table. I’d gotten better at my turkey, having learned to roast it at 425 with no stuffing so it came out with crispy skin and moist meat. Everyone dug in. After we finished off Alice’s pumpkin pie and Shifty’s bottle of port, Odetta got out her guitar and sang for us, Maurice sitting there beaming behind his gray beard with one arm around her shoulder, like, see? You didn’t believe me, but I told you straight, every time.

I got up to make a pot of coffee. I was standing at the stove, and out the window to my right, I could see the stained glass windows of St. Anthony’s, and to my left in the living room, Odetta had put down her guitar and everyone was listening to one of Maurice’s stories about the old Village. It was Thanksgiving, and the loft still smelled of roasted turkey and pumpkin pie and just a hint of pot, and I thought, this is what it’s all about, isn’t it? You cook good food, and you have good friends over, and everyone fills up on turkey and gets a little high and tells a few stories, and outside, New York keeps humming and thrumming and a fire engine screams past and the lights of the tall buildings twinkle and the windows shudder in a wind off the river and now somebody’s laughing and Maurice just mentioned marching with Eugene V. Debs again, and all is right with the world.

I hope you have as nice a Thanksgiving as I’m going to have with my friends out here in Sag Harbor. And don’t worry. We’ll be back to patrolling the perimeter of Democracy in the morning.