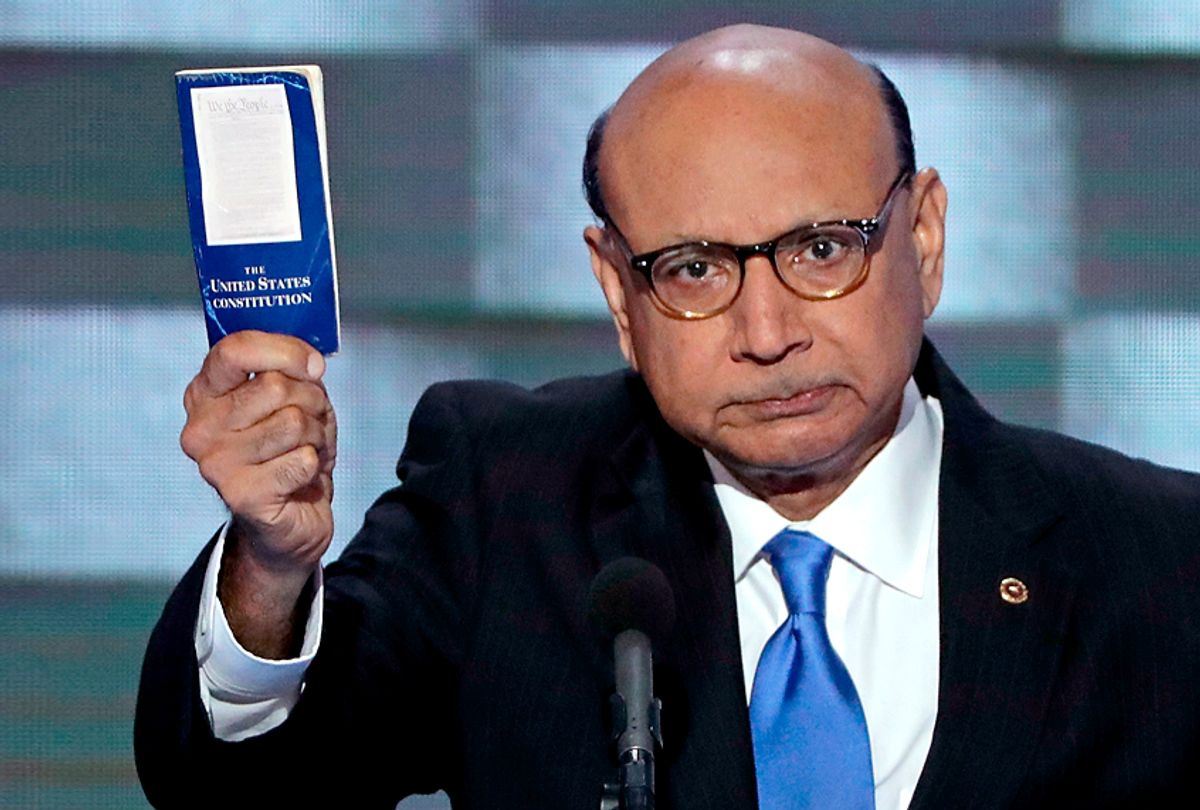 Khizr Khan, father of deceased Muslim U.S. Soldier, holds up a booklet of the US Constitution as he speaks at the Democratic National Convention. (Getty/Alex Wong)
--

Khizr Khan captured the country's attention in July 2016 when he took out his pocket-sized Constitution on the stage of the Democratic National Convention and offered to lend the copy to Donald Trump. Now the Gold Star father has written a memoir telling not only the touching story of meeting and falling in love with his wife, but that of an immigrant and lawyer in awe of the values and ideals built into America's founding documents.

"Those values have made us a beacon of hope for the rest of the world," Khan told me in an interview for "Salon Talks." Khan warns that it's "high time for all of us to read these documents, to see where we have come from" during the Trump administration, pointing to attacks made by the president on an independent media and judiciary.

To hear more about why Khan values being an American, despite Trump's rhetoric, and his experience living under martial law in Pakistan, watch the video above.

Khan acknowledged in our interview that justice and equality have not been fully realized throughout U.S. history, but his book, "An American Family: A Memoir of Hope and Sacrifice," offers an important reminder that the foundations are there; however, it's up to the people and the government to uphold them.

The Clinton campaign invited Khan and his wife Ghazala to speak at the DNC as parents of a fallen American soldier, and as a rebuke to Donald Trump's negative rhetoric toward Muslims and immigrants. Their son, Capt. Humayun Khan, was killed during the Iraq War in 2004 and posthumously awarded a Purple Heart and Bronze Star.

Following the DNC speech, Trump started a public feud with the Khan family, including an implication that Khan's wife, Ghazala, wasn't allowed by her husband to speak at the convention. Khan fired back, claiming that Trump was "devoid of feeling the pain of a mother who has sacrificed her son."

To hear more about what it was like to become the target of Trump's attacks, and what his family went through after Humayun's death, watch our full conversation.