Should I get special treatment because I stutter?

I had decided long ago to refuse accommodations for my speech impediment. Was it time to accept? 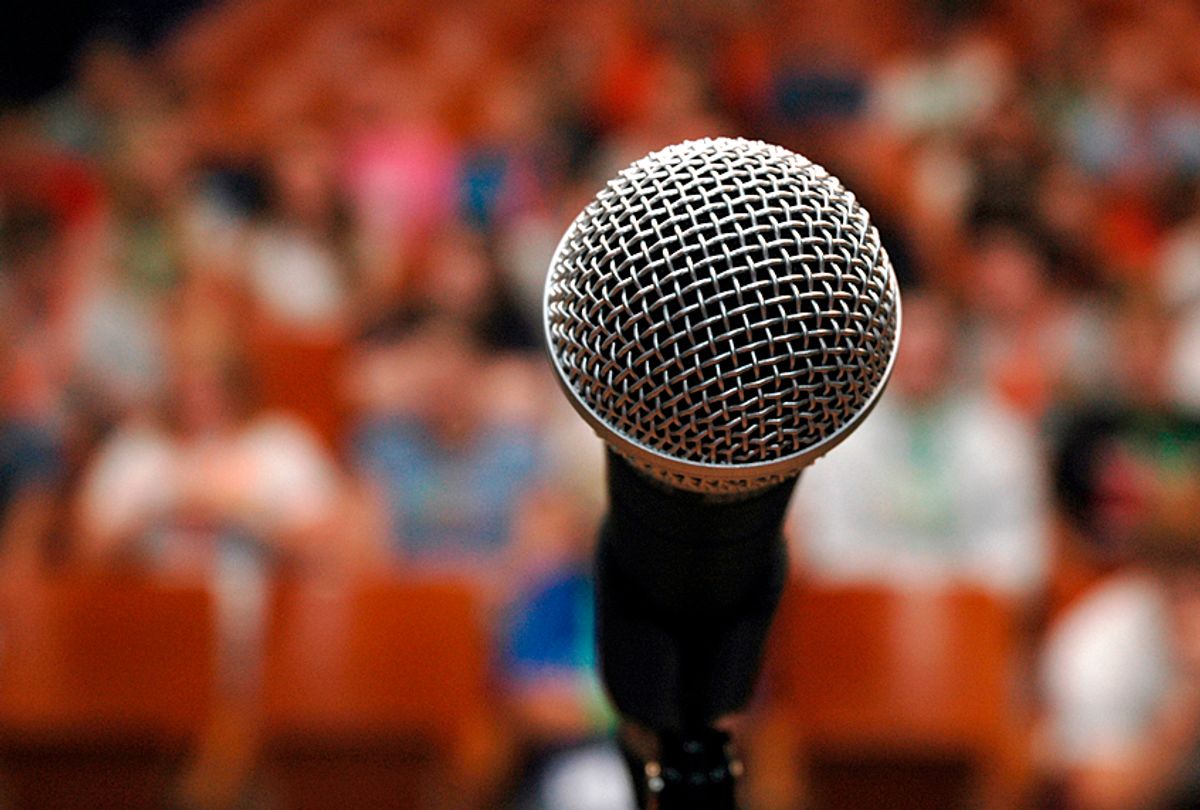 I sat on the bathroom floor, dizzy and nauseated, picturing the stage where I would give a reading the next day.

Months ago, in a more optimistic moment, I had agreed to perform in a public reading event for my graduate writing program. The reading was to take place in a local theatre where I had seen plays performed. By accepting the invitation, I was required to read my creative work while standing alone on a stage normally filled with confident, professional actors.

But I was no actor — not even close.

I scooted forward on the floor and circled the toilet, fearful I might lose my lunch. While the nausea hit, I grew worried about my heart rate. It had a wild rhythm, more frantic than my fastest pace on the treadmill. Without meaning to, I pictured the stage again: the back wall lined in dark curtains, a spotlight over the podium, and then — me. Lost in the daydream, I imagined myself standing in front of an audience, then leaning into the microphone, suddenly unable to say a word.

This might seem like an exaggerated nightmare, a scenario of embarrassment lifted from a teen movie. But the reality of my situation made my apprehension genuine: I have a speech impediment and have since childhood. I stutter.

At 24, I had already experienced at least a dozen moments of public agony: public readings I had suffered through, the strain of the stutter making my neck red with shame, along with classroom presentations that turned into 45-minute stuttering displays, content muddled by my repetitions (r-r-r-repetitions) and prolongations (pppppprolongations). Still, there was an even worse way for the stutter to manifest: the dreaded vocal block, an impenetrable wall that prevented any sound from escaping. Blocks found their way into my speech with no warning, and not only during public speaking — they could strike while I ordered at a restaurant or made a phone call, too. Blocks could last anywhere from seconds to whole minutes, during which I would cast my eyes downward and try to ignore the people I was trying to communicate with as they shuffled awkwardly, waiting for me to finally begin speaking again.

There was a knock on the bathroom door. One of my roommates entered with a sympathetic frown and a large glass of water. At first I tried blaming my upset stomach on a meal of bad tacos. But the truth eventually emerged.

My roommate leaned into the door frame. “Have you considered not going?” she suggested gently, while I took long gulps of water. “Or maybe they could accommodate you somehow . . . have someone else read for you?”

I shook my head forcefully. My roommate was well-intentioned — logical, even. But I had decided long ago to refuse these sorts of accommodations. I had spent most of my life seeking fluency, before finally accepting that my stutter was to be a lifelong condition. If there was no cure, then all I had was my dignity.

“I’ve nnnnnever asked for ssssspecial treatment before,” I said with pride.

That much was true.Though only 1 percent of the American population has a stutter, I had met others who shared in my impediment, and most accepted accommodations for their disability without a second thought. There was the woman who refused to make phone calls and completed all of her errands online; the guy who had been assigned an aid in grades K-12, a literal mouthpiece following him from class to class. I sympathized with their plight, obviously, but their stories made me feel pretty smug, too. On some level, I felt more dignified than they, because I had never asked for or received special treatment because of my stutter.

My roommate left and closed the door behind her, but her words echoed in my mind. Maybe I had approached this all wrong. I had crafted my “no assistance needed” philosophy a decade ago, forcing myself to appear in control and unbothered, even if I was feeling anxious and depressed — which I often was. I had struggled silently with my disability and insecurities without acknowledging there might be another way.

Sitting on the bathroom floor, stomach turning, heart racing, I finally allowed myself to consider the previously unthinkable. Should I receive special treatment because I stutter?

My epiphany was accompanied by a series of seemingly unconnected memories: me transporting a heavy box, helping my mom use her bad knee; walking into a courthouse and noticing the ramp entrances and Braille signs; seeing my sister post a photo of frosted sugar cookies and asking Facebook friends — are these safe for people with peanut allergies?

Accommodations were being made every day, all around me, and no one was denouncing them or implying they’re a nuisance.

At the same time, no one was applauding my stubborn belief in embracing unnecessary stress, either — especially those closest to me, who realized how distressing my speech disorder can be.

I lifted myself from the bathroom floor. I grabbed my notebook, and — like any decent graduate student — developed a list of pros and cons.

I could go to the reading and stutter mildly. That was a possibility.

I could go to the reading and stutter violently, flush deeply with shame and cry the whole drive home.

If that happens, I thought, it might take me a while to recover.

I thought unexpectedly of a close friend who loves doing laundry. I would watch in amusement as she loaded her washer with detergents and softeners, sprinkling in scented beads, then tumbling the clothes on low-heat or hanging them to dry. She folded them delicately, tucking them neatly into drawers. If she can put that much care into her laundry, I thought, shouldn’t I put that much care into myself?

The next day, I wrote an email and recused myself from the reading, explaining the situation and my newfound awareness for self-care. Instead of putting my stutter on display, I treated myself to hot tea and a good book and enjoyed the solitude. I could have asked someone to read on my behalf, and considered doing so in the future. But for a person who stutters, even social interactions with friends can be taxing. My jaw was sore from speaking all week. My temples throbbed from the strain. I needed to be nonverbal for a while and allow myself time to recharge. It was early October, and though the leaves hadn’t begun to fall, a feeling of renewed clarity hung in the air.

That was one year ago. The changes in me have been subtle. I still consider myself a poised and self-sufficient person. I don't need anyone finishing my sentences or speaking for me. I'm more than willing to self-advocate and educate others.

But now, if I'm asked to speak or read publicly, or make an important phone call, or meet a new person, and my stutter feels particularly debilitating that day, I feel justified in suggesting an alternative choice — or even just saying no.