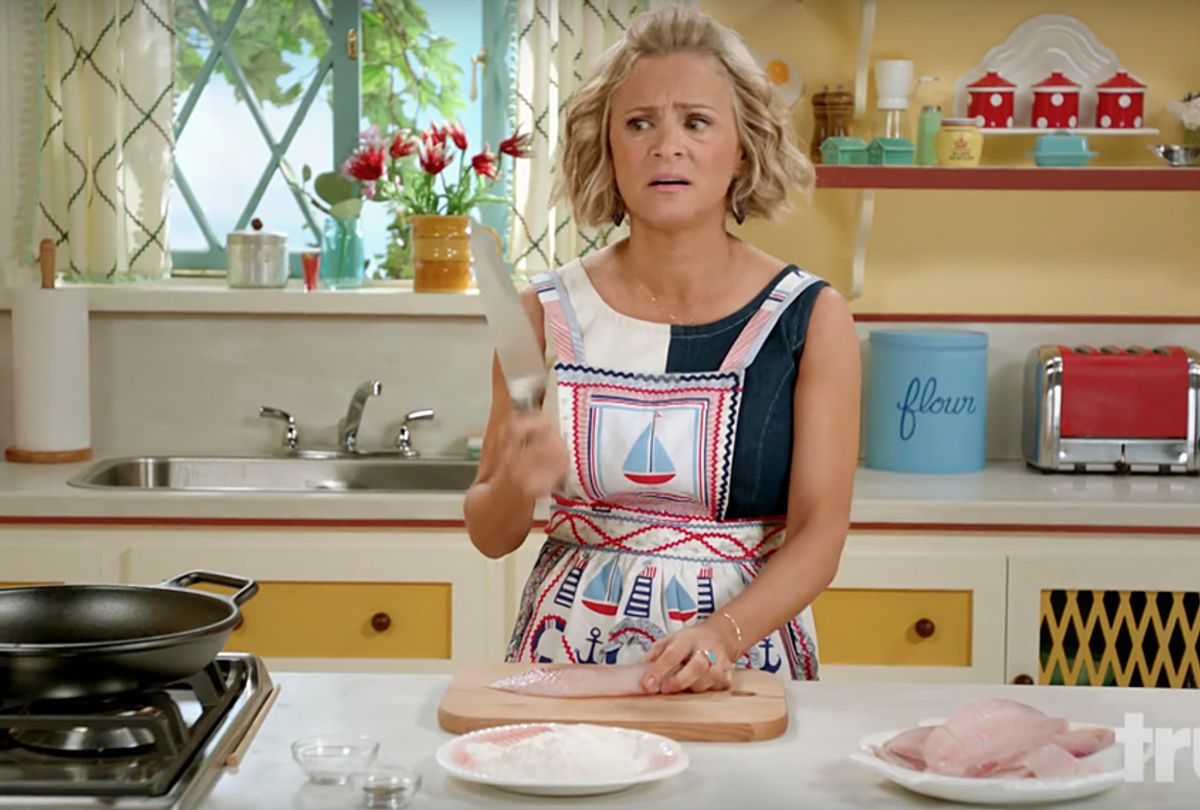 Domestic performance pressure, be it explicit or implied, is a major source of holiday exhaustion. Some of you are familiar with this aspect of the holidays: the unstated push to deck the halls and bake, sew, knit, crochet and craft; the dream, however attainable, of creating a wintry fantasy in lights and glitter, of setting the perfect table, of presenting guests with a juicy roast that is browned just so.

In the first season of the truTV series “At Home with Amy Sedaris,” Sedaris has taken a loving poke at various aspects of the domestic arts, lampooning everything from traditions surrounding grieving to frugality, nature and cooking for one. Her tips range from the utilitarian to the twisted, her calisthenics sessions are giddily raunchy, and her Craft Corner creations are simple enough for children to do -- except, that is, for the dangerous ones.

“People who really make stuff and they're good at it, they'll get a kick out of it,” Sedaris told Salon in a recent interview, “but I don't think it's going to inspire those people on Etsy to get out there and want to make their own plush toy. I think they're going to be like, ‘Yeah, maybe we should never try it. If she can't do it, I can't do it.’ Maybe my books would reach those people but I don't think a TV show does.”

As we slide into a month of unreasonable light-and-garland displays and outrageous culinary complexity as seen on HGTV or Food Network, the holiday episode of “At Home” that airs Tuesday at 10:30 p.m. — the show’s regular timeslot — offers to be a surreal and ridiculous and ever so slightly numbing antidote. Just like every installment that has come before it.

Think of the holiday episode, and every half-hour before it, as Sedaris’ gift of goofy serenity at the onset of another hectic string of weeks.

(Then consider her wise way of thinking about gift-giving: “What a perfect way to show someone you care without having to spend time with them!”)

“At Home with Amy Sedaris” is part of the increasingly rare breed of cable show that has no other purpose than to display the weirdness of its creator in full bloom. Luckily enough, people are familiar enough with Sedaris’ schtick that a show based on her bizarre imagination and memories of domestic divas of her youth — specifically, Lawrence Welk and a North Carolina show called “At Home with Peggy Mann” — found purchase on basic cable.

For anyone nursing a love-loathing relationship with the housekeeping-perfection industry, “At Home with Amy Sedaris” is a balm and welcome amusement. “It's more about the characters and their interaction and me having the show out of my home,” she explained. “It's not so much about what I'm making or cooking.”

Thank goodness, since among the items she makes are flan fit for a hobo and an angel food cake stuffed with ice cream that, as demonstrated by the fictional Amy and her handsy ex-lover, played by Nick Kroll, look like a disaster out of Martha Stewart’s nightmares.

That’s just fine by Sedaris. “I like more naïve-looking things, folk art, things that look like a 10-year-old child made it,” she said, and I gravitate towards that kind of stuff more than the perfect Martha Stewart-type-looking stuff, which takes some skill.”

Viewers who are familiar with Sedaris know her as the voice of Princess Carolyn on “BoJack Horseman,” or her supporting role in “Unbreakable Kimmy Schmidt,” or from her starring role in the cult classic “Strangers with Candy.” Before all that she was also one of David Letterman’s favorite occasional guests, someone whose zany sensibilities tickled him so much that he’d invite her on, you know, just because.

But Sedaris, like her satirist brother David, is a famous person who lives among the rest of us mere mortals out of practicality and who happens to find pleasure in the aesthetics of housekeeping as chronicled in the bizarrely color-saturated recipe tomes from her childhood in the ‘60s and ‘70s. She displayed this with gusto in her 2006 book “I Like You: Hospitality Under the Influence” and its 2010 follow-up “Simple Times: Crafts for Poor People.”

The difference between Sedaris' books and her show is that "I Like You" and "Simple Times" had real recipes and directions meant to yield crafts that are actually useful. In contrast, the only serious endeavor of "At Home with Amy Sedaris" is its humor, which the host presents with a dusting of genteel irony and dollops of nostalgic visuals.

The set is a replica of her apartment kitchen, minus working appliances and plus lots of construction-paper decor. "It's still my lifestyle and I'm still surrounded by everything that I love," Sedaris said. "This show does have a little '70s vibe to it, but that's not on purpose. It just happens to be what I like from back then -- all the avocado green and goldenrod."

Episodes stick to a theme while welcoming guest stars such as Rachel Dratch, Chris Meloni and Michael Shannon; Sedaris’ “Strangers” co-star Stephen Colbert and Kroll get to fly their freak flags as themselves or various disturbing characters.

None steals the show from its star, who plays an assortment of caricatures in addition to a version of herself. At any given point she might share the screen with herself as a hobo with a foot fetish; herself as a bombastic Southern lady named Patty Hogg who has a superiority complex; or herself as Regional Wine Lady Ronnie Vino, who drops by to share a recipe for sangria and drop off a bag of her own version made in the toilet, prison style. Ever the charming guest, Ronnie exits while singing her signature tune: “It’s Friday night! I’m gonna get drunk, I’m gonna get laid, I’m gonna be late on . . . Monday!”

Although the show’s Amy promises tips on such useful life skills as “reattaching the tips of your fingers on the cheap,” the unspoken covenant with viewers  — sane ones, anyway — is that nobody’s going to learn how to cook or craft much of anything here. A large part of the point Sedaris makes with “At Home,” besides reminding us of the normalcy of imperfection, is that most of us don’t have the time, space, or money -- or even the appliances -- to reach the standards of the Barefoot Contessa.

"I was just talking about Ina Garten, the Barefoot Contessa, as she would be like, ‘Now, we're going to juice a lemon,’ and she would pull out this big thing to juice a lemon. That's exactly why I can't relate to these shows,” Sedaris said. “Who has counter space for that? Why can't you just juice it yourself by sticking a fork in it and why do you need that big old gadget?”

In spite of this, Sedaris doesn’t intend “At Home” as pointed satire. Like the art of homekeeping itself, the show is mainly concerned with conveying a sense of comfort.

“It's just nothing, it's fluff,” she declares, going on to cite Welk’s penchant for unpredictable frivolity as a guide. “It's like all these skills have to come into play and it just makes you smile. That's what I'm hoping people will do when they watch the show. I just hope they have an ear-to-ear smile.”