Donald Trump: A "populist" who wages class war on behalf of the rich

Staggering cognitive dissonance: Trump is still seen as a man of the people, even as he wages Republican class war 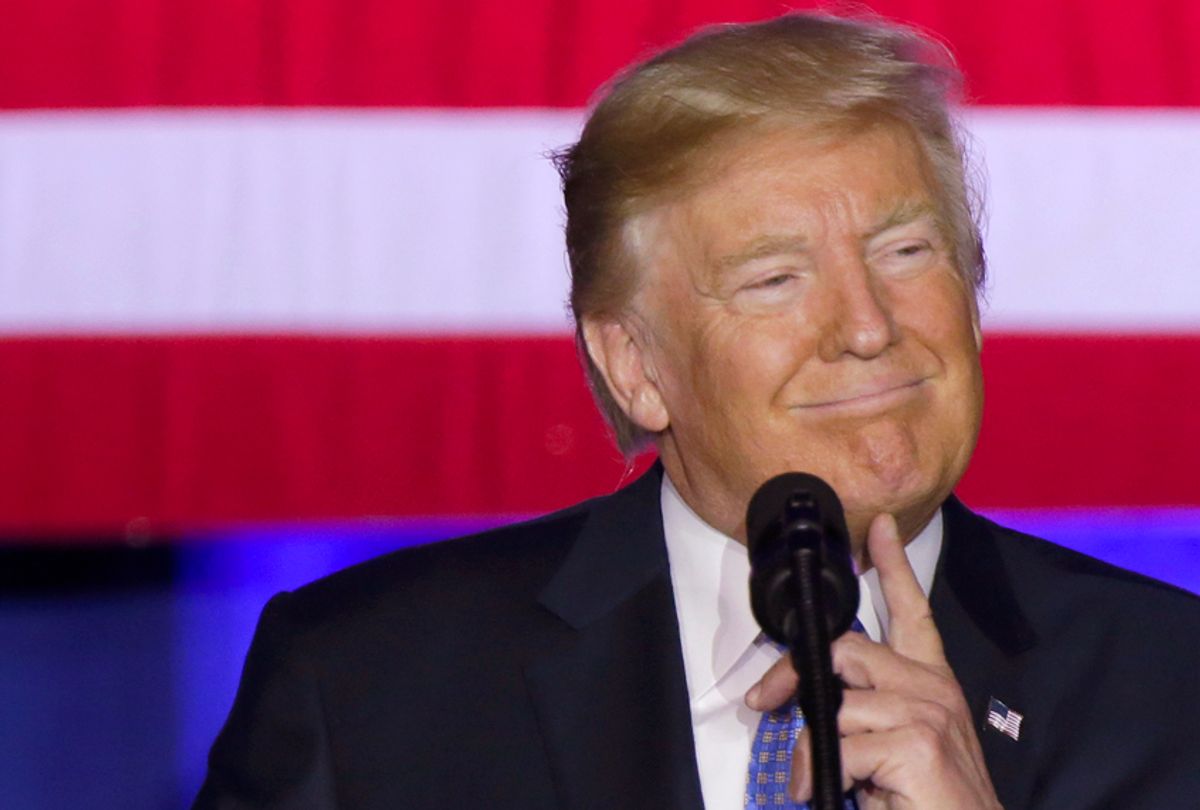 Donald Trump’s 2016 presidential campaign was widely viewed as a kind of populist revolt against the Washington establishment. As a candidate, the billionaire promised voters that he would take on the elite and fight for the “forgotten men and women” of America, and promoted himself as a man of the people.

Yet since becoming president Trump has done virtually nothing to improve the lot of ordinary Americans who work for a living. In fact, his administration’s policies have, for the most part, benefited people like President Trump — i.e., the super-rich — while hurting working class Americans. Instead of governing like a man of the people, Trump has governed like a man of the billionaire class.

The latest instance of this comes with the Republican attempt at tax reform. Last week, the House passed a widely unpopular bill that would dramatically cut taxes for corporations and the rich, while eliminating deductions that benefit middle-class people. Now Republicans in the Senate are working to pass their own legislation, which wouldn’t just slash taxes for the rich, but raise taxes on the working poor, according to an analysis by the nonpartisan congressional Joint Committee on Taxation. As some commentators have pointed out, these bills are blatant acts of class warfare, in the form of the rich waging war on everyone else.

One would think these pro-billionaire policies would discredit the president’s populist image once and for all, and prove to his supporters that he is not the “blue-collar billionaire” he presented himself as. To call Trump a man of the people is about as accurate as calling the recently deceased Charles Manson a peace-loving hippie.

Of course, things aren’t quite this simple, and the Republican tax plan reveals a great deal about Trump’s particular brand of populism. Consider some of the biggest losers from the proposed legislation (besides poor people). The House bill would absolutely devastate graduate students, whose tax burden would go up inordinately, thanks to their tuition waiver being counted as taxable income. That would make it almost impossible for students to meet their living expenses, unless they have parents nearly as wealthy as Donald Trump.

Public school teachers (and their students) would also be harmed by the legislation, as teachers in cash-strapped school districts who are forced to buy school supplies would no longer be able to write off these expenses. Predictably, middle-class people living in blue states like California and New York would also be hit hard by the Republican tax plan, which targets coastal states where “liberal elites” reside.

This targeting of highly educated people and professionals tells us a lot about right-wing populism, which is not so much an anti-elitist movement as it is an anti-intellectual one. For the right-wing populist, economic elites aren’t thought of as true elites, unless they use fancy words and have an Ivy League education to go along with their wealth. The overeducated Ph.D. student who subsists on ramen noodles and coffee, at least according to this understanding of the world, is more of an "elitist" than the wealthy businessman without a college degree, who attends church every Sunday and uses unpretentious language.

In his 2016 book, “The Populist Explosion,” veteran journalist John Judis points out that terms like “the people” and “the elite” have very different connotations depending on who is using them. “Just as there is no common ideology that defines populism,” writes Judis, “there is no constituency that comprises ‘the people.’ It can be blue-collar workers, shopkeepers, or students burdened by debt; it can be the poor or the middle class.”

“The exact referents of ‘the people’ and ‘the elite’ don’t define populism; what defines it is the conflictual relationship between the two — or in the case of rightwing populism the three,” continues Judis, who observes that right-wing populists “champion the people against an elite that they accuse of favoring a third group,” which is typically an outsider group (e.g., immigrants, foreigners, minorities, etc.).

The elites targeted by right-wing populists may not possess economic capital, but they do possess what French sociologist Pierre Bourdieu called educational and cultural capital. The “liberal elites” in academia, the media, the entertainment industry and other professional fields are society’s true elites, while the vulgar billionaire who has the vocabulary of a seven-year old and has the temperament of a pubescent teen is a man of the people. The right-wing populist’s definition of “the people” is similarly crude, and popular terms like “real Americans” distinguish the people (i.e., white Christians in flyover country) not only from the liberal elite, but from outsiders who are favored by said elite.

Not surprisingly, then, it was education level rather than income that most accurately predicted who would vote for Trump. While high-education, medium-income counties generally went to Clinton, high-income, medium-education counties voted for Trump. This explains why the president has been able to maintain his populist image while simultaneously pushing a pro-corporate agenda that clearly serves the richest one percent of Americans.

Even now, with a tax plan that transparently benefits the wealthiest members of society, Trump’s populist reputation will remain largely intact with his base — in part because many of them refuse to believe the liberal elites in the “fake news” media, who are, after all, reporting on the bill. Time will tell whether the president and his Republican allies can continue to openly wage a class war against 99 percent of the population while claiming to represent “the people.” As long as they are allowed to define who the "people” and the "elite” are, they can define what populism is too.