Reflections in the rear view mirror

When the past starts to catch up, keep moving 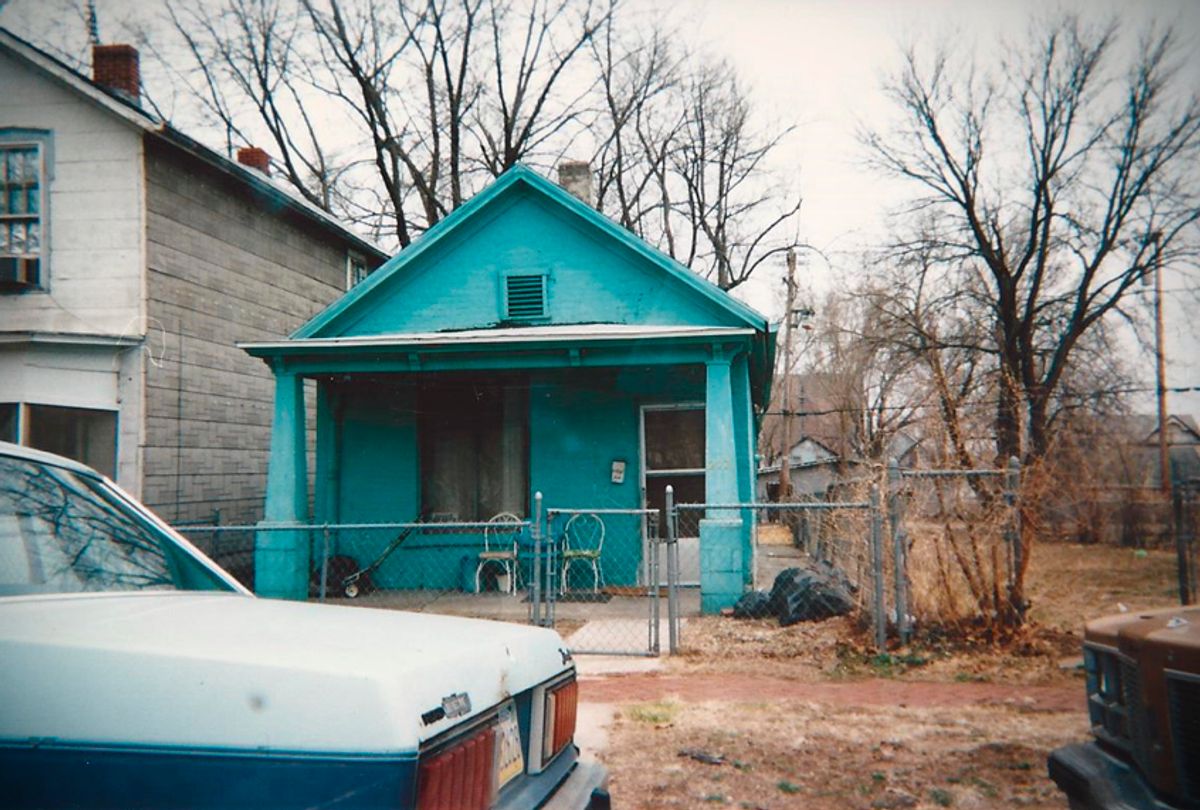 Fawn's House, found on a trip to Leavenworth in the 90's while researching a movie. (Courtesy of the author)
--

We conjure the past in the aromas of an exotic brew of memory and physical sensations.  Every time I smell cookies baking in the oven, I think of my girlfriend back when we I lived in a rented house on the western edge of Leavenworth, Kansas while my father was away in Korea. There were always cookies in the oven, and her mother used to sit in a straight-back chair next to the open kitchen door, chain-smoking and fanning herself, trying in vain to escape the heat from the stove and the humidity that rose from the Missouri River like an invisible fog. My girlfriend’s name was Fawn, and the first time I said it in the presence of my mother, she winced. I took that as a signal to conceal the minor detail that her father was a two-time loser doing eight years for interstate bank fraud in Leavenworth Federal Penitentiary, as I did the fact that she lived down on Osage Street near the river in a shotgun house with only one overhead light in each room.

I’ll never forget the night I took Fawn to the prom. At 15 in Kansas, I had a license to drive only until 9 p.m., so my mother had to drive us. We made the turn onto Osage around 14th Street, and by the time we reached 10th, she braked hopefully at the best house on each block. By the time we hit 4th Street, she gripped the wheel with white knuckles. When we pulled up in front of the shotgun on the river side of 3rd Street, my girlfriend was waiting for us in a simple, floor-length sheath of pink satin her mother had hand-sewn from a Sears and Roebuck pattern she cut on the kitchen table. Fawn was tall and wearing satin heels that matched her dress, with her hair done up in a French twist; I knew she would tower over me, but I didn’t care. Standing there on the porch of her shotgun house with hard-packed dirt for a front yard, she looked like one of those swans in a Tennessee Williams play who sweep through shabby rooms, depending on the heat and a hazy elegance to keep them afloat.

As I opened the car door, my mother reached across the seat and grabbed my wrist, her face drawn and drained of color. Listen to me, she hissed. You are not going to marry that girl!  Do you understand me?

I said something like, gee, ma, I’m only 15 and she’s just my girlfriend. She interrupted me and said she didn’t care how old I was, or how pretty she was, I wasn’t going to marry that girl! Ma, her name is Fawn, I protested.

She fixed me with a glare: Truscotts don’t marry Fawns!

Angry at her outburst and offended that she didn’t trust me — she didn’t even know me — I pulled free of her grasp and got out of the car. On the porch, Fawn took me around the waist and kissed me on the lips. She smelled of fresh baked sugar cookies and carnations from the corsage I had delivered to her that afternoon. Through the screen door, I could see Fawn’s mother in a zippered house-coat, puffing a cigarette. On the wall behind her glowed one of those neon Coors signs distributed to delis and bars. This one had a backlit photo-panel of a mountain stream, and I could hear the whirr of an electric motor turning a set of hidden plastic drums that made the water look like it was cascading over rocks. I thought the Coors sign was cool, and Fawn’s mother told me she would give it to me when her husband was released from prison and they realized their dream of moving to Colorado. Fawn told me not to listen to her, that her mother and father had been talking about going to Colorado for as long as she could remember, and she knew enough by now to realize that it was never going to happen.

I ushered Fawn into the back seat of our 1955 Plymouth station wagon, her satin dress making a soft whoosh as she slid across. She said a cheery, hello, Mrs. Truscott!

My mother grunted in reply. Clutching my hand, Fawn exuded a stream of excitement, wondering what her friends would be wearing and how they’d done their hair. I looked in the rear view mirror. Mom was holding her compact close to her face, concealing a tiny piece of Kleenex that she was using to wipe away tears. Two months later, we left Kansas for Carlisle Barracks in Pennsylvania. My heart was broken, and so was Fawn’s. I never saw her again, but the image of her on the porch of that shotgun house, the way she smelled of cookies and carnations, the hiss of my mother’s voice, the sight of her dabbing her tears in the rear view mirror — they have stayed with me to this day.

The past is a bicycle lying on its side in the middle of a grassy yard in a subdivision, a tattered net dangling from a basketball hoop, a combination lock like the one on your high school locker. The past buzzes and dings and thwacks in the flashing lights of a pinball machine and rumbles from the glass-pack mufflers on a flathead Ford. You can taste the past in an ice cold Coke straight from the bottle, in a squirt of mustard on a hotdog, in a schmear of cream cheese on a bagel. A past you never really knew can even be conjured from the whispered voices on the other side of a motel wall.

For most of us, the past is a place — the street you grew up on, your childhood bedroom, maybe the baseball diamond where you hit a little league home run, the gym where you tried out for cheerleader, the wooded lane where you had your first kiss. Places have power because we put down roots there. We are where we came from.

For me, the past isn’t where I was from, it’s places I left — the sensation of being in motion — a blur of blue sky and blacktop un-spooling in a rear view mirror, the whoosh of wind past an open car window, the hum of tires at speed, the smell of oil and gasoline and asphalt and hot steel. The laws of physics apply: objects at rest tend to stay at rest; objects in motion tend to stay in motion. We were always in motion. By the time I was 18, we had lived in 22 houses, apartments, duplexes, military barracks and one non-air-conditioned Quonset hut during a stifling hot summer in San Antonio.

I could make a list of my past: dawns and midnights, departures and arrivals. A school year that began in Kansas ended in Germany. Sports taken up in Kentucky are dropped mid-season in Georgia. Wallet photos of girlfriends from Pennsylvania are taped to the inside of Virginia high school lockers. Quartermaster cots and pillows are issued, slept on, and turned in for new ones at the next post, and the next one, and the next one. Only sheets and towels are shipped ahead, unless the assignment is overseas, when even linens and dishes and pots and pans and glassware is left behind. Gain, lose. Arrive, depart.

Travel is going somewhere and returning home. We didn’t travel. We moved. We left in Fords and Chevrolets and Plymouths and Volkswagens and we drove for days and days in open-windowed cars on two-lane highways that hugged the contours of the land from one sleepy town to another, Dad behind the wheel in sweat-stained khakis, Mom forever leaning over the seat into the back, wisps of blonde hair blowing across her face, changing a diaper, or refereeing a fight. Driving through New Mexico on a coast-to-coast trip in the early 50s, the family dog was accidentally left at a gas station, tied to a picnic bench. Wilting on scorched seat-covers in blasted desert heat, exhausted from days on the road, 100 miles passed before anyone noticed the dog was missing. My brother Frank and I begged our father to go back for him. Swearing that he would take out his .45 and shoot the dog if he so much as made a peep for the rest of the trip, he finally doubled back to pick him up. It was the only time in my life that we ever turned around and went back for anything.

I was reminded of the countless days I spent in car as I drove along a stretch of Interstate 40 east of Gallup, New Mexico some years ago. My seven-year-old daughter Lilly and I were out on I-40 alongside Route 66, on the same road going in the same direction the day we forgot the dog at the gas station. The land hadn’t changed much.

Late in the afternoon, with desert mesas of New Mexico showing off their pale reds and dusty pinks in the soft western light of the setting sun, I hit the seek button on the radio, looking for some music. Nothing but cowboys and Jesus, Lilly had observed when we passed through Arizona earlier in the day. I glanced in the rear view mirror. She was asleep under a quilt in the back seat, hugging her terry-cloth “travel bunny” she had brought with her.

It was the first time Lilly had been away from home without her mother, and that morning as we stood next to the car saying goodbye, her mother and I could see that she was fighting back tears. She went inside with her mother to use the bathroom before we left. I waited impatiently, cleaning the windshield. Finally they returned, and clutching her stuffed rabbit, Lilly bravely buckled herself into the back seat. I climbed behind the wheel and turned the key. My Volkswagen GTI rumbled to life and I slipped it into gear. Just as we started down the driveway, I heard a shout. I stopped and rolled down the window, thinking we had left something behind. “The problem with you is, you’re too good at leaving,” my wife said. She gave Lilly a final hug, and we were off.

Years earlier, one of the sergeants in my platoon at Fort Carson, a grizzled lifer with 15 years of Army service, at least a couple of which had been spent in the stockade, said the exact same thing to me. Another place, another time, but they were right. Truscotts don’t marry Fawns, and Truscotts are good at leaving. The laws of physics apply. For every action, there is an equal and opposite reaction. You move forward, and back there in the rear view mirror are the consequences. Not places, but broken promises and broken hearts and crumpled dreams, some of them your own.