Mick Mulvaney called the Consumer Financial Protection Bureau a "sad, sick" joke — he was just tapped to run it 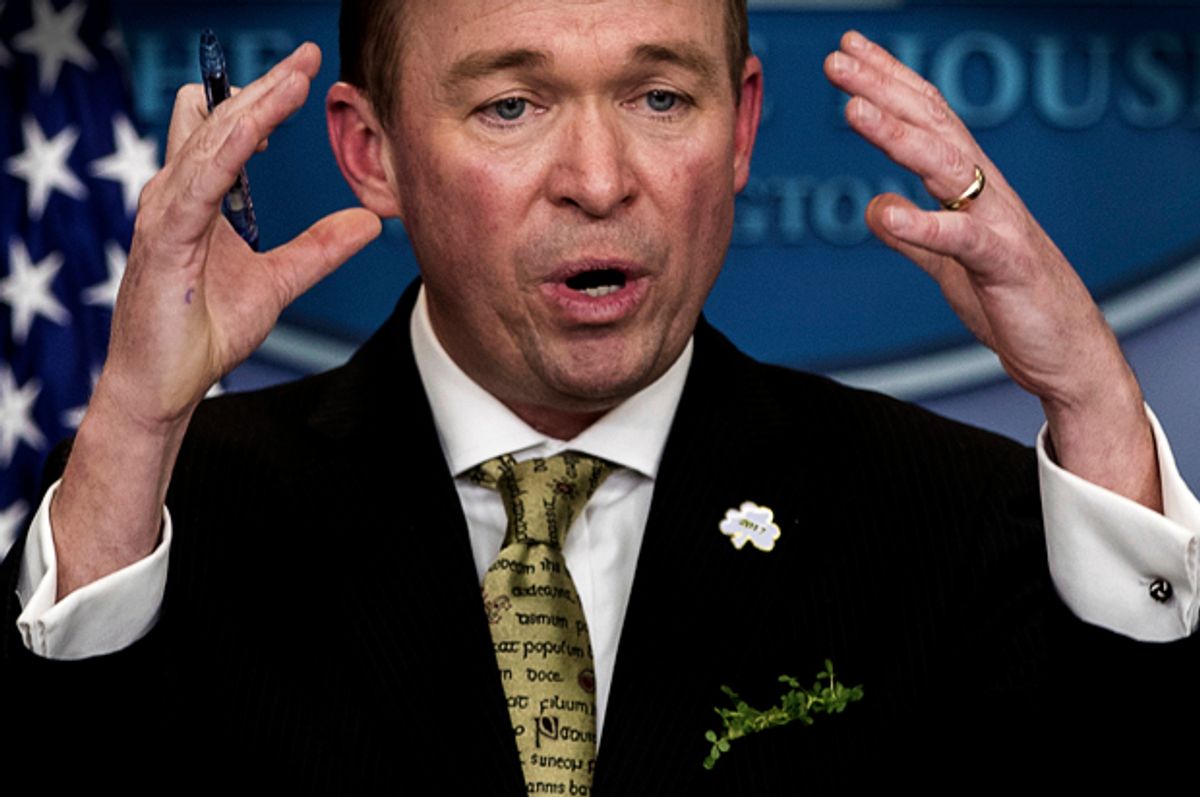 A legal dispute over who will lead the Consumer Financial Protection Bureau looms after President Donald Trump chose White House Budget Director Mick Mulvaney to be the agency's acting director, despite confusion on whether or not he has the power to do so.

Before turning in his resignation, CFPB Director Richard Cordray appointed Leandra English, the agency's chief of staff, as the deputy director, which would mean she would serve as the agency's acting director when Cordray left his post on Friday.

But confusion ensued when the White House announced on Friday, only hours after Cordray stepped down and named English as the deputy director, that Mulvaney would serve as the acting head of the agency.

"Today, the President announced that he is designating Director of the Office of Management and Budget (OMB) Mick Mulvaney as Acting Director of the Consumer Financial Protection Bureau (CFPB)," the White House's statement said. "The President looks forward to seeing Director Mulvaney take a common sense approach to leading the CFPB’s dedicated staff, an approach that will empower consumers to make their own financial decisions and facilitate investment in our communities.

The statement continued, "Director Mulvaney will serve as Acting Director until a permanent director is nominated and confirmed."

However the 2010 Dodd-Frank Act, which created the CFPB, clearly says that the agency's deputy director is to "serve as acting Director in the absence or unavailability of the Director," which would mean English is the legitimate head of the CFPB, and no Senate nomination, nor confirmation process is required, Politico reported.

In a note to his staff, Cordray said, "Upon my departure, [English] will become the acting Director pursuant to section 1011(b)(5) of the Dodd-Frank Act," Politico reported.

He addressed the issue of succession directly, and added, "In considering how to ensure an orderly succession for this independent agency, I determined that it would be best to avoid leaving this key position filled only in an acting capacity. In consultation over the past few days, I have also come to recognize that appointing the current chief of staff [English] to the deputy director position would minimize operational disruption and provide for a smooth transition given her operational expertise."

While the Dodd-Frank Act does not grant Trump the power to appoint an acting director to the CFPB, the Federal Vacancies Reform Act actually does. The law allows "allows the president to install a temporary acting head of any executive agency who has already been confirmed by the Senate to another position, like Mulvaney has as leader of the Office of Management and Budget," Politico reported.

Republicans have long made it their mission to dismantle the CFPB, which protects consumers from banks and credit card companies, citing that the agency "regulates through enforcement rather than rulemaking and that its single director has unconstitutional power," Politico reported.

In the past, Mulvaney has even said the CFPB is "a wonderful example of how a bureaucracy will function if it has no accountability to anybody," according to Politico. Mulvaney later added that the bureau was a "sick" and "sad" joke.

At the time, Cordray said the move was "a giant setback for every consumer in this country."

He added, "It robs consumers of their most effective legal tool against corporate wrongdoing. As a result, companies like Wells Fargo and Equifax remain free to break the law without fear of legal blowback from their customers."

Lawmakers such as Sen. Elizabeth Warren, D-Mass., who has championed issues such as consumer protections and battling Wall Street, condemned Trump's decision.

The Dodd-Frank Act is clear: if there is a @CFPB Director vacancy, the Deputy Director becomes Acting Director. @realDonaldTrump can’t override that. pic.twitter.com/r949ccaJAb