The art of the fake: Forgers are the art world's antiheroes

Forging art is a crime, but a crime that follows a narrative that humans find irresistible 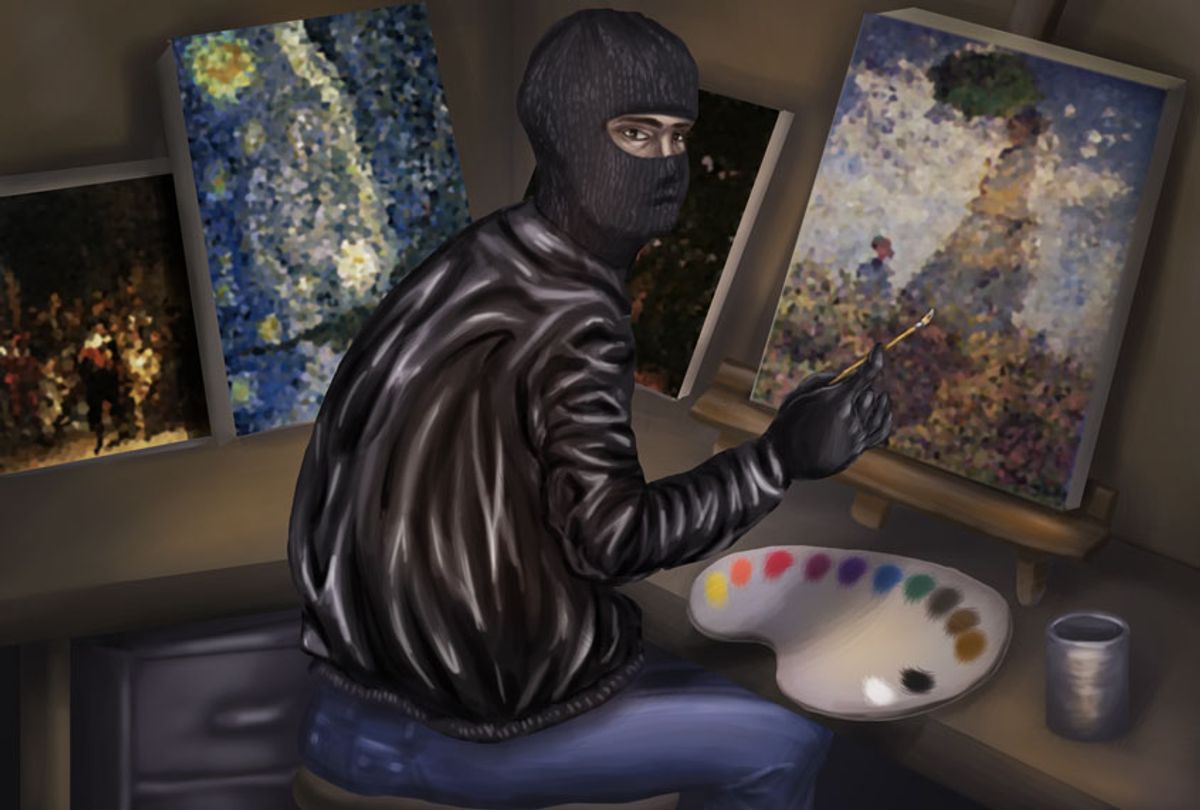 Lothar Malskat was unsatisfied with the private victory of knowing that his “medieval” frescoes were considered newly discovered masterpieces, so he took a most unusual step. He sued himself, in order to have the public, on-the-record platform of a trial in which to prove his guilt. Which no one believed, until he pointed out several intentionally inserted anachronisms in the church frescoes in question that could not possibly have been painted in the Middle Ages, including a turkey (indigenous to the Americas, there were no turkeys gobbling around 12th-century Germany) and a portrait of Marlene Dietrich. Such anachronisms were dubbed “time bombs” by cuddly criminal Tom Keating, who hid them throughout his forgeries, in order to a) make so-called experts look bad, as they couldn’t even notice such a blatant clue that the work in question was fake, and b) because he thought they might offer an escape clause if he were caught, since they should be so obvious as to make intentional fraud impossible. He was so popular, looking a bit like a department store Santa Claus, that he hosted his own TV show on how to forge — I mean, paint — like a variety of famous artists. The same goes for John Myatt, who hosts a fascinating series on Sky Arts. Eric Hebborn was so passionately in love with the process of creating his Old Master forgeries that he published not only a memoir, but also a how-to manual, "The Art Forger’s Handbook," which “outed” him as a criminal and has been found in the libraries of a great many forgers arrested since its release. He also had a bright sense of humor, for instance giving instructions on how to forge with a quill pen, which begin with “first, find an amenable bird.” He also recommends drinking heavily before forging, so as to loosen up one’s style.

I’ve spent years studying art crime and teaching about it through the organization ARCA (Association for Research into Crimes against Art), and forgery has always captivated me most. There is an element of illusionism to a good forger’s craft, but also a mischievous Loki quality to them, a sense that they are “more prankster than gangster,” and that it is okay to admire them, even cheer for them against the authorities. The tabloid media, in particular, likes to dress up art forgers as working class heroes who are “sticking it” to the elites, showing the emperors that they wear no clothes. If the supposed experts cannot tell the difference between a forgery and an original, then it does two things: The experts are shown to be foolish and overconfident, and the forger can convince himself that he is as good as the famous artist he mimics, if even experts cannot tell the difference. The pleasure in being an art forger is, therefore, a passive-aggressive showing-up of the art world. But it is necessarily a private victory (no one else knows, until you are caught or turn yourself in). The money is, in most cases, simply a bonus -- the reason forgers continue to forge, but rarely the reason they began to do so in the first place.

Forgers have a remarkably consistent origin story, present in the majority of the 120-odd cases that I researched in preparing my book, “The Art of Forgery.” Most are Caucasian males (there is not a single female forger I’ve come across) who started out hoping for a career featuring their own, original art. But this path did not work out, and they tend to describe the art world as a sort of private club to which they were not invited. This may or may not have been a fair sense of rejection — if we look at the softcore erotica, pseudo-Surrealist original works of Hitler favorite Han van Meegeren (best known for his forgeries of Vermeer), we might admire the technical ability, but the work is a far cry from what most would consider “good.”

As promoted by Giorgio Vasari in his great 16th-century book on art (which is the subject of my next book, "Collector of Lives: Giorgio Vasari and the Invention of Art"), truly great artists must have two qualities, of which a forger has only one. Invenzione is the concept behind an artwork, before the artist touches paint to canvas or chisel to stone. What will the work look like, how will it differ from other works in the genre, what is new and original and interesting about it? By contrast, disegno is the ability to physically execute whatever was conceived of in the invenzione phase. Forgers may be elite, when it comes to disegno; they may create beautiful objects (this is a subjective determination anyway), and they may have consummate skill in their art form (though not always — most forgeries I examined are surprisingly unconvincing, when looked at in retrospect, and it is the confidence trick, the story woven around them, that usually passed them off). But by definition forgers lack invenzione, because their work is derivative. They either make works inspired by the style and content of existing artists, or (more rarely) exact copies of existing works. If forgers had invenzione to match their disegno, then they would likely have succeeded as original artists, and never turned to forgery at all.

Perhaps the most famous forger of the moment is Shaun Greenhalgh, who published a memoir recently, "A Forger’s Tale," and whom I have called “the most diversely successful forger in history.” While most specialize in a single genre, medium, period or artist, Greenhalgh pulled off impressive forgeries of all manner of work, from 20th-century Barbara Hepworth sculpture to 19th-century Lowry watercolors all the way back to 7th-century BC-ish Assyrian bas-reliefs and an Amarna Period ancient Egyptian sculpture that got an enthusiastic thumbs-up from two specialists in the Amarna Period (not to mention Queen Elizabeth). Greenhalgh is, in my experience, extremely courteous and kind, even when he emailed after having looked at my book to say that I’d gotten his birthday wrong and that he objected to my lumping him into the common profile of forgers as having felt rejected by the art world and seeking revenge against it. In his account, he turned to forgery as he needed to earn money, and points to a formative tragedy, the surprising, premature death of the love of his life, as pointing him in the “wrong” direction. That’s fair enough — I wouldn’t particularly like to be “profiled,” either, and included as an example in an umbrella criminological theory.

But even looking at the case again, and with Greenhalgh’s own account on the record, my opinion has not changed, because I’ve read so many memoirs of forgers. Part of the rationalization for having turned to crime is a hard-luck origin story, but it is a very specific type of person who has the combination of artistic interest and ability, patience and attention to detail, enjoyment of the approbation of their creations (even if they do not receive direct credit), and willingness to turn to crime, although a very specific, nonviolent, minimally detrimental type of crime.

Unlike most types of art crime (theft from collections, iconoclasm and vandalism, antiquities looting), forgery is rarely if ever associated with organized crime. That means that, as a crime type, it is not part of an extended web that includes far more broadly devastating enterprises like trade in drugs or arms and even terrorism. Those damaged by art forgery tend to be collectors, wealthy individuals or institutions, or scholars, without a trickle-down effect — the damage does not normally extend more than a step beyond the victim. The crime does not fund other crime types, fuel criminal organizations, or inspire violence. There are some exceptions (Eric Hebborn was murdered, likely because of involvement with organized criminals), but the consistency of modus operandi and personal perpetrator profiles within this crime type is remarkable. At least for forgers who we know of — those who have been caught (Greenhalgh’s fatal flaw was misspelling words in cuneiform on those pseudo-Assyrian bas-relief tablets) or turned themselves in because of the desire for public recognition (see Lothar Malskat and his turkey frescoes). There are almost certainly dozens of forgers about whom we know nothing, because they’ve yet to make a mistake and are content with their private victory. Of them, and their work, which may hang in major galleries the world over, we know nothing.

We contemporary humans enjoy crime stories. Turn on the television and this becomes obvious. True crime is even more intriguing. But it usually does not feel morally acceptable to root for criminals, especially not in real life. We might cheer for Dexter as a fictional serial killer, but it would feel wrong (though we might be intrigued) to do the same for a real-life taker of real lives. We also like tales of hard-working everymen making good, and it brings a measure of satisfaction when the high are laid low, the snooty elite cut down to size, a Robin Hood effect. We like to see magicians at work, to look on with wonder and ask “How did they pull that off?”

All of these factors are present in our admiration and awe of art forgers. They represent the sort of criminals we feel OK supporting. We convince ourselves that they are not really harming anyone (and unless you are an art scholar, it is easy to look at it this way). In the vast galaxy of potential criminal enterprises, they are about as unthreatening as one can imagine. They exhibit skill and passion, and they tick all the boxes for not only someone whose exploits we admire and enjoy following, but someone for whom most folks can cheer without feeling guilty. As an art scholar, I know that there is indeed damage that forgers do, but as a criminologist as well, I recognize that the damage is largely isolated. I’d be happy to go for a beer with just about any of the gentlemen in the art forgers’ pantheon. I’d also love to own one of their creations — provided I bought it as by the forger, not as an original.