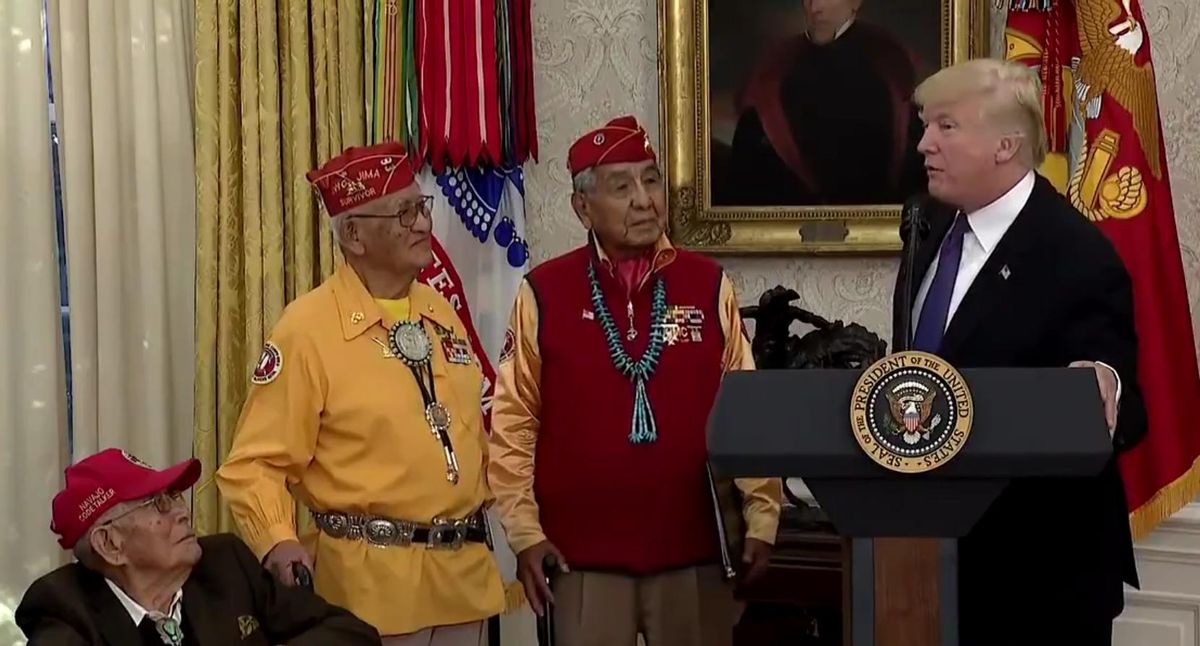 "You were here long before any of us were here," Trump said, as the wizened veterans stood before him. "Although we have a representative in Congress who they say was here a long time ago. They call her Pocahontas."

The men seemed not to get Trump's reference to allegations from Republicans that Warren had claimed to be of Native American descent to qualify for affirmative action policies. His quip did not elicit a response, according to footage of the event.

Warren is among several Democratic politicians who have been discussed as possible challengers to Trump during the 2020 presidential campaign. Politico reported in September that Warren was at the top of a list being kept by political aides working for Trump.

The president has repeatedly referred to Warren as "Pocahontas" during his short political career. Trump's supporters have thrilled to the attack, releasing a number of YouTube compilation videos glorying in his insults.

The "Pocahontas" mockery is reminiscent of the race-based attacks against former president Barack Obama over his birthplace that Trump used to build support for himself among hardcore Republican voters. The White House defended Trump's comments during Monday's press briefing.

"I think that's a ridiculous response," White House press secretary Sarah Huckabee Sanders said when she was asked about concerns that Trump's insult to Warren was racially derogatory.

"I think that Senator Warren was very offensive when she lied about something specifically to advance her career," she added. "I don't understand why no one's asking about that question and why that isn't constantly covered."

There is no known evidence that Warren received professional advantage for claiming to be of partial Native American descent. Her former colleagues at Harvard University's law school have denied that she was hired under minority recruitment policies

After Trump's statement, Warren responded with a blistering rebuke on cable TV.

"It is deeply unfortunate that the President of the United States cannot even make it through a ceremony honoring these heroes without having to throw out a racial slur," Warren told NBC News. "Donald Trump does this over and over thinking somehow he's going to shut me up with it. It hadn't worked in the past. It is not going to work in the future."

"It is deeply unfortunate that the President of the United States cannot even make it through a ceremony honoring these heroes without having to throw out a racial slur." pic.twitter.com/au1QntxDzR

In August, she was prominently featured in an ad released by Trump's campaign organization which blasted "Democrats" and "career politicians."