Amazon's "The Marvelous Mrs. Maisel" mostly lives up to its name 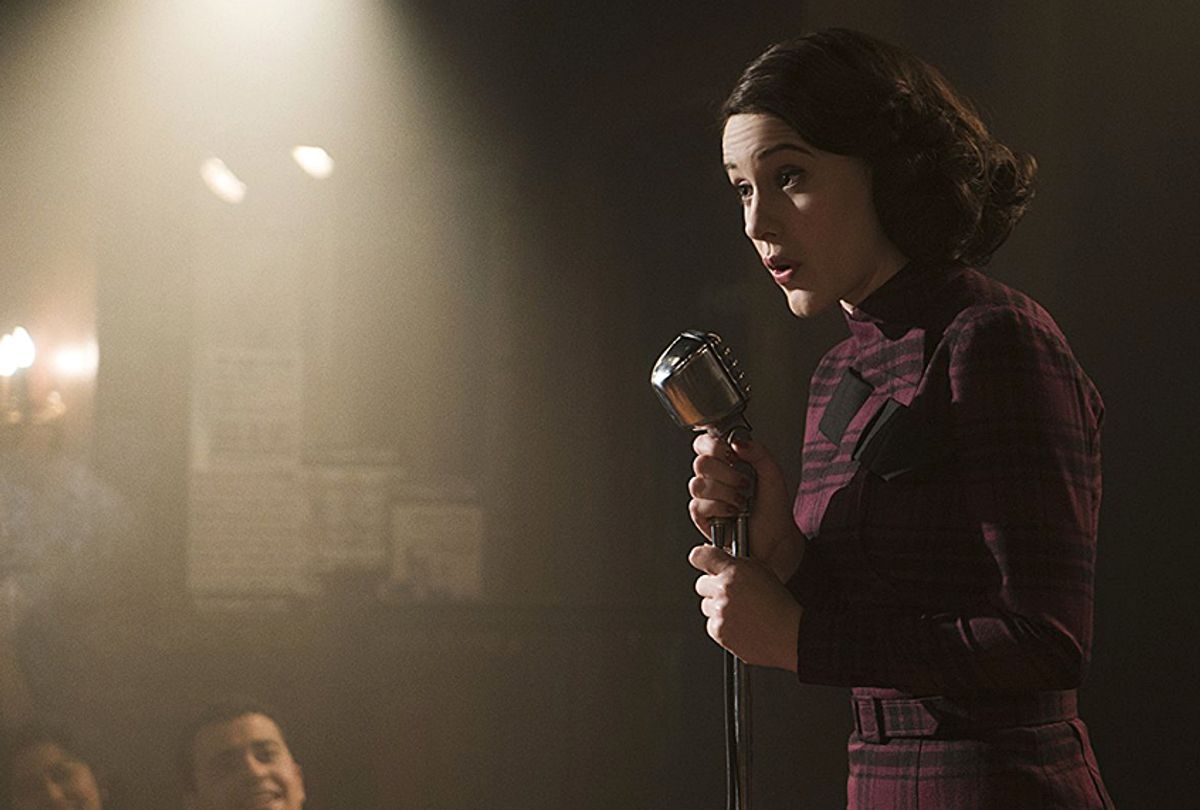 The magic of Amazon’s “The Marvelous Mrs. Maisel” rests in the confidence with which Midge Maisel owns every spontaneous word of her impromptu stand-up routines. With Amy Sherman-Palladino writing her lines and executive producer Daniel Palladino helping to map her trajectory, there’s no way that Midge’s verbiage could be anything other than crisp, precise and speedy, but even Midge herself, played by Rachel Brosnahan, seems in awe of her natural skills.

Aiding this is the fact that each spicy punchline drawn out of the painful truths about being a cinched and corseted woman in 1958 Manhattan comes from one unexpected development after another. The popular image of a 1950s housewife has her reacting to bad news by collapsing onto a couch. Midge storms out of her pristine apartment, heads to an open mic at a performer-friendly coffeehouse, and sprays her honesty and rage onto delighted anonymous audiences in the form of improvised jokes.

Her bits are peppered with profanity, her stories involve such indelicate matters as sex acts and desirability, all things elegant Upper West Side women simply do not discuss. In one scene such a woman conveys her offense to Midge in the form of a glare, and the budding comedian assures her compatriot that they are more alike than she thinks, saying that only recently “sunshine shone out of my ass.” When the lady stalks out of the room Midge yells after her, “What? I said sunshine!”

A funny thing happened on the way to our feminism, for many of us anyway: we stop believing the fantasy of a woman’s purpose as sold by religion and Madison Avenue. Prince Charming abandons the castle and announces his name is the one on the deed to Happily Ever After, and maybe we discover that all the face cream and sleeping on hard rollers in the universe won’t save us from a world of harsh reality and unreasonable expectations.

Only after we come to terms with this can we discuss the truths about our career aspirations, and “The Marvelous Mrs. Maisel” charges head-on into the space where those ideas meet. Coincidentally a number of us happen to be discussing the very obstacles Midge Maisel faces in choosing to pursue comedy, first by accident and then very much by a force named Susie Myerson (Alex Borstein), the manager of the joint where she makes her unexpected debut.

In today’s real world the case of Louis C.K.’s downfall gave rise to important discussions about the abusive environment women face in the comedy world. And they also explain why so few of them have the opportunities to become superstars. Mrs. Maisel, in contrast, presents the fantasy of a woman setting out on the road to her dreams with little in her way than the expectations placed upon her by her demanding father Abe (Tony Shalhoub), her passive mother Rose (Marin Hinkle) and an unappreciative husband (Michael Zegen). In Midge’s world a drunken rant on a mic gets her noticed by booking agents and the cops — and as a bonus, she manages to catch the eye of a young Lenny Bruce (Luke Kirby).

The eight-episode first season of “The Marvelous Mrs. Maisel” premieres Wednesday, and the good news is that within the first three episodes you will know whether you love or hate it. In many ways it represents the height of everything Sherman-Palladino’s fans adored in “Gilmore Girls,” only set in a period that fits the creator’s style. Her quickfire banter has the pleated, synthetic edge of a Golden Age-era Hollywood film, and her heroines radiate the moxie of classic divas.

Brosnahan wears Midge Maisel with a graceful, sizzling dynamism that makes watching her in action an uplifting experience even when Sherman-Palladino’s stylistic contrivances speak more loudly than the dialogue, so that’s half the battle won there. Borstein’s infectious appeal is the other fifty percent of the show’s successful central chemistry, and as much as the plot of “Mrs. Maisel” hangs in the changes in Midge’s family life and social status the relationship she shares with Susie gives the series its charm. Borstein works with an abrasiveness here “Family Guy” viewers are accustomed to in her capacity as the voice of Lois Griffin.

But in the flesh, and in a fantastic scene where uptown Midge and downtown Susie share a meal in a hot dog joint, Borstein emanates with vulnerability even as her hard expression and gravelly tone refuse to give anything away. And when Brosnahan and Borstein share the screen the actresses handle the dialogue like two expert tap dancers in a partnership that's part duet and part speed duel.

All of the performers carry Sherman-Palladino’s narrative with such skill and effortlessness, especially Shalhoub and his character’s foil (and Midge’s father-in-law) Moishe Maisel, played by Kevin Pollak. As is true of “Gilmore Girls,” the cast and character do more to charm viewers than the narrative does; the opening hours of season 1 spin around variations of the same theme. And this can get irritating in moment when Sherman-Palladino shows how much she’s in love with her heroine by, say, having her pulled out of the audience at a rally she's stumbled upon to make a flawless, rabble-rousing speech on an issue she knows little about. How is this plausible? Why because Mrs. Maisel is just that marvelous.

It helps that the tone stays snappy through it all, but it also becomes grating. Even so, “The Marvelous Mrs. Maisel” pulls off an enviable feat in making us fall in love with a story about ambition and dreams while flirting with ideas about a woman’s role in the spotlight, on stages and in history. And it does this without taking itself too seriously.

As returns to visions of bygone eras go, at least this one proves that Palladino and Sherman-Palladino and Dan are capable of more and better than merely extending “Gilmore Girls” beyond its natural lifespan. Stars Hollow is a lovely fiction, but I’m more curious to see where in the world Midge Maisel will thrill and scandalize audience next — especially if that world only extends to the borders of New York City for the time being.