What are the holidays without a racist character and all the white people that defend it? 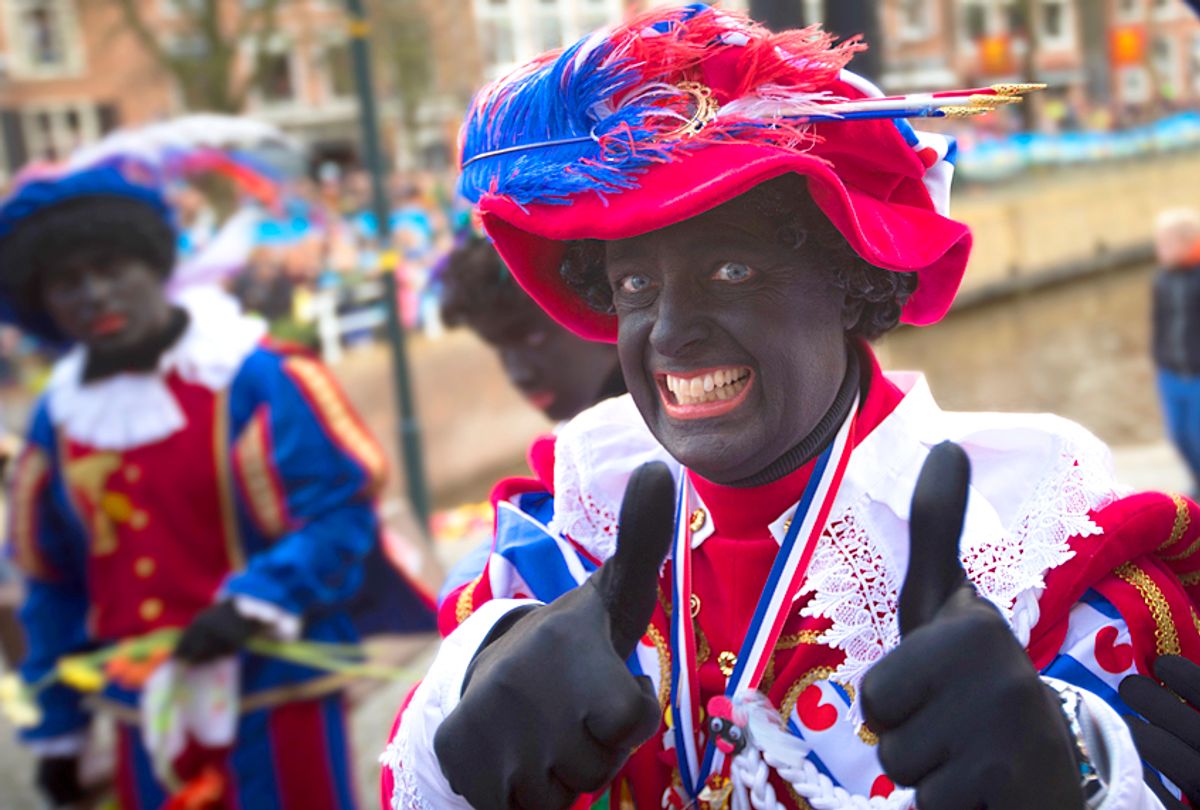 A Black Pete during the arrival of Sinterklaas in Dokkum, northern Netherlands. (AP/Peter Dejong)
--

It’s Christmas time and that means time for pine trees in living rooms, wreaths on doors, pretty lights, Santa and of course white people dressing up as his black helper and hard right demonstrators fighting to preserve his cultural presence. Or at least that’s the case in the Netherlands, where controversy over this very specific cultural character has taken on an extremist slant.

Black Pete, or Zwarte Piet, if you’re unfamiliar, is a character celebrated during Christmas time in the Netherlands. He helps Santa Claus (aka Sinterklaas) deliver gifts. Based on just that detail-free description, he seems pretty innocuous, all things considered.

During a series of public celebrations, however, white locals dress up as the "Black Moorish" character by painting their faces black and their lips red and by donning curly black wigs. Yeah. The longstanding tradition is pretty much as bad as it sounds, worse even.

The Dutch aren't the only ones to play this ugly game as Aruba, Belgium, Curaçao and Luxembourg all have their own variations on Black Pete revels. While Curaçao does not have a white majority population, the tradition there, as elsewhere, follows from a Dutch 1850 literary rendering of a folk legend that many feel is informed by European enslavement of Africans.

So terrible and so culturally entrenched is this mass minstrel show that the United Nations felt the need to get involved.  In 2015, an official report from the U.N. Committee on the Elimination of Racial Discrimination stated that “the character of Black Pete is sometimes portrayed in a manner that reflects negative stereotypes of people of African descent and is experienced by many people of African descent as a vestige of slavery." It added that the country should “actively promote the elimination” of the character and his inclusion in festivals.

While, yes, more people in the Netherlands than ever are activated against the character, he still enjoys broad enough popularity that many feel absolutely no shame in dressing up as him for the feast of St. Nicholas. Indeed, some of his defenders claim that there's no racial angle here, as they see Pete as covered in black because he's sooty after climbing through chimneys to deliver holiday gifts. His costume, however, is perfectly clean, and Santa, who also would presumably do some chimney climbing with him, is never portrayed in blackface. Also, the theory is completely contrary to the historical origin of the character.

But there's more than a slow turn against Black Pete afoot here. While events featuring revelers dressed in Black Pete garb have long been met with peaceful protest, the recent rise of an international extreme right has seen these festivals marred by greatly increased tensions.

Last week, as the Guardian reports, 35 people thought to be involved in the European extreme-right movement attempted to stop a group of 120 people protesting against an official celebration that included Black Pete in the Dutch city of Dokkum. The Dutch Internal Affairs Minister spoke out against the incident, saying, “I understand the emotions on this subject, but I cannot approve of people stopping everything on a highway,” he said. “Everyone must abide by the law, including these people.”

Later that week, about 10 people dressed as Black Pete "invaded" an Utrecht elementary school that has celebrated Santa without his sidekick since 2015. The protesters, members of an “action group for the preservation of Zwarte Piet,” handed out literature and stickers promoting the character and his traditional value. According to the Guardian, officials at the school may file charges.

If all this doesn’t sound like an escalation in the already testy cultural battle over a fictional character, on Monday a man was sentenced to community service for tweeting that those protesting Black Pete celebrations should be “put to work again as slaves,” in 2015.

Yes, at this present moment, there's a lot of jostling, a lot of posturing surrounding this increasingly contentious issue, but no actual violence. However, as we've seen elsewhere in Europe and in Charlottesville, demonstration can turn into physical mayhem quite easily, with the newly emboldened white nationalist movement gaining power and followers across the globe.

The biggest events involving Black Pete this year are mostly still to come. We should all keep our eyes on what they yield.