"Vikings": Our dark age, as seen on History

We may think we are on our way to a Wonder Woman-style age of justice, but no. Look to Kattegat, my friends 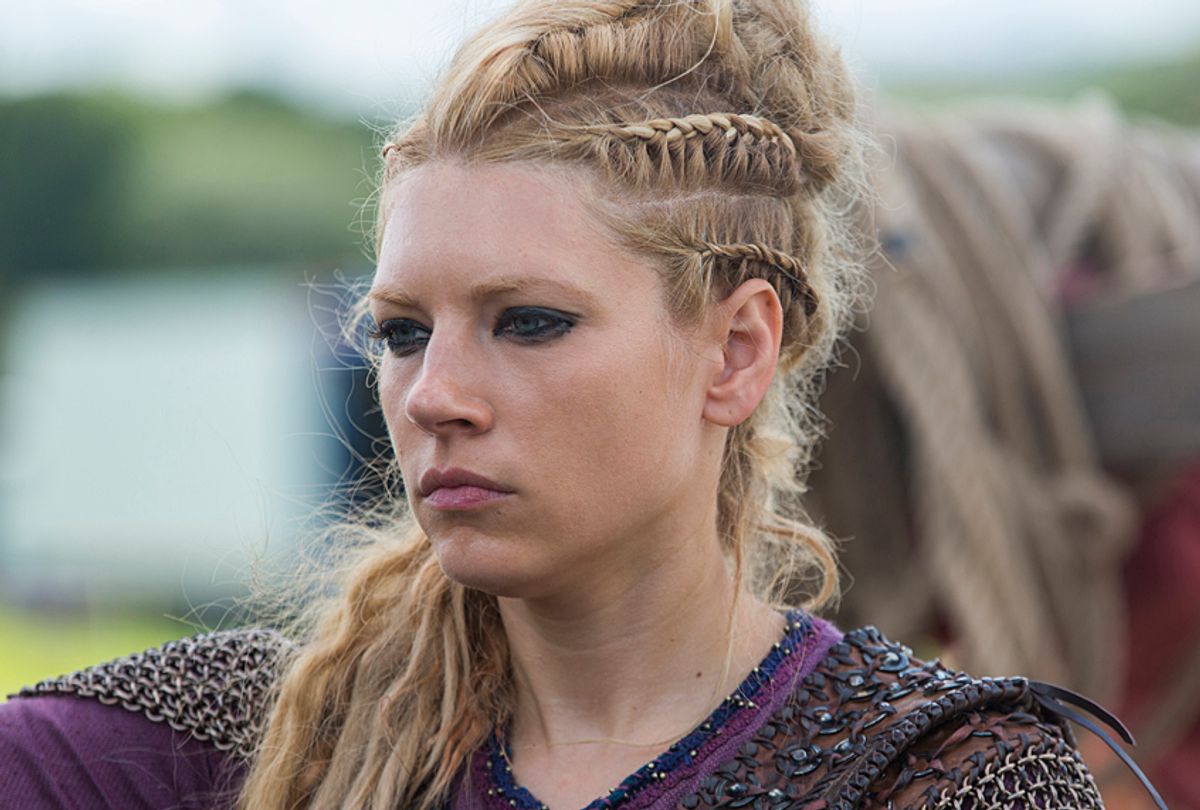 Themyscira is coming! Have you heard? Are you not seeing its approach? The evidence is all around us: strong women, finding their bravery and coming forth to take down men who have taken so much from them and all of us. Their confidence, their chances at career advancement, their hope of feeling safe and respected where they work and live.

But wait . . . is this uprising really going to be the sea change with lasting effects that some of us (at least those of us named Megyn Kelly) seem to think it will be, based on our present point of view? Not to take the wind out our sails, sisters but remember: Themyscira, inspiring though it is, is a purely fictional creation. Wonder Woman’s homeland. As depicted in this summer’s blockbuster, it looks terrific! Flawless beaches, tremendous tailors, exciting workouts, a matriarchal society based on respect and honor, sure! Who wouldn’t want to go to there?

However, those seeking more realistic entertainment with parallels to what’s going on now, one that also includes marked differences that grant vicarious thrills and catharsis, should tune in to season five of “Vikings,” debuting Wednesday at 9 p.m. on History.

What that series shows us, especially in these new episodes, is that perhaps we shouldn’t be dreaming of Themyscira but digging to defend the ground we’ve already won — just like the women are doing in Kattegat.

The central seat of the late hero Ragnar Lothbrok (Travis Fimmel, who departed in a most memorable fashion in the fourth season) is now under the rulership of his ex-wife Lagertha (Katheryn Winnick), who seized power from the former queen Aslaug (Alyssa Sutherland , also gone) by force. It was hers first, understand, and it’s not like Aslaug was doing anything useful with it or could use a blade.

Anyway, Lagertha’s in charge now, a shield maiden who dealt with sexual harassers, abusers and otherwise exploitative men in her life by stabbing them to death. Harsh, sure, but effective. In this new season, she’s put down roots in Kattegat. Her people love her. She surrounds herself with a cadre of female warriors, and she’s so relaxed in her power that she assumes a Detroit lean on the throne.

Nobody is pinching that woman’s ass, that’s for sure. But a number of men are coming for it, her rulership and her lands.

A central catalyst of the #MeToo movement is a simple one — that women are human beings deserving of equal respect and consideration at the workplace, and have the same opportunities for advancement as their male counterparts. Workplace hostility, whether of a sexual nature or just plain cruel, discriminatory behavior based on gender politics, has cost women in ways that we’re only really beginning to account for in a fundamental way.

Thus it can be instructive and satisfying to look to Kattegat and Lagertha’s story, as coarse and brutal as it can be at times.

"The present system may have been okay in the dark ages," said California Rep. Jackie Speier. "It is not appropriate for the 21st century."

But was it really OK back then? In the Christian world, sure. The women in ancient Britain suffered all kinds of indignities, which “Vikings” does not shy away from depicting. For women in the fifth season’s portrayal of the Islamic world, quality of life was a mixed bag. One in particular appears to have a sway over powerful men to such an extent that Bjorn wonders if she is the “Allwoman,” in the way that Odin is “Allfather” to the Northmen.

In Lagertha’s world, handsy shenanigans don’t fly. She dimmed her greatness in favor of Ragnar, but never let him get away with dishonoring her. She played along with a patriarchal ruler until his abusive behavior threatened to go too far; he tried to grope her publicly, she ended him on the spot and took over his earldom. Another man attempted to blackmail her; she pretended to share power with him, even agreeing to marry him, only to slice him into ribbons, walking solo down the aisle with his blood on her wedding dress.

Lagertha is shrewd and intelligent, a woman’s will personified and her rage distilled to the point of a sword. She trusts no one, fights for her place in the world, seizes power and holds it and takes her due, even if that puts a target on her back.

And she’s able to do all that precisely because she exists in the 9th century, as part of a non-Christian culture where free women farmed, trained and fought side by side with men. In “Vikings” men of honor and purpose do not ask the women in their lives to hold back.

Then again, the Scandinavia of “Vikings” is no utopia. The ruling clans murder one another with no repercussion and take slaves on their raids. And series creator Michael Hirst does not ignore the truth of human nature; a terrible assault is suffered by a major character, a warrior, in an upcoming episode.

Lagertha’s saga is one of several major plot engines in the wider-ranging and ambitious fifth season of “Vikings,” the first that fully departs from what Hirst steadily built over the past four. It’s to Hirst’s great credit that the fictionalized historic drama still feels as vital and exciting without Fimmel and other members of the cast as it did with its starting line-up, and that’s in no small part due to the show’s willingness to expand the world of these raiders and explorers, and their motivations, beyond the shows initial ambitions.

Concurrently season 5’s plot deals with the long shadows cast by the dead or deposed leaders who shifted the trajectories of their people, whether in the divided and weakened Saxon England where its new rulership, and a fiery warrior bishop named Heahmund (Jonathan Rhys Meyers) have transformed the stakes from the survival of their people to a war pitting Christianity against pagans and heathens.

Hirst’s contemplative view and portrayal of religion is unique among television series, and “Vikings” fascinates because of its insistent refusal to cast neither Christians nor worshipers of the Norse pantheon as heroes or villains or portray one way as superior to another. Indeed, Ragnar saw the merits and flaws in both and forged a lasting fraternal bond with a Christian monk he first captured and enslaved, and then freed and embraced as a member of his family.

In these new hours, however, religion takes a backseat to philosophy and legacy. With Ragnar gone, his sons are left to decide which part of their father’s legacy to honor.  This creates a political schism that, again, may seem familiar.

Lagertha and Ragnar’s son Bjorn Ironside (Alexander Ludwig) takes up his father’s legacy of exploration, allowing the series to venture more deeply into the Islamic world and expanding Viking influence. Political power, on the other hand, rests with Ragnar and Aslaug’s son Ivar the Boneless (Alex Høgh Andersen) and the Great Heathen Army he raises with his surviving brothers Ubbe (Jordan Patrick Smith) and Hvitserk (Marco Ilsø).

Textbook accounts of Ivar, such as they are, recall him as a great military strategist. A major reason Andersen’s portrayal of Ivar on “Vikings” has made him a fan favorite is because although he lacks the use of his legs, he’s cunning, cruel, ruthless and a little insane. He despises being insulted and is obsessed with achieving a level of fame and a reputation that eclipses that of his father.

In Hirst’s view Vikings follow strength, even if that strength is demonstrably psychologically imbalanced and thin-skinned. He’s also obsessed with exacting revenge upon Lagertha, which eventually pits him against his own family. It also makes him a handy ally for the ambitious Harald (Peter Franzén), who unsuccessfully schemed to dethrone Lagertha and sees her rulership as weak. (He also plotted against Ragnar, so fair is fair.)

So yes — the new age does seem a little closer to the worst of the Dark Ages and still far, far away from the fantasy island of Wonder Woman’s birth. Justice appears to be moving swiftly for women right now. Maybe the tide will turn in the short run.

As for the long view, settle in. Look to the lessons learned, and still being learned in thrilling, shocking ways by Lagertha and her fellow women warriors on “Vikings.” Look to Kattegat, where victories are as sweet as they are bitter, and the battle for respect never truly ends.