Democrats are getting tough on John Conyers. Is Al Franken next?

After too many days of hesitation and gutless dodges, Nancy Pelosi finally calls on a Democratic titan to resign 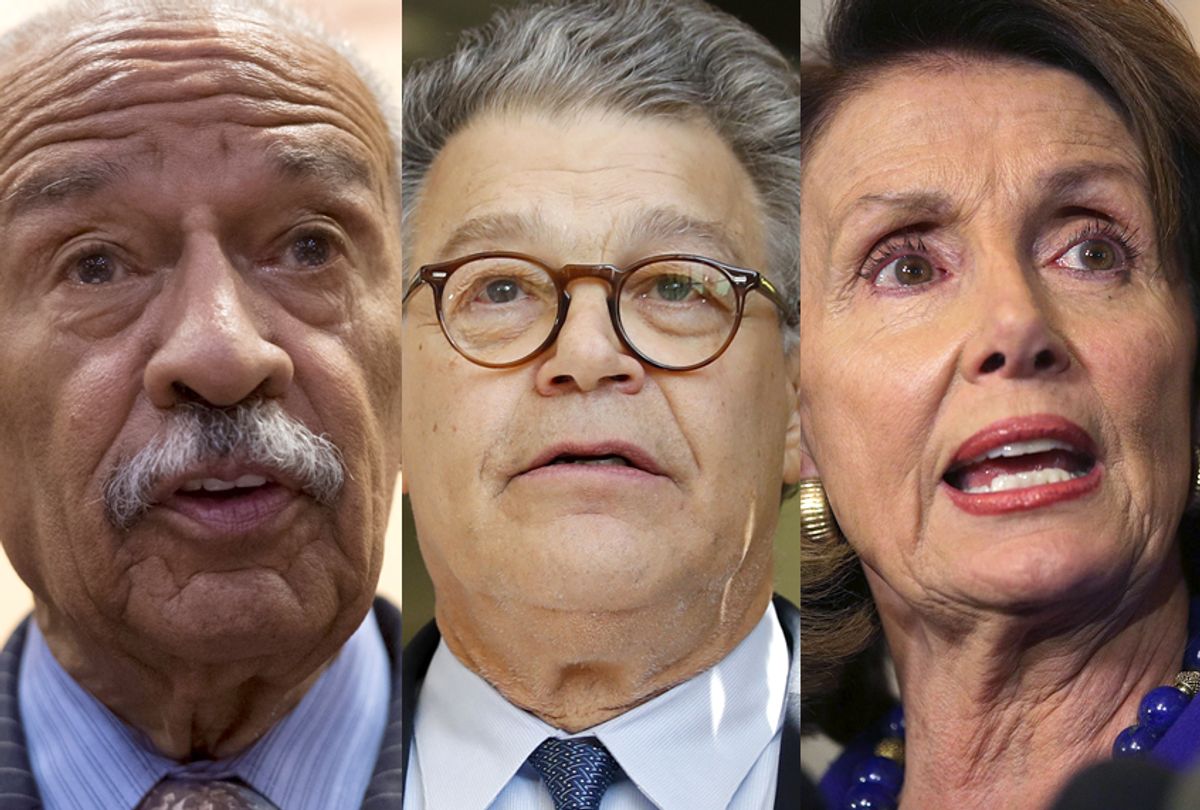 Pressure on embattled Congressman John Conyers to step down is mounting from his Democratic colleagues, including, most notably, members of the Congressional Black Caucus (CBC) he helped to establish.

A towering figure in the Democratic Party for decades, the Michigan Democrat has suddenly become an albatross dragging down a party desperate to distinguish itself as a safe space for women. After days of dithering defenses that risked ruining any semblance of a moral high ground on sexual harassment, House Democratic leaders finally called on Conyers to resign on Thursday — just as the 88-year-old was reportedly admitted into a Detroit-area hospital for “stress-related” complications.

"I pray for Congressman Conyers. However, Congressman Conyers should resign,” House Minority Leader Nancy Pelosi, D-Calif., said at a Thursday news conference. Standing alongside the third-ranking member in the House and longtime member of the CBC, Rep. Jim Clyburn of South Carolina, Pelosi said that Conyers “has served our Congress for more than five decades and shaped some of the most consequential legislation of the last half century. However, zero tolerance means consequences for everyone, no matter how great the legacy, it’s not license to harass or discriminate."

It’s been slow going for Pelosi, the first woman to serve as the speaker of the House, to arrive at such a conclusion following the floodgate of allegations of sexual impropriety that have rocked Capitol Hill as of late.

“John Conyers is an icon in our country,” she noted when pressed by “Meet the Press” host Chuck Todd on Sunday. Hours later, Conyers, who faces multiple accusations of sexual misconduct and a House Ethics Committee probe, stepped down from his post as ranking member of the House Judiciary Committee after acknowledging that he settled a wrongful dismissal complaint in 2015.

Conyers denied the allegations, and his attorney rejected calls for the congressman to step down on Thursday, challenging Pelosi’s decision to call for the resignation of Conyers, but not of Sen. Al Franken, D-Minn.

"What is the discernible difference between Al Franken and John Conyers?" attorney Arnold Reed asked at his own press conference shortly after Pelosi’s. "They’re not going to determine whether Congressman Conyers resigns . . . He will determine that when and if he makes that decision."

A fifth woman came forward on Wednesday to accuse Franken of groping her during a USO photo opportunity during the Iraq War in 2003.

"When he put his arm around me, he groped my right breast. He kept his hand all the way over on my breast," Army veteran Stephanie Kemplin told CNN.

Franken has apologized for sexual impropriety but has refused to resign.

Democratic Rep. Kathleen Rice walked out of her party’s conference meeting on Wednesday and straight to the cable news cameras gathered in the Capitol halls to call for the resignation of both of her Democratic colleagues.

At the time, several Democrats, including prominent members of the CBC, were still defending Conyers, but that quickly changed. “There is a feeling among some of our members that we need to protect his legacy,” one CBC aide told CNN.

Democrats claim to be the party of gender equality, and conservatives are already giddy about the damage such apparent hypocrisy is causing the party.

"Thanks to Conyers, Identity politics finally is splitting the Democrats," a headline at the right-wing American Thinker read on Thursday.

Democrats have been slow to learn, but seem to have finally understood what The Atlantic’s David Graham so succinctly noted: “One generation’s pioneers often end up as the next generation’s impediments to progress.”

So what are they waiting for with Franken?