Investors have begun to sour on Uber’s prospects — but wait, look at that shiny flying thing over there! 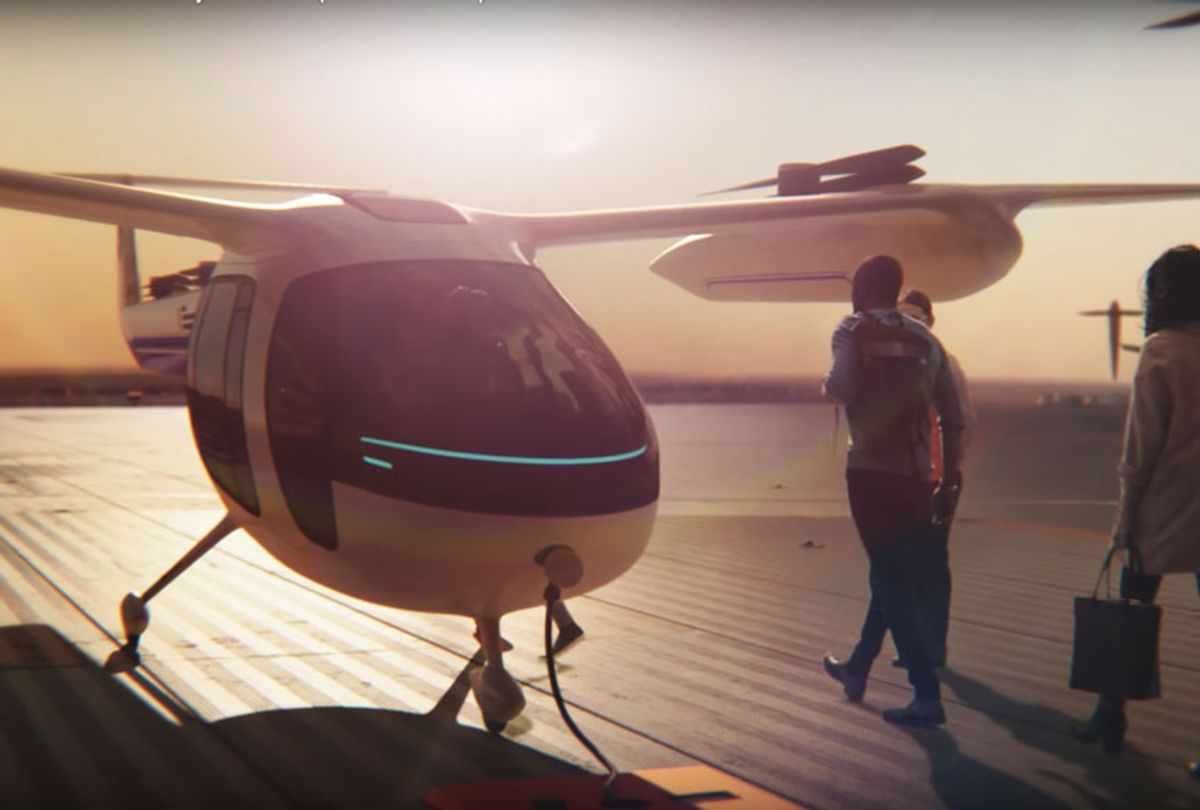 The Jetsons are here, the Jetsons are here – well, almost. Uber, the massively popular yet unprofitable ridesharing company, recently announced, with great fanfare, that it's on the verge of producing – drumroll please – FLYING cars.

Yes, you read that correctly. They are calling it Uber Elevate, and allegedly it’s coming faster than the director’s cut of "Blade Runner 2049."

In fact, Uber’s head of product Jeff Holden says flying cars are only three years away. Holden announced that the company will be piloting an aerial taxi service in Los Angeles by 2020, as well as in Dallas-Fort Worth and Dubai.

The company’s big rollout included a slickly produced promotional video showing a young, attractive businesswoman heading home to her husband and children, looking down at all of the traffic congestion below and the poor schmucks stuck in it (much of it caused by the proliferation of Uber vehicles, but that’s another story) to arrive home lickety-split to hug her children. The rollout garnered major media attention, breathlessly reported by the usual pro-tech sources.

Personally, I could not keep from laughing. Americans tend to be hyper-optimistic about technology, and I enjoy a few techno-trinkets and baubles myself. But here’s what’s wrong with this picture.

First, this company is in serious financial trouble. While Uber’s valuation has zoomed to around $70 billion — greater than Ford, GM or Tesla — the company has been losing money at a faster rate than any technology company ever. It lost nearly $3 billion in the U.S. in 2016 (plus another billion or two in China), and it is on track to surpass those losses this year, having already lost nearly $3 billion through the first three quarters of 2017.

How bad are Uber’s financials? Recently some Silicon Valley investors, such as Roger McNamee, have said that Uber is actually worth far less than $70 billion. Yet the company counters critics by claiming it has about $6.6 billion in cash on hand. That sounds like a lot of money, until you realize that, at its current cash burn rate, it will be out of business in about two years. So Uber's relatively new CEO, Dara Khosrowshahi, who replaced the scandal-plagued founder Travis Kalanick, has to figure out how to raise a lot more venture capital to keep this leaky barge afloat.

Enter SoftBank, a ginormous Japanese venture capital conglomerate, to take advantage of Uber’s desperation. SoftBank has offered to purchase a giant stake in Uber, but only at a 30% discount on the $70 billion it’s supposedly worth. SoftBank is offering to buy out original investors and early employees at this discounted price, many who have been waiting in vain for an IPO and now are getting nervous as they watch so many rats jump from the leaky ship. The worried Khosrowshahi has encouraged his board to accept this offer, yet SoftBank continues to play hardball, saying it might withdraw its offer and invest instead in Lyft, Uber’s ridesharing competitor. With a company this vulnerable, why not shake it down for an even better deal?

Uber has tried to project a rosier picture, announcing that gross bookings (a measure of demand for its ride services) rose 11 percent to $9.7 billion in the third quarter, and that net revenue grew 21 percent. But even if we can believe the numbers of a desperate company – in the past, Uber has repeatedly played fast and loose with the facts – those numbers shouldn’t encourage any potential investors. That’s because Uber’s business model is so upside-down that the more customers it has, the more money it loses. Here’s why.

Uber has become stuck in a trap, using its venture capital funding to subsidize at least 50 percent of every ride to cut fares and try to gain a monopoly position that can drive the competition out of business. Uber has never figured out a way to introduce any new efficiencies that would allow this company to provide taxi service at lower fares and still earn a profit. Amazon, for example, was able to bring an efficiency to retail by getting rid of brick and mortar stores and sales clerks across the country through selling online. That allowed Amazon to leverage those savings to sell its products cheaper than the competition, yet still eventually reach profitability. What efficiency does Uber bring to the taxi industry? None significant enough to fundamentally disrupt the market realities of this industry. The ultimate irony: Uber is charging too little for each passenger ride, so the more customers use Uber, the greater is its operating deficit.

This is the company that is going to produce flying taxis? Seriously? Uber has tried to add a gloss of respectability to this P.T. Barnum-esque bait-and-switch by announcing, again with great fanfare, that it is “partnering” with NASA to figure out a brand-new air traffic management for flying cars. All those flying taxis will need a way to avoid airborne collisions, so this part of the nation’s infrastructure would need to be dramatically redesigned.

I called NASA to ask about the extent of this partnership. All the spokeswoman would confirm is that NASA has entered into a Space Act Agreement with Uber, and directed me to a list on the NASA website of such agreements. That list includes an estimate of the dollar value of this agreement — a whopping $376,000. That’s peanuts, practically a rounding error for a government agency as large as NASA — or a company like Uber valued at tens of billions of dollars — and certainly not enough to overhaul air traffic management.

I don’t mean to be so hard on Uber, but this company brings it upon itself with its frequent overhyped “Moonshots to Nowhere,” as I like to call them. Its brash experiments with self-driving cars are stalled, bogged down by lawsuits over technology theft. Even the autonomous technology itself, while impressive, is still unproven and will take many years to mature. Silicon Valley is full of companies like this. The dirty little secret of Silicon Valley is that seven out of 10 start-ups fail because they never become profitable. Uber is on track to becoming one of them because, like all the others, it has failed to produce a product or service at a price point that allows it to beat the competition and also reach profitability.

The other enormous obstacle to Uber’s dream is perhaps the greatest of all — the company currently does not have a working model of a flying car to show anyone, not even a prototype. All they have is their fancy video with its CGI spaceship, like something ripped out of a James Cameron movie. In other words, vaporware.

But Uber isn’t the only company trying to hyper-spin its way to a transportation revolution of flying cars. Several other companies at least have working prototypes. Sebastian Thrun, one of the original pioneers behind Google’s autonomous car project, is now CEO of Kitty Hawk, a Larry Page–funded company that promises to bring flying cars to the world — not by 2020 but by this February. Hey, why not advance-order one as a Christmas present for your spouse?

The Flyer, as Thrun calls it, is essentially a giant drone with a human plunked in the middle of it, and no wheels. Online promotional videos show this machine hovering — very loudly — 10 to 15 feet above the water and maneuvering like a giant flying insect. Company literature says the vehicle weighs around 220 pounds (100 kilograms) and can hit speeds of up to 25 miles per hour (40 kilometers per hour). Watching it online is truly an impressive display – until you contemplate the notion of thousands of humans ripping through the skies on these clunky units, like the flying monkeys in "The Wizard of Oz."

Undoubtedly the design will get better over time, and Thrun says his flying vehicles will be the next “Next Big Thing,” supplanting even autonomous automobiles and trucks. “The vision of the company is that … there’s no reason why we should be stuck in traffic anymore when we can fly,” he says. “The air is so free of stuff and is so unused compared to the ground.”

Besides coming up with a machine that is safe for mass transportation use, Thrun’s biggest obstacle is government regulations. Or, rather, the lack of them. Local, state and federal regulators will need to coordinate management of any types of flying vehicles, which is bound to involve a very complicated, lengthy process. Thrun envisions people transported through the air as ubiquitously as they are now across the ground. Yet even he admits that “the equivalent of a fender-bender in the air is likely death.” The Federal Aviation Administration already has put the brakes on the usage of small drones, and it will no doubt be even more cautious when it comes to heavier flying vehicles that are transporting human beings.

But Thrun has a simple response to those regulatory hurdles – he says his machines are already “safe, tested and legal to operate in the US,” requiring no pilot license or certification, as long as they are flown in uncongested areas. But wait a minute; in California, you need a valid driver’s license, registration and insurance to drive a golf cart on city streets. According to Thrun, his flying pods are, well, above those old laws. In true Silicon Valley “disruptor” fashion, he seems prepared to ignore common sense safety precautions. And who knows, perhaps the Trump administration will say, “let’s roll the dice” on this unproven technology — just as it has loosened Obama administration regulations on self-driving cars. Laissez-faire, über alles.

I’m not a Luddite, and I admit that my crystal ball doesn’t have infinite vision; who knows, maybe one day we will have flying cars, and self-driving vehicles, too. One company that has a credible-looking prototype is called Lilium Aviation, based in Munich, Germany. It has flown a very impressive two-seat electric pod (see video in this link) that has VTOL (vertical takeoff and landing, like a helicopter) but then shuttles along smoothly, like a jet. It has raised a modest $90 million to fund the next phase of development, and estimates that it will provide on-demand air transport for passengers by 2025. Like its competitors, that’s probably a bit of overestimated hype, but at least both Lilium’s product and its hype doesn't appear to have both feet planted firmly in the air, like its competitors.

It’s bound to be a slow race to see which company, and which type of technology, might eventually succeed. But one thing seems clear: the winner will not be Uber. Indeed, Uber may not even be around in another few years. The company’s biggest challenge right now is survival; talk of anything else is just a distraction, meant to reinforce its global reputation as a cutting edge technology company and lure investors with vaporware like its flying car. But there’s nothing cutting-edge about overhyping your product and under-delivering your service.