In an administration characterized by pettiness, Trump is determined to further humiliate Mitt Romney 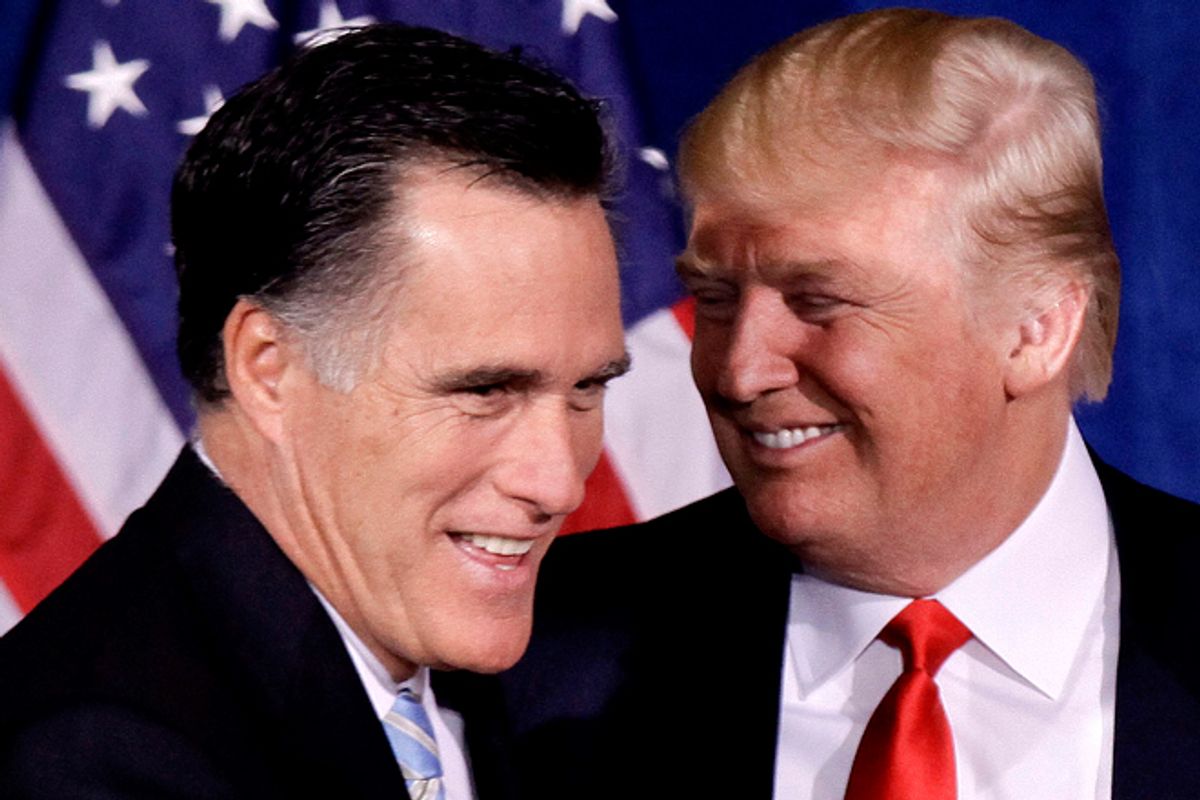 So much for draining the swamp.

Donald Trump wants Orrin Hatch, the longest-serving senator in U.S. history, to run for reelection — reportedly because he hates Mitt Romney so much.

In Salt Lake City on Monday, President Trump said he hopes 83-year-old Sen. Orrin Hatch, who's represented Utah in the U.S. Senate since January 1977, “will continue to serve your state and your country in the Senate for a very long time to come.” Hatch has publicly said multiple times that if dedicated Trump foe Mitt Romney would agree to run for the Senate, he would finally retire.  A recent Utah poll found that the failed GOP presidential candidate and former Massachusetts governor would win an election over Democrat Jenny Wilson in next year's U.S. Senate race with more than 70 percent of the vote if the election were held today.

Hatch has called his designated successor his “perfect” replacement in the heavily Mormon state. But speaking at the Utah State Capitol on Monday, the president made sure to shower Hatch with effusive praise in an explicit effort to pressure him into staying in Congress.

“You are a true fighter, Orrin, I have to say,” Trump said of the seven-term senator, noting he did “tremendous” work ushering tax reform through the Senate. Hatch traveled to Utah with the president on Air Force One and organized a meeting with leaders of The Church of Jesus Christ of Latter-day Saints for Trump.

President Trump touring the Bishop’s Storehouse and he made comments about @senorrinhatch and Mitt Romney. Here’s the video. @fox13 #utpol pic.twitter.com/ZlC3EUN5Qc

Politico reports that Trump has waged an (until today) behind-the-scenes campaign to keep Romney, the most prominent NeverTrump Republican, out of the Senate, where he could potentially join the likes of other GOP Trump critics like Sen. Ben Sasse, R-Neb., and Sen. John McCain, R-Ariz.

During the election, Trump called Romney a “choke artist” for losing the 2012 election, while Romney gave a speech calling Trump a “phony” and a “fraud.” Remarkably, Trump then considered picking Romney as his secretary of state.

Romney later revealed that he “would’ve accepted the job.” But in August, Romney was the most vocal Republican to demand Trump apologize for his apparent equivocation of white-supremacists with counter-protesters in Charlottesville, Virginia.

Trump “caused racists to rejoice, minorities to weep, and the vast heart of America to mourn,” Romney said of the president.