Behold! Unto us is born a nihilistic antidote to holiday overkill, starring Christopher Meloni and Patton Oswalt 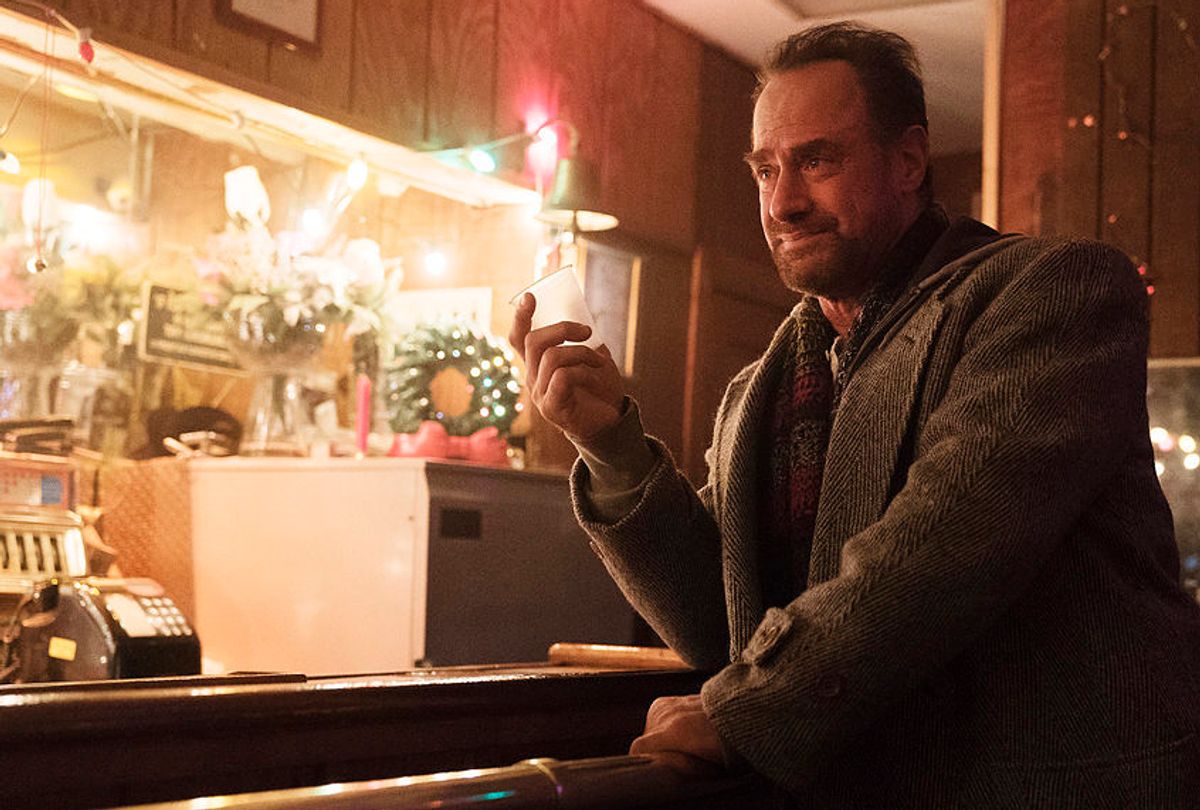 You have to appreciate a series that establishes exactly what it is, right up front. In this respect, Syfy’s “Happy!” is remarkably efficient. Within the first minute its hero, Nick Sax (Christopher Meloni), pulls out a pair of pistols and blows off the top of his own skull, transforming his head into a geyser of CGI blood. Horrifying as this sounds, the burst of shock gives way to comedy as Nick starts dancing, and the scene turns into a disco number set to a remix of “Jingle Bells.” Dancers in shiny hot pants grin and writhe around Nick as he elatedly waves his pistols and flings around the liquid scarlet gushing from his dome. Death is a party compared to his crappy, colorless life, a dream just beyond his grasp.

This “what if” moment plays out in Nick’s imagination. But his reality is no less obscenely cartoonish. Compared to what comes afterward in “Happy!” that grim fantasy is fairly tame.

If “Happy!” and its cracked-out perversity feels intoxicating, credit the dissonance between Nick’s sticky nihilism and the relentlessly cheery holiday backdrop to the sadism he endures and inflicts upon others. The shiny world surrounding the disgraced ex-cop turned hitman insists on twinkling, even as Nick pounds his way through the criminal underworld, dying at least once in the process. And this is before Nick meets Happy (voiced by Patton Oswalt), a flying blue horse who appears to Nick, and only Nick, after he’s revived from a particularly taxing encounter.

Debuting at 10 p.m. Wednesday, “Happy!” is not expressly a holiday treat, despite its setting, in the same way that Nick is not a Grinch. He harbors the same regard for the season as he does about everything else — which is to say, none whatsoever. This liberates the serialized adaptation of Grant Morrison and Darick Robertson’s graphic novel to maintain the same kind of reality-defying savagery that's illustrated on the page, while capitalizing on Meloni’s undeniable charm. The former “Law & Order: SVU” star is tough to dislike, regardless of the role he’s playing, and that helps make a series devoid of nuance and brimming with extreme violence piled atop even more extreme violence, infinitely more palatable than it would be otherwise.

Weird roles like this one allow Meloni to uncork his demented side, which he plays to the hilt in a role that might otherwise read as one-dimensional. Partnering the character with a squeaky-clean figment of someone’s imagination leavens the plot of “Happy!” Pairing Meloni with the voice of “Ratatouille” is a move of marketing genius, especially since Happy’s raison d’etre is to persuade a battered inebriate who doesn’t care about anything to save a missing, endangered little girl. In the meantime, he has to fight his way through murderous mobsters and crooked cops. One of them, Det. Meredith McCarthy (Lili Mirojnick), has a past with Nick – and she’s the only female character in this sausage banquet who receives the tiniest shred of character development.

Obstacles notwithstanding, Happy’s unyielding optimism keeps Nick on task while reminding the viewer that the many acts of carnage he commits are in the name of cuteness. Who can find fault with that?

Only people who have a medium-level threshold for mind-numbing high-velocity barbarity, I suppose. In that respect, “Happy!” tests a person’s tolerance for skull-busting, bodies flying through glass and human beings leaking blood, saliva and other fluids. There may be no more significant reminder on TV right now that we’re all just bags of meat and liquid, than this show.

But then, if you’re familiar with Brian Taylor, who directed the pilot and co-wrote it with Morrison, you already know what to expect. For the edification of everyone else, Taylor directed “Crank” and “Gamer,” and if you haven’t seen those movies, you can pretty much guess what kind of movies they are by reading the titles. Not one for subtlety, Taylor’s testosterone-flooded approach jacks up the wattage of every confrontation to the maximum limit. To slam this point home, in one scene Nick procures a keychain bedecked with a pair of metal testicles, shown in close-up. People, this is why you bought the largest flat-screen TV possible, am I right?

Such cheeky energy lends an electric pep to “Happy!” that’s oddly enticing at first. By the end of the second hour, the series becomes an entertainment best absorbed in doses, as the initial excitement calcifies into a kind of apathy that detracts from the appeal Meloni and Oswalt grant to the story. Only two episodes were available for preview, and I can’t say that I’m particularly eager to view the third or the fourth any time before the last of my neighbor’s Christmas lights come down.

For others, the simple impolite approach of “Happy!” may be a brilliant antidote to the season’s bombardment of saccharine, commercialized jolly. This ain’t the show to get in the mood to bake cookies for Santa. But if you’re already on the verge of punching Christmas right in the kisser, go ahead and set your DVR.