We are all students: The meaning of "free education"

Is free education possible in the United States? 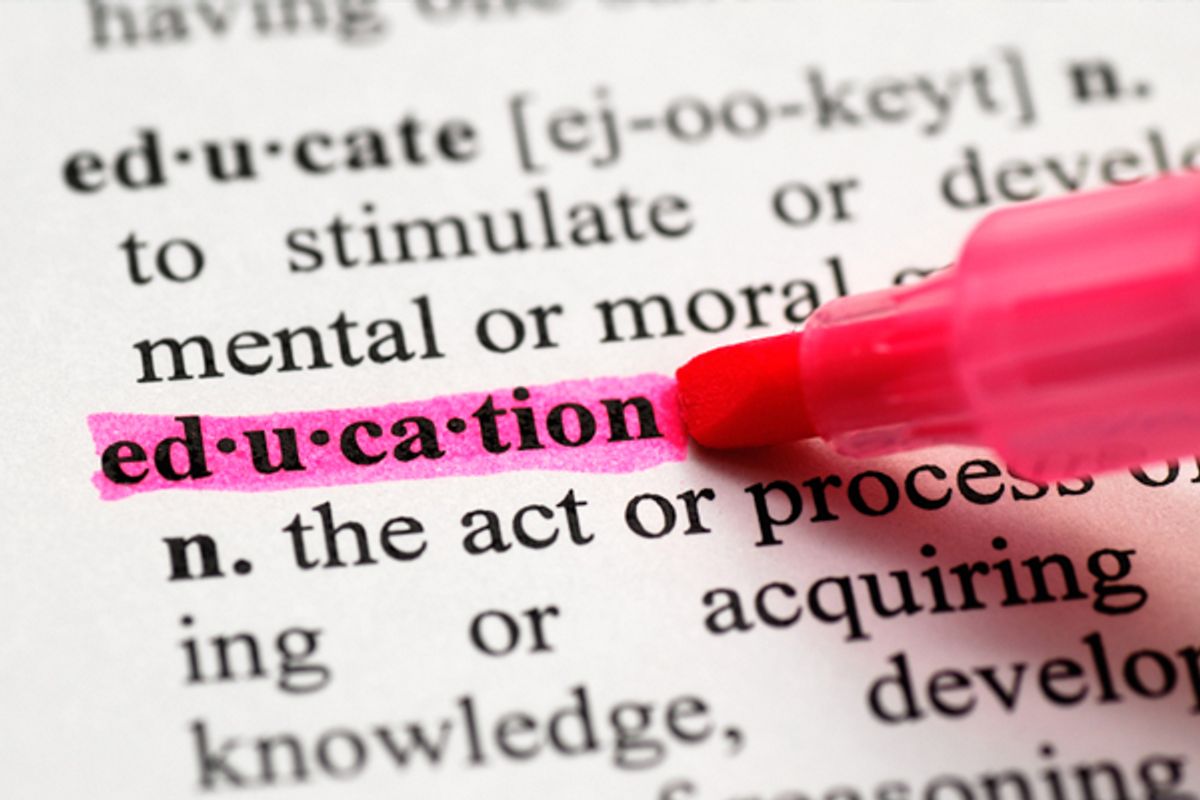 During the 2016 presidential election campaign, Sen. Bernie Sanders highlighted public, higher education in the national political discourse for the United States. He has since proposed a plan for tuition-free state universities and reducing student debt, paid for through a tax on Wall Street speculation, which "would require public colleges and universities to meet 100% of the financial needs of the lowest-income students." In a speech on 10 October, 2017, Sanders reiterated his call for free public education, speaking eloquently on the problems associated with student debt and prohibitively expensive higher education. He called for support for the College For All Act, which he has introduced in the Senate.

Versions of free, higher education for all are being implemented at state, and even city, level. Rhode Island, Oregon, Tennessee, New York State and the City of San Francisco have recently offered limited forms of free higher education. In June 2017, Tennessee passed the Tennessee Reconnect Act, which enables "every Tennessean . . . to enter or reenter public higher education with no tuition expenses." Funded by the state lottery, the act makes community college tuition free for one-year residents of Tennessee who do not already have an associate's or bachelor's degree, and Tennessee's program is the most unrestricted plan to be implemented at state level. Meanwhile, similar to Bernie Sanders's redistributive proposal, free tuition at the City College of San Francisco will be funded by taxes on luxury properties, and also offers a stipend for eligible students. All of these plans operate through some form of "scholarship" or "financial aid."

These approaches to "free education" or "education for all" rely on certain political ideas. Whether characterized as a "service" or a "right," education is something that is delivered to the people from the state. Federal or state government "possesses" free education, which it grants access to the population of the country or of individual states. People are its passive recipients. In this view, the opportunities for people to express their desire for education accessible to all is limited to electing a majority of politicians who support the initiative. Moreover, even Sanders, who speaks about a grassroots movement, frames access to higher education as the more equitable management of different financial needs — the College For All Act takes this approach — and investing in higher education, or an "educated workforce," as wise policy in a "highly competitive global economy," rather than as a political commitment to equality.

Sanders writes, "Germany eliminated tuition because they believed that charging students $1,300 per year was discouraging Germans from going to college. Chile will do the same." On the contrary, Germany eliminated tuition because students resisted the introduction of tuition fees over a period of years, staging marches and occupations, allying with trade unions and other organizations, and ultimately forcing a referendum in which most Germans did not support tuition fees for higher education.

Chile may "do the same" because of the mass mobilization of students between 2011 and 2013, and continued student protest against consequent reforms proposed by the government. As one Chilean student observed during protests in May 2017, "We were told there would be free education for all, and what we have today is a discussion in Congress about student loans." She continued, "So that is why we are pressuring the political class today, they must discuss free education, not a state loan program." In South Africa, a scheduled national tuition fees increase for 2016 was scrapped after months of student protest that generated a country-wide student revolt in late 2015, in which students marched on Parliament and other sites of state power.

These protests mobilized important ideas: free education is not subject to the procedures of government or technical fixes and reforms; rather, it exists now, within the students — within the people — who demand to participate in decisions about their lives, who can be themselves the originators of free education. In the United States, is there a way to think about education for all that goes beyond state-led initiatives, and which has potential for articulating free education within a popular movement?

Rethinking "students" in the fight for a new social order

The near ubiquity of debt in the experience of American university students is important. Elsewhere, I have suggested that thinking about the US student debt crisis in terms of neocolonialism may be useful, if such a critique of student experiences of debt can form a foundation upon which real solidarity and struggle are possible. Chilean students, in particular, were motivated to protest by the oppressive, sometimes nearly life-long student debts which they acquired along with their degrees. It is crucial to recognize, however, that debt as a form of oppression affects current, former and future students. "Student," understood in terms of an experience of oppression, is not limited to those people presently enrolled in universities, especially when debt continues to burden graduates for long years after they exit the university, and lenders await crops of freshman borrowers each year. In this way of thinking, "student" incorporates current, former and future accessors of higher education.

We must go further than recognizing a shared oppression, however. Writing in early 2016, Robin D. G. Kelley, an important scholar of the Black Radical Tradition, is critical of forms of American student activism that center victimhood or trauma, calling for diversity training and the creation of the university as a "safe space" for all. Oppression and its consequent traumas are real, but demanding recognition of these does not form the basis for an affirmative movement. Kelley writes, "the programmatic adoption of diversity, inclusion, and multiculturalism vampirized the energy of a radical movement that began by demanding the complete transformation of the social order and the eradication of all forms of racial, gender, sexual, and class hierarchy." Inclusion in exclusionary institutions ultimately confirms liberal and neoliberal conceptions of individuality. In terms of struggle, a collection of oppressed individuals is not collectivism. Rather, collectivism emerges from thinking in terms of "we" and "us" and linking this to action and affirmation — what some call political subjectivity. We can propose here one possibility for affirmative, collective understanding: We Are All Students.

"As institutions," argues Kelley, universities "will never be engines of social transformation. Such a task is ultimately the work of political education and activism. By definition it takes place outside the university." Thinking "student" as an experience not limited to enrollment in an institution enables us to expand the "student struggle" to people and communities outside the university. In South Africa, some students were able to link their struggle for change in the university to the struggles of academics, workers and communities. However, we must go beyond mutual advocacy. By locating education for all within the people, rather than within the state or institutions, the meaning of "free education" as a project can change: A "complete transformation of the social order," to quote Kelley again, begins in people. This is especially true when people can exceed categories — such as "student" — that reserve specific technical fixes for specific groups of people.

Of course, this understanding requires future-oriented thinking — or, actually, thinking without time as the guiding principle. Free education exists now, within people. It is ours already; we are not awaiting its delivery. Rather than receive it, we can make it. We Are All (Already) Students.