With every toilet flush, we expose fish and other aquatic wildlife to the pharmaceuticals we're taking 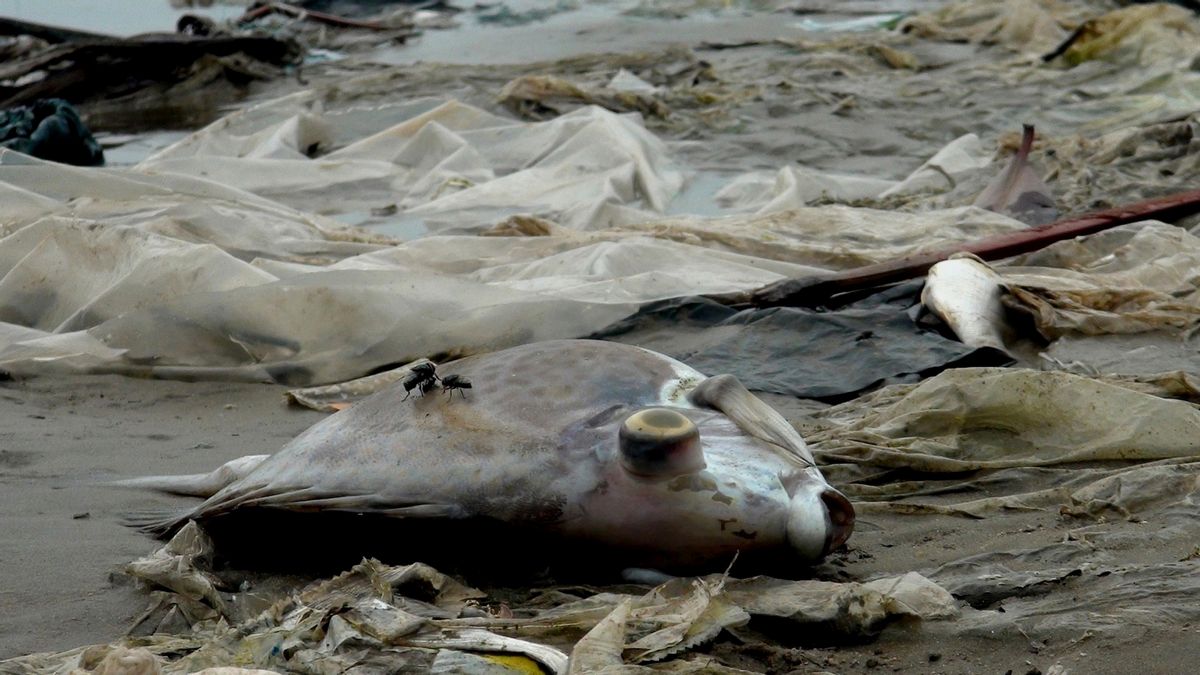 New research has found that human antidepressant medications are accumulating in the brains of fish in the Great Lakes region. Earlier research indicates the drugs could be making fish antisocial and unnaturally aggressive.

The scientists behind the recent study, from Ramkhamhaeng University and Khon Kaen University, both in Thailand, and the State University of New York at Buffalo, looked at fish living in the Niagara River, which connects Lake Erie and Lake Ontario via Niagara Falls.

"The continuous release of pharmaceuticals and personal care products (PPCPs) into freshwater systems impacts the health of aquatic organisms," they concluded, adding that the cause was "direct exposure" to the discharge from wastewater treatment plants.

Approximately 70 percent of consumed pharmaceuticals are excreted in urine, and subsequently aren't filtered out by municipal sewage systems, which primarily focus on removing disease-causing bacteria and solids like human excrement. So Prozac and other medications end up in the river, leaving fish and other wildlife exposed to a host of foreign chemicals.

In addition to various pharmaceuticals, the researchers found ingredients from personal care products in the bodies of all 10 species of fish they studied. This disturbing discovery could have significant impacts not just on the species impacted, but up and down the food chain — and entire ecosystems.

One impact is on the behavior of the fish. "When fish swim in waters tainted with antidepressant drugs, they become anxious, antisocial and sometimes even homicidal," writes Brian Bienkowski of Environmental Health News, who notes that pharmaceuticals "can alter genes responsible for building fish brains."

A 2014 study conducted by researchers from the University of Wisconsin-Milwaukee and published in the journal Aquatic Toxicology found that antidepressants cause changes in the hormone levels of fish, "indicating significant neuroendocrine changes."

They warned that even low concentrations of fluoxetine — more commonly known by the trade name Prozac — which has been found in many freshwater ecosystems, can "significantly impact mating behavior, specifically nest building and defending in male fish," such as the fathead minnow, a native North American fish species.

They found that when male minnows were exposed to Prozac, they ignored females and spent more time hiding under a tile, which resulted in lower reproductive rates. In addition, they took longer in capturing prey and also became aggressive; in some cases, even killing females. Exposed females were also impacted by producing fewer eggs.

Adding to the concern is the fact that the fish behavior was altered even with low doses of the drug. "At high doses, we expect brain changes," said Rebecca Klaper, a professor of freshwater sciences at the University of Wisconsin-Milwaukee and co-author of the 2014 study. "But we saw the gene expression changes and then behavioral changes at doses that we consider environmentally relevant."

Dr. Diana Aga, a chemistry professor at SUNY Buffalo and lead researcher of the Great Lakes study, said she and her colleagues detected antidepressants in all 10 species studied: smallmouth bass, largemouth bass, rudd, rock bass, white bass, white perch, walleye, bowfin, steelhead and yellow perch. The highest drug concentration — 400 nanograms of norsertraline per gram of brain tissue — was found in rock bass. Norsertraline is produced in the body by sertraline, the active ingredient in Zoloft.

The major pollutants they found were the antidepressants Celexa, Paxil, Zoloft, Effexor and Wellbutrin. Also found in high concentrations were metabolites of fluoxetine (Prozac) and sertraline (Zoloft), as well as diphenhydramine, an antihistamine commonly found in over-the-counter flu and cold medications.

With every toilet flush, more harm to wildlife

The more pharmaceuticals we dump into waterways, the worse it gets, as many of these chemicals are bioaccumulative, meaning that the fish and other aquatic wildlife absorb the chemicals at a rate faster than their bodies can break it down or excrete it.

"These active ingredients from antidepressants, which are coming out from wastewater treatment plants, are accumulating in fish brains," said Dr. Aga. "It is a threat to biodiversity, and we should be very concerned."

Since wastewater treatment plants do not filter out these drugs, she said, "wildlife is exposed to all of these chemicals. Fish are receiving this cocktail of drugs 24 hours a day." In the Great Lakes fish, the "highest bioaccumulation was found in the brain, followed by liver, muscle and gonads."

The high concentrations are connected to the sheer amount of antidepressants Americans take. As Bienkowski notes, "about 250 million prescriptions are filled every year. And they also are the highest-documented drugs contaminating waterways."

Dr. Randolph Singh, one of the co-authors of the Great Lakes study, said such human-caused, synthetic alterations to fish brains have the potential to disturb the harmony of biodiversity that maintains ecosystem stability. Most people don't eat fish brains, so the antidepressants found in them would likely not pose a human health hazard, but he warned, "The risk that the drugs pose to biodiversity is real, and scientists are just beginning to understand what the consequences might be."

The researchers said wastewater treatment plants must address these drugs to keep them out of the environment. "These plants are focused on removing nitrogen, phosphorus and dissolved organic carbon," Dr. Aga said. "But there are so many other chemicals that are not prioritized that impact our environment."

Biochar to the rescue?

Other research indicates that biochar—a cheap porous charcoal material converted from agricultural waste that is a precursor to activated carbon — can be used to remove pharmaceuticals from urine. Biochar made from activated coconut carbon, bamboo and southern yellow pine has been shown to have the highest pharmaceutical removal properties.

Dr. Treavor Boyer, an associate professor in the School of Sustainable Engineering and the Built Environment at Arizona State University, and Avni Solanki, a Ph.D. candidate in Environmental Engineering Sciences at the University of Florida, have studied biochar to see if it could work as a viable method for removing pharmaceuticals from urine in order to reuse it as a fertilizer. The results are promising.

"We wanted to look at a low-cost material that all countries could use [for wastewater management], whether developed or developing," said Solanki. They said they were also pleased "to see that something this cheap with such a low environmental footprint could actually be applied for pharmaceutical removal and nutrient recovery."

"There is also some work on urine-diversion from the toilet," Dr. Aga told AlterNet. She noted the work of the Rich Earth Institute, a nonprofit supporting sustainable agriculture by working to turn human urine into fertilizer.

Until municipal wastewater treatment plants start filtering out pharmaceuticals, people who want to remove pharmaceuticals from their urine might be able to do so using a DIY biochar filter. Of course, we could also stop taking so many antidepressants. But that's another story.

Reynard Loki is AlterNet's environment, food and animal rights editor. Follow him on Twitter @reynardloki. Email him at reynard@alternet.org.