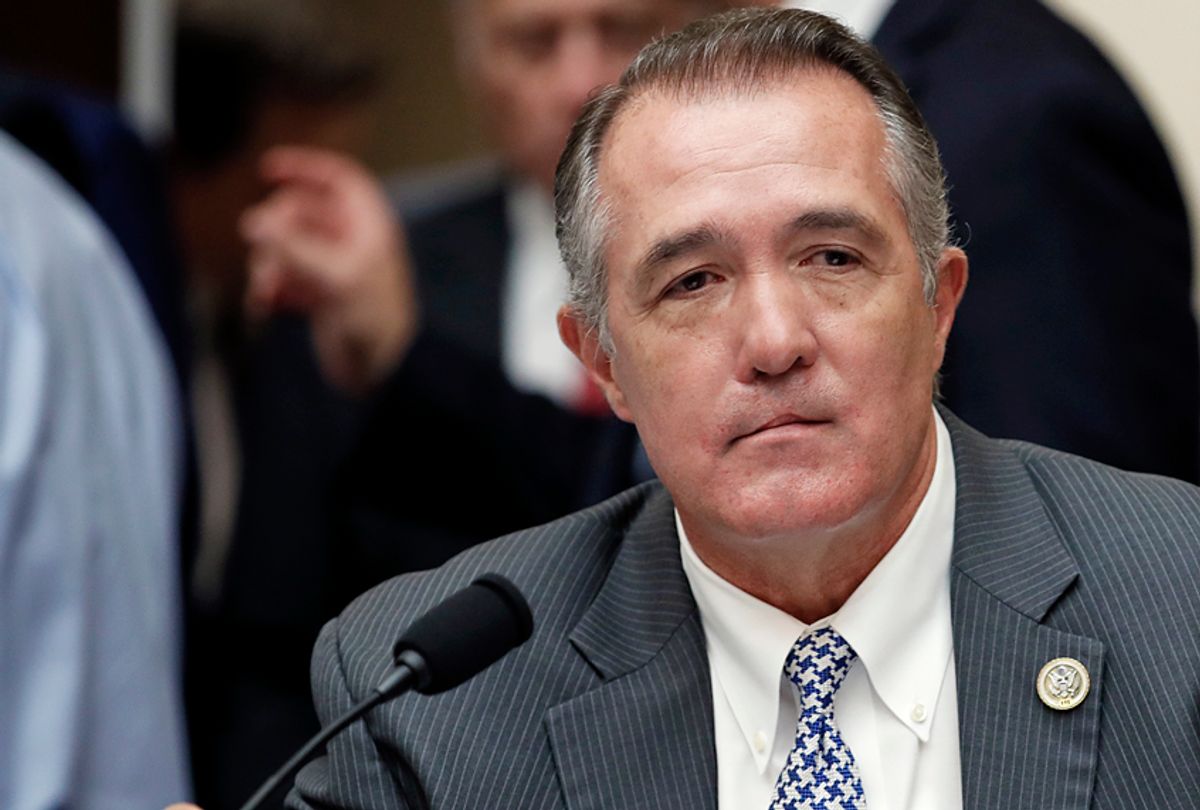 For the past week, the political rumor mill has been churning that Congressman Trent Franks' time in office would soon come to a close. On Thursday night, the Republican representative from Arizona put the speculation to rest when he announced in a statement that he would resign from office on Jan. 31, 2018.

But after Politico confronted him about additional allegations on Friday, the congressman bumped up his timeline, effectively resigning immediately. The eight-term lawmaker was reportedly given an ultimatum by Speaker Paul Ryan.

Multiple staffers have come forward saying that they had been propositioned by Franks. One former staffer told the Associated Press that the staunchly conservative congressman solicited her at least four times to serve as his surrogate, offering as much as $5 million. (Notably, Franks' net worth has increased by 340 percent since he entered Congress in 2004, according to data analyzed by Ballotpedia.)

Franks has denied those the allegations, Politico said.

In what sounds like the plotline of "The Handmaid's Tale," a TV series (adapted from a book) about a dystopian future where an elite caste of Christian fundamentalists with barren wives systematically rape their eponymous servants to bear their children, we have yet to witness this form of harassment in the post-Harvey Weinstein fallout.

Franks and his wife, Josephine, have reportedly struggled to conceive. In his Thursday night statement, the 60-year-old revealed that his wife had suffered three miscarriages. While they already have twins via a surrogate, Franks said that "the process by which they were conceived was a pro-life approach that did not discard or throw away any embryos."

The biggest irony of this is that Franks is deeply against all abortions and does not believe in traditional in vitro fertilization (IVF) procedures. As Alana Romain wrote at Romper:

In Franks' statement, he indicates that his twins were born using a gestational surrogate who was not genetically related to his children. That means that the couple must have used IVF, yet the anti-abortion Louisiana Right to Life Federation argues, as many similar organizations do, that gestational surrogacy and IVF result in "many unborn babies that are sacrificed for the sake of the healthy children," because of the creation of multiple embryos. That statement is obviously only accurate if you consider conception the beginning of human life — a viewpoint that is not recognized by the medical or scientific communities.

"Last night, my wife was admitted to the hospital in Washington, D.C. due to an ongoing ailment,” Franks said. "After discussing options with my family, we came to the conclusion that the best thing for our family now would be for me to tender my previous resignation effective today, December 8th, 2017."

Franks is the third lawmaker this week to announce a resignation after being accused of sexual misconduct, following Rep. John Conyers, D-Mich., and Sen. Al Franken, D-Minn.