Neil Young's "Harvest": The sound of a hippie gatecrashing Nashville

Like Bob Dylan before him, the anti-establishment singer braved the country establishment to record his masterpiece 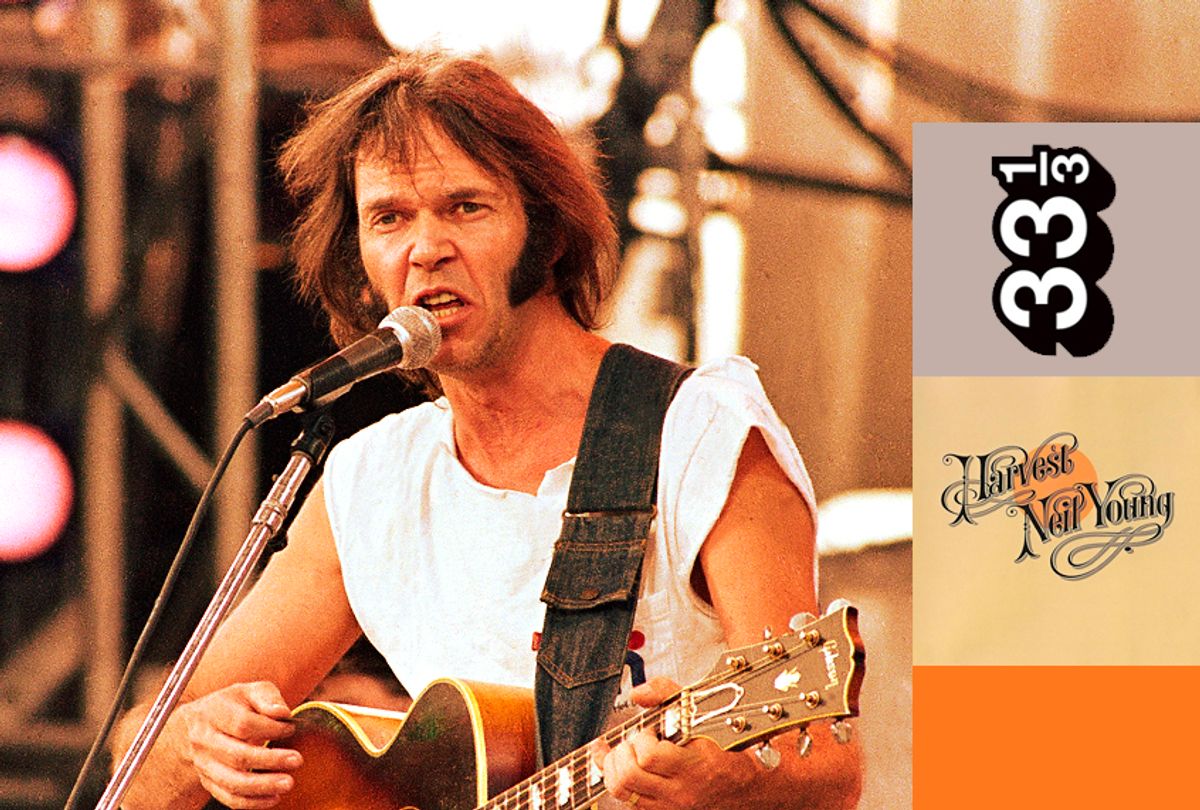 The differences between Nashville and LA or New York weren't just musical: they were political. To his audience, Neil Young was a figure of the hippy counterculture. The Buffalo Springfield had been prime movers in the alternative LA scene, embracing its drug culture and opposition to established authority. Crosby, Stills, Nash & Young's very existence seemed to be a political statement, their every utterance scrutinised for its significance by fans and journalists. When four students were killed at Kent State University in 1970, Young documented his horror in "Ohio." Recorded by CSNY and rush-released within a month of the event, the resulting hit single was an unequivocal and powerful protest. Then, of course, there was "Southern Man," Young's polemic against Southern racism and the Ku Klux Klan.

But country music was the music of the Southern Man, and there was little in common between the country world-view and the hippy outlook. The hippies were anti-establishment: country music was an establishment, and one that was strongly allied with forces of conservatism. Country songwriters might romanticise the plight of the soldier, but not because they were opposed to the Vietnam war. Sensitive hippies at least paid lip service to the rise of feminism; with a few exceptions such as the remarkable Loretta Lynn, country music championed traditional, paternalistic family values. Even walking around with long hair was likely to get men beaten up in parts of the South, while open drug use was unheard of. Hippies and country music fans eyed one another from a great distance, with deep and mutual suspicion.

Embracing country music was thus a brave decision for someone who was a hero of the counter-culture, an icon of radical thought and politics. At least, it was when Bob Dylan did it.

Dylan already had a track record for upsetting his fans, having caused consternation among serious young men when he "went electric” in 1965. His decision to cast aside The Hawks and use Nashville session musicians to back him on 1966's "Blonde On Blonde" must have seemed equally perverse, although there was little on the album that sounded "country”. It was the professionalism of the musicians that had impressed Dylan and producer Bob Johnston: Nashville's finest had almost certainly never been faced with an epic like "Sad-Eyed Lady Of The Lowlands" before, but they had no trouble picking it up and playing it, straight off the bat.

Having recovered from a near-fatal motorbike crash, Dylan spent much of 1967 recording with his live band. The results, universally known as the "Basement Tapes," were widely circulated in the music business as a catalogue of new Dylan songs for other artists to record, but he chose not to make them available to the public. Instead, he returned to Nashville to make an album of new material called "John Wesley Harding." The recordings were stark and unadorned, while the material bore a clear country influence.

Dylan's next album went even further. It was not only recorded in Nashville, but named after the city. It boasted a duet with Johnny Cash, perhaps the biggest star in country music. Dylan's songwriting had also undergone a seismic shift. Grandiose allegories and clever wordplay had given way to simple, almost banal lyrics, and the harsh musical landscape of "Blonde On Blonde" had softened to the point where Dylan's singing actually sounded tuneful. "Nashville Skyline" was not the first or the best meeting of pop and country traditions, but it was by far the most important. It was also the first to be a hit.

Bob Dylan was not the only pop artist to be ahead of his audience in liking country music. The West Coast cognoscenti got turned on to bands like Area Code 615, whose popularity was boosted by the fact that Kenny Buttrey had drummed on Dylan's albums. Artists like Johnny Cash and Merle Haggard had plenty of admirers in the wider music business, and there were points of contact between country and hippy ideologies. Self-important rock stars craved the air of authenticity that surrounded country, its status as an American folk music. Johnny Cash was seen as the champion of the downtrodden and the outcast, and also had a drug intake that any self-respecting pop star would struggle to match. Meanwhile, other country stars were struggling to break the yoke of artistic control exercised by record company bosses, and looked enviously at the pop stars who were free to make the records they wanted to.

Like many others in the hippy movement, Neil Young was appalled by racism and the other problems that blighted the American South. However, Young seems never to have felt the almost instinctive distaste for country music and its culture that others, such as David Crosby, had to overcome. Young had grown up in Canada, where there was no civil rights struggle, no bitter legacy of Civil War division and slavery. Country radio had come crackling through the ether over the Great Plains just as had pop stations and rock 'n' roll shows. All went to make up Young's childhood musical education. As a good hippy, he would protest indignantly about prejudice and injustice in the South, yet he was never the kind of rock star who would flinch at the sound of a pedal steel guitar. The gut-rooted association between country music and redneck politics never seems to have taken hold in Young.

By the time Neil Young made it to Nashville, the idea of a counter-culture rockstar collaborating with the redneck enemy had lost some of its political significance. "Nashville Skyline" was almost two years old, and its impact had been followed up by the likes of The Band. The city itself was becoming recognised as a place where musicians got things done, quickly and well, and artists of all shapes and sizes were flying there to record. Rock and country were beginning to build a shared audience thanks to syndicated TV extravaganzas like "The Johnny Cash Show," which showcased country's biggest acts alongside the likes of Dylan, Joni Mitchell and James Taylor.

Although it could still provoke ill-feeling, in 1971 it was no longer automatically assumed that a pop star going to Nashville was about to become a poster child for the Republicans - in Young's case, that wouldn't happen for another ten years. Nor did it necessarily mean that he would come back with an album of country music. It could, however, be a comment on the state of rock music. Dylan's alignment with the Nashville music industry was a deliberate reaction against the more complex, experimental approach to record production that was becoming commonplace in pop and rock music. The Beatles' "Sergeant Pepper's Lonely Hearts Club Band" had triggered this rash of studio experimentation on its 1967 release. Many found it inspiring, but Bob Dylan was not among them. "I thought 'Sergeant Pepper' was a very indulgent album,” he later said. "I didn't think all that production was necessary."