Warning: Keep your hands on the wheels of driverless cars 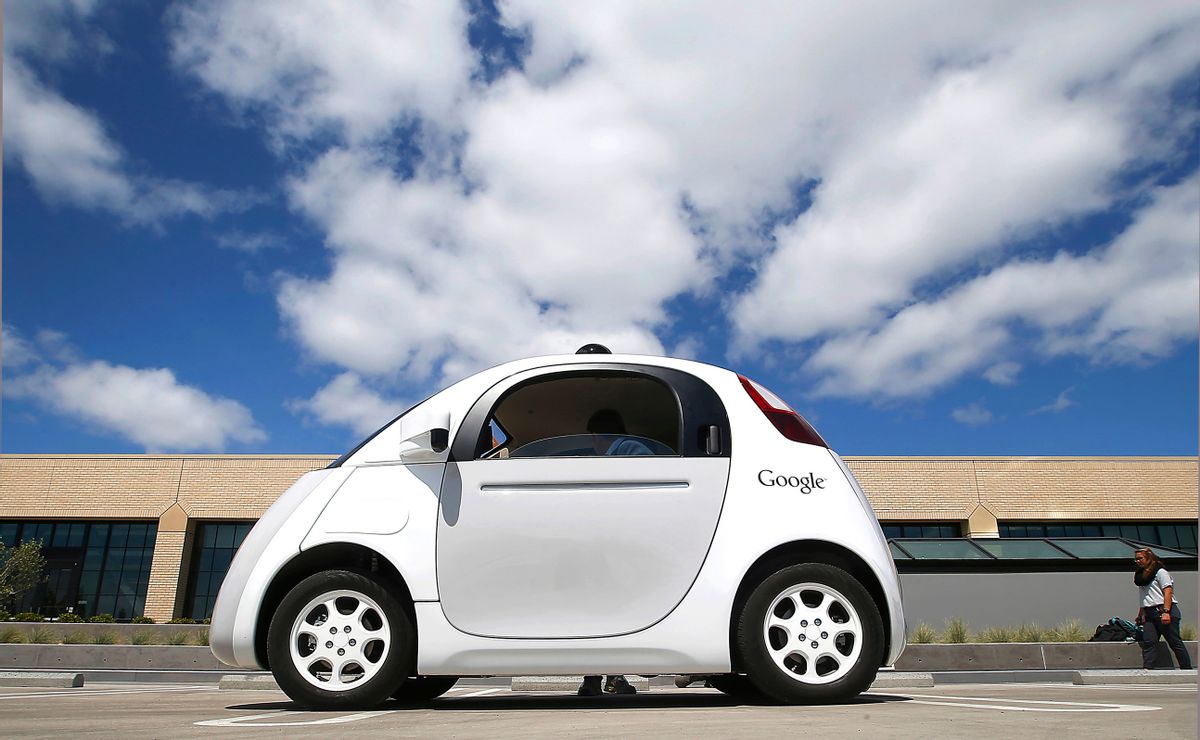 FILE - This May 13, 2015, file photo, shows Google's self-driving car during a demonstration at the Google campus in Mountain View, Calif. The U.S. auto industry's home state of Michigan is preparing for the advent of self-driving cars by pushing legislation to allow for public sales and operation _ a significant expansion beyond an existing law that sanctions autonomous vehicles for testing only. (AP Photo/Tony Avelar, File) (AP)
--

The era of driverless vehicles appears to be rapidly approaching, raising a bevy of urgent questions about how to prevent the emergence of new hazards on the nation’s roads.

So, how much preparation have federal transportation authorities carried out to meet the challenge of the advent of self-driving cars and trucks? Not nearly enough, according to a new 44-page report by the Government Accountability Office, a Congressional watchdog agency.

Citing numerous scenarios in which autonomous vehicles could cause tragedies, the GAO said a lack of comprehensive planning makes it unclear whether federal transportation officials “are well-positioned to fully address the challenges posed by automation.”

The report’s most vivid sections zero in on practical driving concerns. For example, what happens when an automated vehicle recognizes a hazard, such as a boulder, in the road – but can’t get around it because it’s programmed not to cross a double-yellow line?

Also, how would a driverless car judge what a pedestrian or a bicyclist will do at an intersection?

And what would happen when an autonomous vehicle programmed to drive within the speed limit frustrates drivers in conventional cars who want to speed ahead? After all, it could be years or decades that autonomous vehicles share the roads with cars with people behind the steering wheel.

Most troubling of all, how should an autonomous vehicle be programmed for situations where there is no good outcome – for instance, if a child suddenly decides to cross a road, and the options are striking the youngster, careening off an embankment or barreling into a tree?

Developers and promoters of robot cars say that by eliminating driver errors they could greatly reduce the toll of nearly 40,000 U.S. traffic deaths per year. Driverless vehicles, they say, also will reduce traffic congestion and give the blind and other disabled people a means to motor around their communities.

But the cautionary report comes at a time when, safety advocates argue, auto manufacturers and federal officials seem to be rushing head-long into putting tens of thousands of driverless vehicles on public roadways without resolving safety concerns. Just last week, the president of General Motors, Daniel Amman, told journalists in San Francisco that self-driving cars would be ready for consumer applications in “quarters, not years.”

The debate over regulating driverless vehicles heated up in September, when the Transportation Department issued largely voluntary guidelines for testing automated cars. The guidelines were criticized by consumer groups, including the Advocates for Highway and Auto Safety, which called it “a hands-off approach to hands-free driving.”

As FairWarning has reported, a series of surveys this year by institutions ranging from MIT to the AAA show that most motorists don’t want to drive, ride in or be on the road anywhere near an autonomous vehicle. What’s more, as development efforts pick up steam, the level of public skepticism seems to be mounting.

Even so, the U.S. House of Representatives has approved a bill allowing self-driving vehicles to operate on public roadways with minimal government supervision. Similar legislation has been OK’d by a Senate committee, but is currently stalled by a handful of senators concerned about safety provisions.

The GAO report, issued last week to leaders of Congressional transportation and technology committees, generally has gotten a muted response from lawmakers. A spokesman for Sen. John Thune, the South Dakota Republican who chairs the Senate’s Commerce, Science and Transportation Committee, told FairWarning that the GAO report underscores the need for regulators “to take a systematic approach to safety and cybersecurity” and “for legislation setting a dedicated framework and new authorities to help the federal government keep pace with rapidly advancing technology.”

The Transportation Department, for its part, said it concurs that a comprehensive plan will eventually be needed. But in a prepared statement published alongside the GAO report, a department official said such a plan is “premature,” because of “the nature of these technologies and the stage of development of the regulatory structure.”

The GAO report was based on interviews with 27 manufacturers, industry groups, academics, and government and safety organizations.

Sean Kane, president of Safety Research & Strategies Inc., one of four safety organizations interviewed by the GAO, praised the agency’s recommendations but downplayed the likelihood they would have much impact. Kane said federal regulators have already ceded so much control over automated automotive technology to manufacturers that, by and large, “the train has left the station.”

“Basically, we’re leaving it to the marketplace to make important decisions on functional safety,” he said in a telephone interview. He said the consequences of that approach already are apparent, citing the highly publicized cases in recent years of defective General Motors ignition switches and ruptured Takata airbags.

Things will only get more deadly, Kane said, with insufficient regulation of driverless vehicles.

“It’s a rush to make everything look cool and it’s modeled after software in computers that’s beta tested on the consumer and fixed when there are complaints. But it’s tougher when 4,000 pounds are moving down the road,” Kane said. “But that’s what’s happening – it’s a race to the bottom.”

Russ Rader, spokesman for the Insurance Institute for Highway Safety, another one of the safety groups interviewed by the GAO, urged federal regulators to require on-board data collection to evaluate how driverless vehicles are working.

“Anyone who uses a computer knows that computers often fail in tasks far simpler than driving a car,” Rader said. “And we need to be equipped to monitor how these systems are working and whether the technology is living up to its safety promise.”

Rader said in an e-mail that while driverless vehicles offer the promise of improved traffic safety, “the aggressive timelines bandied about for consumer use of fully autonomous vehicles are likely overly optimistic.”

He pointed out that automakers have pledged to make a simpler existing technology – automatic emergency braking – standard on all new vehicles, but even that isn’t supposed to happen until 2022.

A key issue the GAO report did not address was cybersecurity, including the possibility that the computers in automated vehicles could be hacked to turn them into killing machines that could be steered into crowds or buildings.

“That’s a whole other issue,” Kane said. “I hate to make predictions but we’re building a substantial structure on top of a very weak foundation. Ultimately, there’s a lot of places where there’s going to be structural failure.”