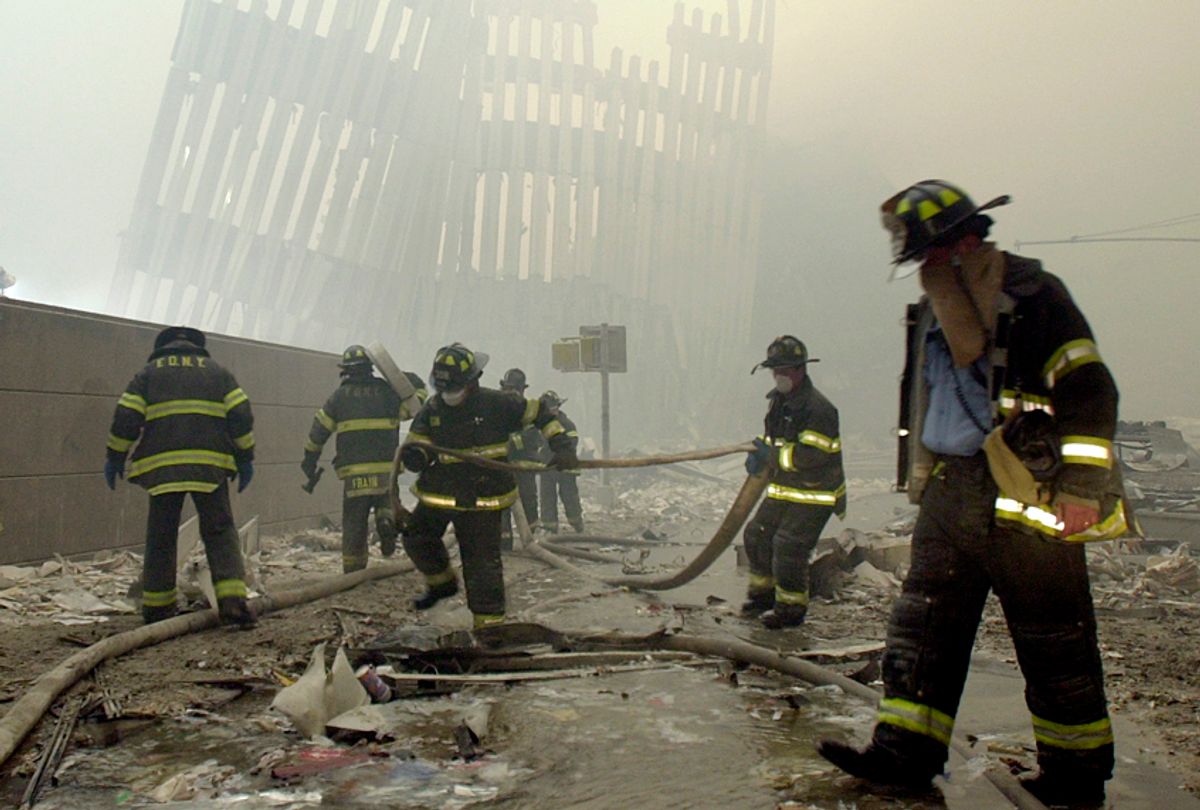 This article originally appeared on Insider NJ. Republished with permission.

For years we vowed to "never forget” our 9/11 first responders and yet, more than 16 years later, there’s strong circumstantial evidence that’s just what has happened. Perhaps we look away because the truth is just too awful and our absurd current national narrative is just too distracting.

Our inattention comes as thousands of these first responders, yesterday’s 9/11 heroes, are dealing with their deteriorating health and battling diseases, including a myriad of cancers. For the 90,000 first responders in the New York area, the toxic exposure they experienced to the caustic and poisonous air at  the World Trade Center site will cast a lifelong shadow over them and their loved ones.

Two days after the attack, then EPA Administrator Christie Todd Whitman, the former New Jersey governor, made a  public pronouncement that the air was safe to breathe in lower Manhattan. That got Wall Street back up and running, but for many first responders it was like being mortally wounded by friendly fire.

Whitman issued a press release downplaying any air quality issues in lower Manhattan: “We are very encouraged that the results from our monitoring of air-quality and drinking-water conditions in both New York and near the Pentagon show that the public in these areas is not being exposed to excessive levels of asbestos or other harmful substances. ... Given the scope of the tragedy from last week, I am glad to reassure the people of New York … that their air is safe to breathe and the water is safe to drink.”

This dubious statement, for which Whitman has recently apologized, had profound consequences for the 90,000 first responders. It also will have life long impacts for  the 400,000 additional men, women and children who are classified as World Trade Center “survivors.” This group of people lived and worked in lower Manhattan (below Canal Street) should also be getting lifetime health screening, according to Dr. Michael Crane, the medical director at the WTC Health Program Clinical Center of Excellence at Mount Sinai.

The survivors include tens of thousands of civil servants who kept the city, state and federal court systems running as well as other critical government offices operating. Also in this diverse mix are thousands of children who either lived in the toxic zone or attended school there. No doubt it also includes tens of thousands of commuters who worked in the zone during the three months the WTC fire continued to burn, and the several months after that when the massive clean-up continued to generate clouds of toxic dust.

Crane said that about three-quarters of the first responders have been medically screened but that only 12,000 people are in the survivor program, only about 3 percent of the 400,000 WTC survivor population. “My understanding is that there is a tremendous influx now of patients who are becoming ill, or recognizing their illness and trying to get care,” Crane said in an interview that he gave me in my capacity as a reporter for the Manhattan-based Chief-Leader.

“Certainly we know very well by the studies from the World Trade Center Registry, which combines the population both of responders and survivors, that the folks who went to work, opened their windows, sat in rooms that had air conditioning ducts full of dust [or] went to school had significant exposures and those exposures are adding up to ongoing illness,” Crane said.

“Maybe not at the rate of the responders, who had a more concentrated exposure, particularly if they were there on 9/11 but certainly a significant exposure," he continued. "What that has come to mean to us is that there will be disease. So those officers, teachers, those Manhattan Community College  students, those students at Stuyvesant High School, all of these folks are at risk for illness based on what we have learned.”

Part of the toxic exposure was a consequence of a steep learning curve by officials, according to Crane. “It seems there was a generalized lack of coordination and lack of understanding about the need to get this stuff cleaned up  and cleaned out. Over time it has happened,” he said. “Before, people were living in it and breathing it — it counts as exposure, maybe low-level exposure,  but nevertheless ... we believe it is significant.”

Dr. Crane it was critical that people who may have suffered WTC toxic exposure get screened, not just for their own well-being but so that doctors can accurately map the dozens of known ailments and cancers, as well as identify medical issues that researchers have so far missed. “It has always been a civic act to be screened,” Crane said. “It has always been an act of heroism to step forward and say, ‘You know, I may not be sick now but I know this is important for science, and for my friends, and for my family, my co-workers, and the people in the community.’

“My personal concern and my personal fear," Crane continued, "is that the family of cancers that are going to be highly prevalent in our population will be very, very rare ones, ones that are usually ‘one in a million.'" Such cancers may be "concentrated  in the people we have not seen yet and will never know about. … It is so important for a public health program like this, where we are trying to evaluate the impact of this exposure over the long term, to see as many people of the impacted population as we possibly can.”

While the majority of first responders have been screened, many find themselves enmeshed in an expensive legal legal battle to get officially designated as WTC-disabled, even though they have been certified with a WTC disease and declared disabled by the Social Security Administration. Without that designation from their respective pension funds they can’t avail themselves of the federally-endowed September 11th Victim Compensation Fund. That multi-billion fund will compensate them and their families for the economic losses they experienced because their working lives were in many cases cut short by decades.

Survivors who lived, worked or attended school in the zone south of Canal Street and have subsequently been stricken with WTC-linked illness or a related condition can also qualify for  both the Zadroga Act and the federal Victim’s Compensation Fund, according to attorney Michael Barasch. One of the leading WTC compensation lawyers. Barasch represented New York police detective James Zadroga, for whom the Zadroga Act is named. Barasch's firm has helped 5,000 clients collect $1 billion from the WTC Compensation Fund. “That toxic dust was very democratic,” Barasch said in a phone interview.

Last month, at a public hearing held by the New York State Senate Committee on Pensions and the Civil Service, both New York state and New York City officials testified that they have rejected more 9/11 WTC disability claims from first responders than they approved. The New York state system  also covers employees of the Port Authority of New York & New Jersey.

Colleen Gardner, executive deputy comptroller for the New York State and Local Retirement System, told the Senate committee that out of 331 applications for  WTC disability, “100 of those applications are still being processed, 115 applications have been approved, 101 have been disapproved for medical reasons and 15 were disapproved for administrative reasons.”

Until very recently Gary Smiley, 53, a retired FDNY rescue paramedic, was caught up in an expensive bureaucratic nightmare with NYCERS. Smiley survived the collapse of both WTC towers and at one point had to dive under his rig for cover. At the center of the most intense part of the debris cloud, he couldn’t see anything and could hardly draw a breath.

On the day of the attack he witnessed the worst of the human carnage, which included seeing the bodies of people who had  jumped from the upper floors of the towers hitting the ground all around him. For a few days he was hospitalized with severe respiratory distress and severe smoke inhalation. But  he was drawn back to the pile with his colleagues to work on the recovery effort.

“I left in 2012 after I did my 25 years," Smiley said. "I wasn’t dead yet and I wanted to get out of the state. I moved to North Carolina and started working as a paramedic for the city of Charlotte but had to come back to New York City for sinus surgery I needed. When I got back to Charlotte, I was fired for absenteeism and I lost my house.”

Back in New York, he said it was difficult to find shelter and at one point, despite his serious respiratory issues, was living in a mold-infested house. “My biggest problem was being able to get a place with my therapy dog, but thanks to help from Homes for Heroes I found a decent place in New Jersey,” he said, not far from his grandchildren in Staten Island.

Both the Social Security Administration and the New York Workers Compensation Board signed off on Smiley's 9/11-related disability. After he lost his first round with NYCERS in 2013, Smiley hired an attorney and exhausted all of his internal appeals. Having struck out at NYCERS, he filed a legal challenge known as an Article 78 case in state court. In January 2017 the judge in the case ordered NYCERS to reconsider his disability claim.

“This is my fifth medical board and it has been dragging on for four years," Smiley said. "I had to hire two lawyers and I have spent $25,000.” The former paramedic says he’s not alone when it comes to EMS workers caught in NYCERS' revolving door. "We have one woman with 9/11-linked breast cancer and we have another with 27 hospitalizations from asthma, and NYCERS turned them both down,” he said. Smiley finally got his NYCERS sign-off for his WTC disability last month.

In between his many medical appointments, Smiley works to help his fellow first responders, still struggling to navigate a pension bureaucracy that was not designed to handle the post-9/11 wave of claims.

For New York City employees who played a role in the massive WTC response and recovery, the first step is often to get a certificate confirming they participated in the effort. The sites that are covered include the city morgue and the Fresh Kills Landfill, where debris was screened for remains. So far, the city has rejected close to 40 percent of these applications, which applicants have to swear and attest are true.

“We are currently working with 40 to 50 members to see if we can get them verified,” Smiley noted. “They get rejected mostly because either the member needs more detailed information about their time at the scene or NYCERS feels as though the forms and information needs to be better verified.”

“Here we are 16 years later, and we have people that are dying, basically, and are not getting the benefits to which they are entitled,” said Oren Barzilay, president of Local 2507, which represents the FDNY EMS/EMT personnel.  “Are they just waiting for us all to die?”