How the Saudis escalated Yemen struggle beyond all control

The Yemen Civil War could have been a local power struggle, if not for the Saudis' heavy hand 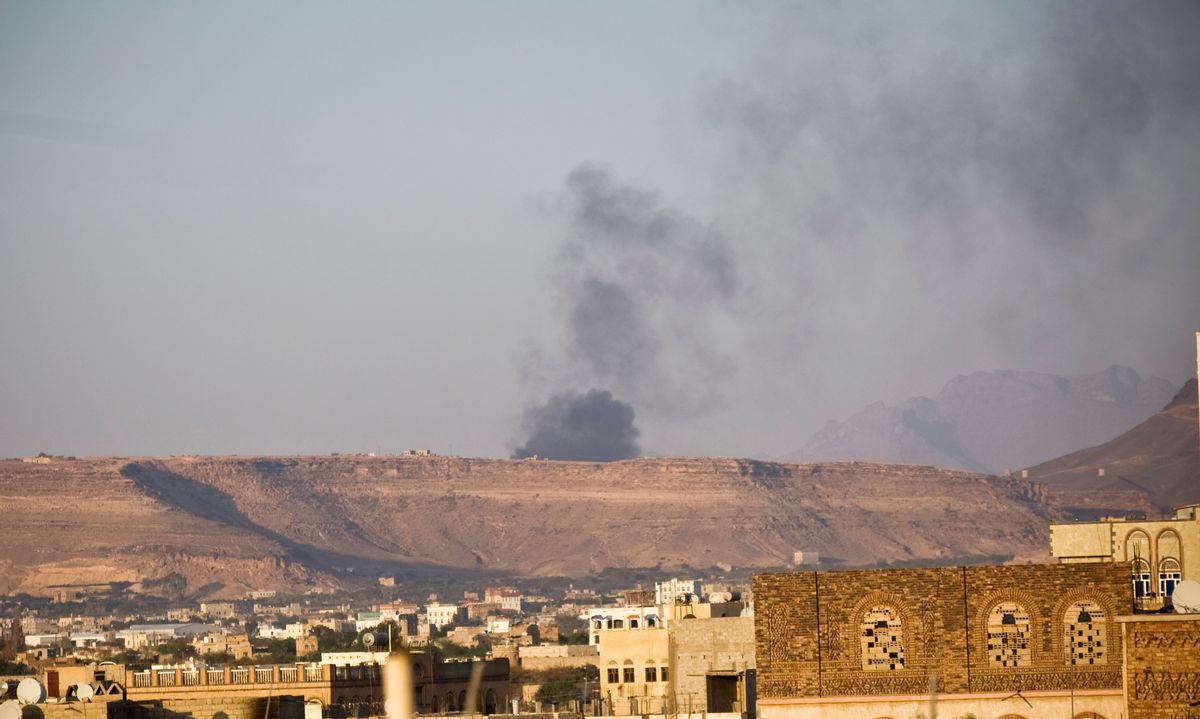 Yemen is a small, poor country in a region empires have plundered for centuries. This civil war is a local struggle that has been escalated out of control by the ambitions of powers outside of Yemen — mainly Saudi Arabia.

The British Empire ruled the Yemeni city of Aden in South Yemen as a colony, a refueling station for ships on the way to the Empire's Indian possessions. Gaining independence in 1967, South Yemen had a socialist government from 1970 on, becoming the People's Democratic Republic of Yemen (PDRY).

Northern Yemen was ruled by a king from the city of Sana'a who followed of the Zaydi denomination of Islam, clashing periodically with both the British and with the Saudi kingdom over borders in the 1930s. Arab nationalist revolutionaries overthrew the king in 1962, starting a civil war between nationalists, backed by Arab nationalist (Nasserite) Egypt and royalists, backed by Saudi Arabia, Jordan, and Iran (then a monarchy too). A peace deal was reached and by 1970, even Saudi Arabia recognized North Yemen as the Yemen Arab Republic (YAR).

North and South Yemen talked about unification throughout the 1970s and '80s, and it finally happened in 1990, after the fall of the Soviet Union that had been South Yemen's most important ally.

Ali Abdullah Saleh, who was killed this December 3, was a military man who had been president of North Yemen since he was appointed by a junta in 1978. He became president of the unified country in 1990.

Saleh had to navigate a dangerous time for the Arab world. When Saddam Hussein's Iraqi forces invaded Kuwait in 1990, the US under Bush declared a New World Order, showing that the US could now operate in the region without any concern about a Soviet deterrent. Yemen happened to be on the UN Security Council in November 1990 when Resolution 678 authorizing the use of force to remove Iraq from Kuwait — authorizing the first Gulf War, in effect — came up for debate. Yemen voted against the resolution. The American representative famously told his Yemeni counterpart, “That was the most expensive vote you ever cast.” Yemen, which had hundreds of thousands of workers in the oil-rich Gulf countries including Kuwait, found its workers expelled and its Western aid programs cut when the war was over. Yemen was made an example of.

The post-1990 war sanctions on Iraq, which by most estimates killed hundreds of thousands of children through malnutrition and preventable disease, as well as the US military bases in the Arabian peninsula, were extremely unpopular in Yemen (as elsewhere in the Arab world). So was the lack of progress in ending the occupation of the West Bank and Gaza by Israel, as people gradually realized that the Oslo Accords had frozen the occupation rather than ending it.

People from wealthy and powerful Yemeni families, among them veteran of the Afghan jihad Osama bin Laden (in fact there were numerous Yemenis who fought against the Soviets in Afghanistan), wanted to raise a local Arab force to secure the Arab peninsula and have the US military leave. But the idea was a non-starter with the Saudi kingdom that hosted the Americans.

When bin Laden's al Qaeda attacked US embassies (killing 44 embassy personnel and 150 African civilians), a US naval vessel (the USS Cole), and finally US civilians on 9/11, the US declared a war on terror. Saleh had learned his lesson from 1990 and agreed to cooperate with the US after 2001.

By this time, Saleh had been in power for more than two decades, and had enriched himself and his family in the process (his son, Ahmed Saleh, was a commander in an elite army unit). The vice-president, Abdrabbah Mansur Hadi, also headed a powerful and wealthy family. Other “big names” in Yemen include the Al-Ahmar family (which includes the current Vice President in exile and army general Ali Mohsen al Ahmar, billionaire media owner Hamid al Ahmar, and the founders of the Islamist, Muslim Brotherhood affiliated Islah party) and of course the Houthi family of Sa'ada, a mountainous governorate on the border with Saudi Arabia. The Houthis, like the old kings of North Yemen, are of the Zaydi denomination.

The term “tribe,” used by the British Empire for its imperial purposes of classification and rule, refers to a genuine social phenomenon, but is not especially useful in explaining the politics of Yemen. The country's elite is indeed organized in extended family networks, but this is arguably not so different from Western countries (how many Bushes and Clintons have participated in ruling the US empire by now?). Politicians and bureaucrats use public office to enrich themselves.

This, too, is not so different from Western countries, with the Trump brand being the starkest example. The Yemeni version of elite profiteering is exemplified in the smuggling of diesel fuel out of the country. Sarah Philips, author of Yemen and the Politics of Permanent Crisis, cites analyses suggesting that 12% of Yemen's GDP is smuggled out, the profits siphoned off by the elite – dollar estimates run as high as $900 million, with reports of a single man from a prominent family taking $155 million in smuggling profits in one year.

As Yemenis watched Israel crush the second Intifada from 2000 on, as well as the invasions and occupations of Afghanistan in 2001 and Iraq in 2003, Saleh's cooperation in the war on terror became ever more unpopular. One prominent scion of the Houthi family, Hussein al-Houthi, led followers in Sa'ada in a famous chant: “God is great, death to America, death to Israel, curse on the Jews, victory to Islam.”

In the chant, "curse on the Jews" stands out from the group of otherwise hyperbolic items seeking victory for one's own side and death to the other. Even before this civil war, the Jewish community in Yemen was very small and long-suffering. Ginny Hill, author of the 2016 book Yemen Endures, found in her travels that “prejudice against the Jews was prevalent and unabashed,” and that Yemeni Jews in Sa'ada and elsewhere have suffered greatly from being caught in the middle of the Houthi insurgency.

Provoked by the Houthi chant and hoping to show his eagerness to fight the war on terror, Saleh sent the army into Sa'ada in 2004. The Houthis fought back. The army killed Hussein al-Houthi, who became a martyr of the Houthis' cause. Six waves of warfare followed over the next seven years, as Saleh's forces kept trying to quell the Houthis, whose power base in the north continued to grow. Saudi Arabia stepped in to support Saleh in 2009, and the Houthis responded with a quick raid from Sa'ada into the Saudi kingdom itself.

Meanwhile, in what had been South Yemen, al Qaeda in the Arab Peninsula (AQAP) was growing as well, and also challenging Saleh's government. President Obama's drone program blasted away in the south, leaving civilian casualties and terror in its wake. Saleh's strategy was to focus on fighting the Houthis and make exaggerated claims that they were sponsored by Iran, while keeping a lighter touch with AQAP, which had more powerful patrons in Yemen's elite.

At the same time, the Saudi royals were escalating their arms purchases, with contracts in the tens of billions with the US (and a $1.5 billion contract with a Canadian company now famous in that country). Saudi oil sales to and arms purchases from the US underpin the unbreakable bond between the kingdom and the empire. It explains why you hear much more about Russian (a competitor in the global arms trade) than Saudi (the greatest and most reliable purchaser of US arms) collusion in the US media. It also explains why the US provides military advice and help with targeting and intelligence to the Saudis as they use all their expensive purchases destroying Yemen.

In 2011, the Arab Spring came to Yemen and an alliance from the elite families joined the mass call for the end of Saleh's rule. Saleh first agreed to step down, then refused. He was injured by a bomb blast in June and went to Saudi Arabia for medical treatment. He finally did step down, handing power over to his vice-president, Hadi, in 2012.

Hadi presided over a constitution-drafting exercise. One feature enraged the Houthis: a plan to redraw the regions of Yemen, making Sana'a and Aden self-governing and merging Sada'a into a new highland governorate, “a formation that would deny the Houthis control over the Red Sea coast to west, cut them off from natural resources to the east, and fence them up against the Saudi border to the north,” as Ginny Hill wrote.

The Houthis, in alliance with the ex-president Saleh, arrived in force in the capital, besieging the presidential palace in 2014 and taking it at the beginning of 2015. Hadi fled to Aden, where he declared that he was still the lawful president of Yemen.

Saudi Arabia began bombing Yemen in support of Hadi in March of 2015. The Saudi intervention magnified the humanitarian impact of the civil war into a full-blown catastrophe, bombing, besieging, and blockading the entire country to try to force the Houthis out.

The Saudi blockade and bombing have scaled up a local power struggle to genocidal proportions. They believe Yemen is their backyard and that it is their right to impose a solution. Military victory has proven elusive for them, but their unlimited resources and the wide license given them by the Western media to freely commit crimes has allowed them to keep raising the stakes and nudging Yemen towards catastrophe.

The Houthis have held on, however, withstanding the bombardment and siege, even as the humanitarian catastrophe continues to expand. By now, the casualty figures are more than 10,000 dead, two million displaced, 2.2 million facing starvation, and one million infected with cholera since 2015 (27% of whom are under 5 years old). In addition to directly helping the Saudi military use its weapons, the US, including the media, has continued to run interference for the Saudi intervention. The humanitarian disaster is presented as a natural disaster, not a direct outcome of the way the Saudi kingdom has pursued the war.

Saleh, a wily operator who had survived in power since 1978, could not survive this last alliance with the Saudis: he was killed within 24 hours of making it. This December 3, Saleh announced he was switching sides, leaving his alliance with the Houthis and joining Hadi and the Saudis. The Houthis quickly routed his forces in the capital and blew up his house. The next day they stopped him at a checkpoint and killed him too, announcing that they had avenged Hussein al-Houthi. Saleh's son Ahmed quickly announced his plans to avenge his father.

The UN, Oman, Iran, and others have put forward peace plans to end the Yemeni civil war. Most feature a national unity government that includes the Houthis, who will convert their movement into a political party, with elections to follow. Saleh switching sides and the Houthi killing him makes a peace deal much less likely in the short term. But the biggest obstacle to peace remains Saudi Arabia, which has also been the biggest escalating force of the war.