Newman says she resigned following a "candid conversation" with John Kelly — sure, okay. 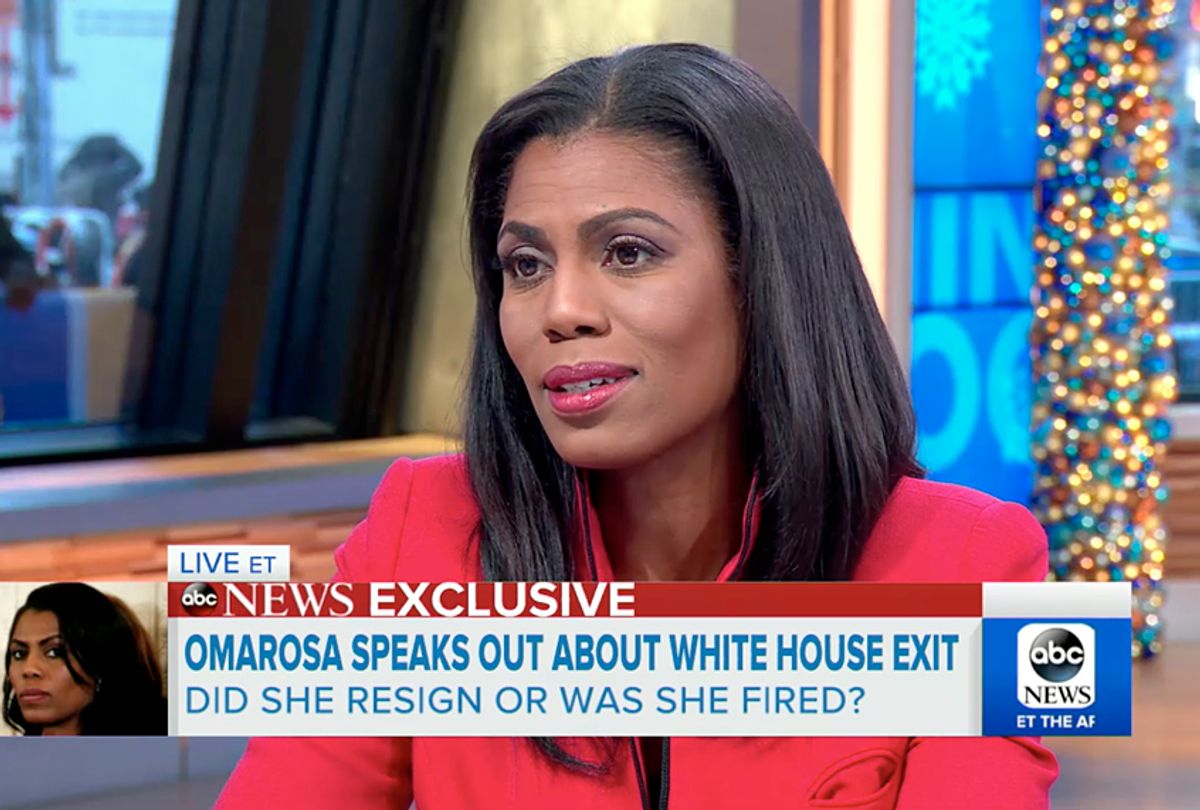 Following a what was reported as dramatic exit from the White House that likely triggered "The Apprentice" nostalgia for many, Omarosa Manigault Newman attempted to explain her side of how has split from President Donald Trump's administration.

"[Chief of Staff] John Kelly and I had a very straightforward discussion about concerns that I had, issues that I raised and, as a result, I resigned," Manigault Newman explained on ABC's "Good Morning America" Thursday.

Manigault Newman denied reports that she had been fired from her job as director of communications at the White House Office of Public Liaison and later escorted off White House grounds.

"I have to tell you that they're 100 percent false," Manigault Newman said of reports that she was fired in a heated tantrum. "And so I have to tell you, completely false, unverified reporting. And John Kelly and I had a very straightforward discussion about concerns that I had, issues that I'd raised, and as a result I resigned."

Manigault Newman claimed she will formally leave the Trump administration on Jan. 20, the one-year mark of the president's inauguration. It's been reported that many in the White House had no idea as to what her actual duties were, but Manigault Newman was still among the highest paid White House advisers, with a salary of $179,700, according to ABC. Other inside gossip pointed to a patter of allegedly unprofessional behavior during her tenure in the administration.

Manigault Newman also claimed the U.S. Secret Service never escorted her off White House grounds, which they confirmed in a tweet. However, the agency did not deny that an escort took place, they only denied having played a role in it.

Manigault Newman also appeared to threaten the Trump administration, by teasing that she has seen things within the White House "that have made me uncomfortable." It's an interesting turn from someone who has been a longtime Trump ally and a staunch supporter of his 2016 campaign and subsequent administration.

"But when I have my story to tell as the only African-American woman in this White House; as a senior staff and assistant to the president," Manigault Newman explained. "I have seen things that have made me uncomfortable, that have upset me, that have affected me deeply and emotionally, that has affected my community and my people. And when I can tell my story, it is a profound story that I know the world will want to hear."

Whether or not she has a "profound story" or better yet, one that she asserts "the world will want to hear" remains to be seen. You'd be forgiven if you think it sounds more like a future book plug, than anything rooted in moral standards.

She continued to insist that she resigned following a "candid conversation" with Kelly, in the White House Situation Room.

Many, however, were pleased to see Manigault Newman depart from the White House, especially with reports that it happened in reality TV fashion — a recurring theme for this administration.

That amazing moment when @RobinRoberts hits Omarosa with the ‘Bye Felicia!’ 😩 pic.twitter.com/gdWDVeStJj