A rumpled Jean-Claude Van Damme parodies himself and the films that made him a star in Amazon's weird, sweet comedy 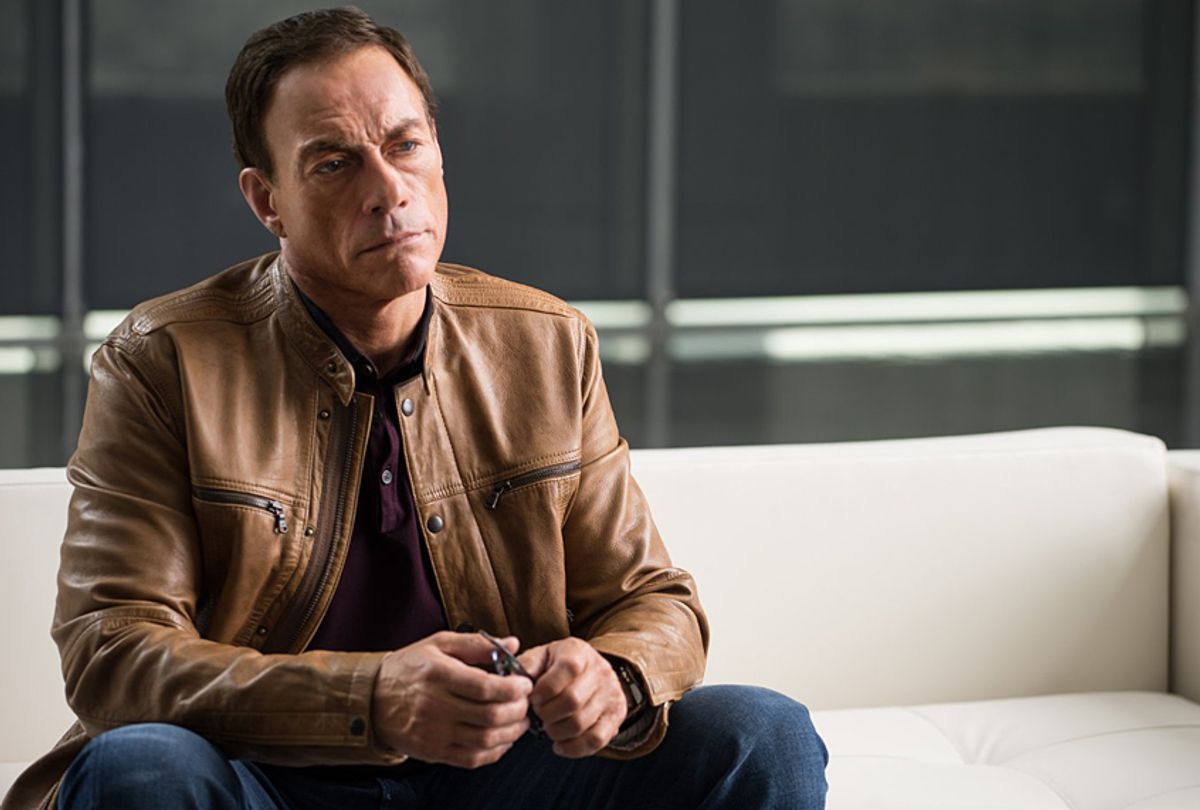 The typical movie fan probably hasn’t spent much time thinking about Jean-Claude Van Damme over the last two decades. Considering the omnipresence of his contemporaries in the ‘80s and ‘90 action blockbuster world — Sylvester Stallone, Arnold Schwarzenegger, even Dolph Lundgren — the fact that Van Damme faded into near-irrelevance is, like his new Amazon series “Jean-Claude Van Johnson,” tragic and a little weird.

An entire generation of filmgoers grew up in the career gap occurring between the era when star of “Time Cop” and “Double Impact” was one of most famous men in the world, and his re-emergence in that 2013 Volvo online ad. You’ve seen it, right? In it, he serenely holds his athletic move between a pair of trucks moving in reverse on a highway as an Enya song lilts in the background. The audacity of the scene resulted in the ad going viral, and within days it had racked up tens of millions of views on YouTube.

If the Muscles from Brussels had concocted a colorful sequence proving that he could still do his signature split after all these years, that would have been something. But the Belgian martial artist is still a superstar at heart, even if his bankability in Hollywood has plummeted in recent years.

Debuting Friday to Prime members, “Jean-Claude Van Johnson” capitalizes these truths while building a lock-tight case as to why we should appreciate Van Damme more than we probably do, starting with the idea that projects his very existence hinging on the star’s willingness to poke fun at himself and own his flaws.  Other action icons cling to their image as unbeatable musclemen who are still kicking ass well into their dotage; “Jean-Claude Van Johnson” opens with Van Damme’s fictionalized self smugly attempting to perform the move that made him famous, failing, and getting wailed in the face.

“Jean-Claude Van Johnson” depicts a fictional version of Van Damme, a rumpled, retired actor mired in ennui despite being surrounded by luxury. Coconut water runs out of every tap in his architectural wonder of a home, and his kitchen cabinet are stuffed to the gills with Pop Tarts.

Alas, the one thing money and faded celebrity cannot buy is true love, something he believed to have found with his former colleague and on-set stylist Vanessa (Kat Foster). So in an attempt to win her back, he emerges from retirement to make his onscreen comeback in an action reimagining of Mark Twain’s “Huckleberry Finn.”

Ridiculous, yes. But that movie, like the rest of Van Damme’s career, is but a cover for his real job as a black-ops agent handled by the very cool and elegant Jane (Phylicia Rashad, clearly having a great time playing a hard-ass), the “M” to Van Damme’s comedic super spy. Unlike Bond, the hero is not immune to the ravages of time or sedentary life, or the pitfalls of ego.

Vanity is one of the many affectations Van Damme and series creator Dave Callaham skewers throughout their nimble and intentionally wacky six-episode comedy. Another is the illogical bombast of the action genre itself, a style of filmmaking that emphasized pyrotechnic overkill in Van Damme’s heyday as well as unrealistic choreography that ensured the hero would emerge from his confrontations with his reputation as an unbeatable killing machine intact.

The true action fan laughs off plot-holes and improbable feats that ignore the laws of physics and common sense, and Callaham winks at that throughout “Jean-Claude Van Johnson” by incorporating a few memorably ludicrous devices from Van Damme’s past hits into the story. A recurring debate throughout the season involves whether Van Damme’s “Time Cop” is better or more plausible than “Looper,” the more recent hit starring Bruce Willis and Joseph Gordon-Leavitt.  Callaham and director Peter Atencio (“Keanu”) take this odd contest, the stuff of late night dorm room blathering, to daft extremes.

As an element of a story that includes a supervillain straight out of Austin Powers, your standard world-conquest plot, and a sidekick with a dark past (Moises Arias), it makes sense in context. As a send-up of a genre whose popularity relies on its fans’ willingness to turn off their inner critic and enjoy the fight scenes, these weird flourishes get a pass. But none of this would work if not for Van Damme’s willingness to commit completely to the lunacy of this enterprise.

Callaham wrote the screenplay for “The Expendables,” a franchise created as an homage to those modern classics and the meaty men who starred in them. His affection for this style of blockbuster is obvious in the outlandish conceit of “Jean-Claude Van Johnson.” Even greater is his clear affection for the actor himself, in his wholeness. And in celebrating who Van Damme was at the peak of his career and who he is after his long fall from grace, about which the actor has been brutally honest, Callaham and Van Damme grant this series a balance of absurdity and gentle earnestness, even allowing it to end on a warm existential note.

It is a strange and wonderful show indeed that can satirize a genre (including staging a few fight scenes using actors who aren’t particularly good at fighting but are loved by the camera) and lampoon its star and his work without betraying the fans of either. But if “Jean-Claude Van Johnson” achieves nothing else, at least it reminds us why Van Damme used to be such a huge star in the first place while making us appreciate that this time, maybe he really is back.