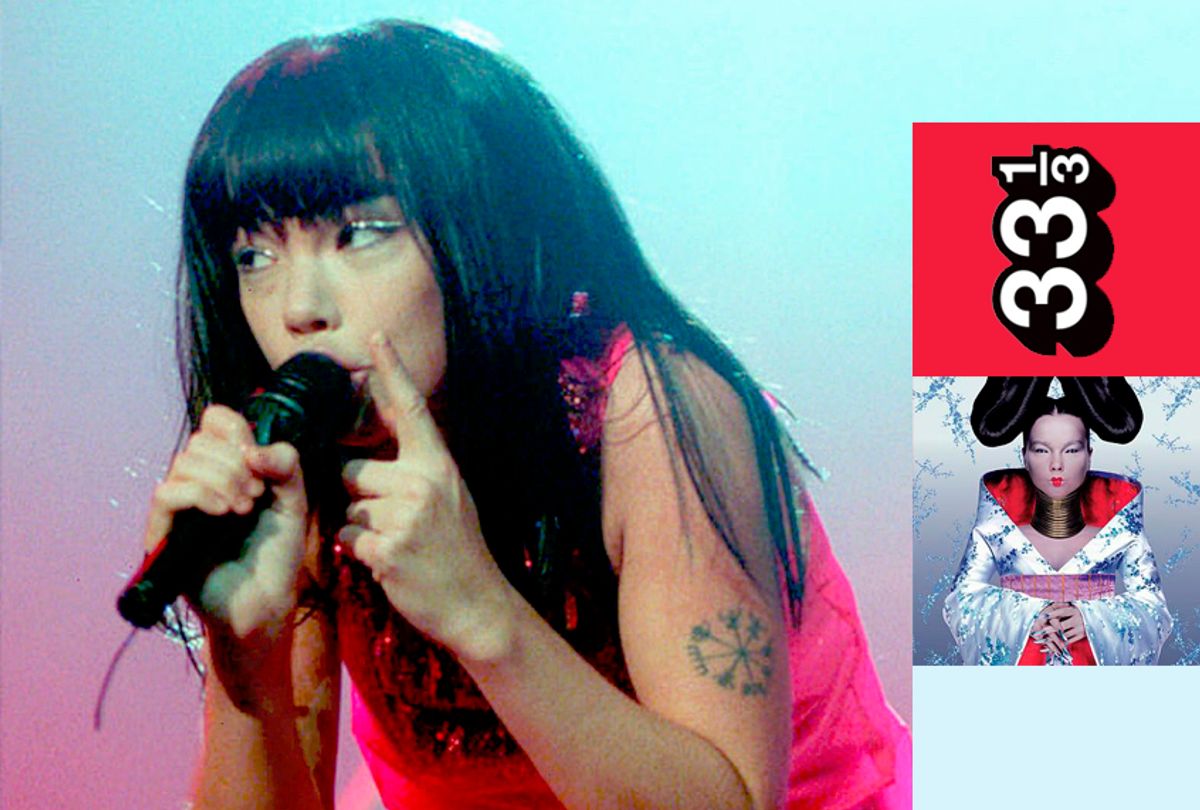 You can track the value that Björk places on group creation over individual ego back to her earliest brushes with fame. When she was 11, her music school had been featured on Icelandic state radio, with Björk singing a cover of "I Love to Love (But My Baby Loves to Dance)" by Tina Charles. The disco romance brimmed with youthful energy, and it proved a hit with the listening public. The young musician was offered a record deal, and her true debut album, "Björk," was released in 1977. Its tracklist featured Icelandic covers of The Beatles’ "The Fool on the Hill" and Syreeta and Stevie Wonder’s "Your Kiss is Sweet," alongside a song written by her stepfather, Sævar Árnason, and "Jóhannes Kjarval," a recorder instrumental written by Björk herself, and named after an Icelandic landscape painter. Björk’s mother, Hildur Rúna Hauksdóttir, a feminist activist and hippyish free-thinker who’d divorced Björk’s father when their daughter was four, designed the sleeve.

Though she’d loved her time in the studio, Björk felt she was being treated as a novelty. Given her restricted musical and visual input, she also felt conflicted about the national fame that this first album brought her—a gold disc, looks in the street, jibes from schoolchildren—because she didn’t feel "Björk" was truly her work. With the proceeds of the album, she bought a piano and began writing more of her own songs, refusing the offer to make a second album with the same team, and rejecting child stardom and the solo spotlight. "I started a punk band when I was twelve," she told Evelyn McDonnell, author of "Army of She," in 1997. Craving the mutual spark of working with people her own age rather than the superficial thrill of novelty fame, punk was a natural escape route. "Everyone was equal. That’s partly why it took me sixteen years to be ready to do my record . . . I’ve worked with a lot of brilliant people who have taught me things."

The band was the all-female Spit and Snot, in which Björk, rather than taking centre-stage, was the drummer, with cropped orange hair and shaved eyebrows. Sadly, none of their work is available to hear, but Björk described their ethos as "girls having fun, and f**k that sitting-around-and-being-cute." (Astin, 1996) When Spit and Snot came to an end, Björk joined the jazz-fusion group Exodus, where she was able to fully indulge her love of unconventional time signatures and experimentation. It wasn’t long, though, before the talented singer was stolen away by Tappi Tíkarrass (which translates as "Cork the bitch’s arse," a variation on an Icelandic phrase for something that fits really well), whose guitarist Eyﬂór Arnalds described the young Björk as a "group person." Tappi were a riotous, infectious, bass-driven post-punk band with complex rhythms and a spiky danceability, a bit like a happier, scrappier Throwing Muses. You can see them in performance in the 1982 documentary "Rokkí Reykjavík"—a film that captures the birth of a specifically Icelandic version of punk, fitted to the problems perceived by the second generation after Iceland gained full independence.

The scene was based on a prolific, can-do creativity across the written word, music and art, and a DIY atmosphere of mutual support. Björk has claimed that, in the late 70s, there were more punk bands per head of population in Iceland than in any other country. Among the more notable groups were Purrkur Pillnikk, Þeyr and Fan Houtens Kókó (whose guitarist, Þór Eldon, was to be Björk’s first big love, her first husband, and the father of her son Sindri). Around this time, Björk also fell in with Medúsa, a collective of surrealist punky poets. Iceland is fiercely proud of its literary heritage, from the epic histories and myths of its medieval sagas and eddas onwards, and the nation’s bookish tendencies gave its take on punk a distinctly arty, intellectual flavour. "The whole punk scene was always poets," Björk recalled. "Between the bands, they would stand there and scream. It wasn’t delicate." (Sjón, ed., 1995)

Screaming poet Sigurjón "Sjón" Sigurdsson, now one of Iceland’s most acclaimed novelists and Björk’s frequent lyrical collaborator, was a leading light in the group, and he and Björk would engage in long, drunken debates about whether art should be based on intellect or instinct. "This is very much her background," he affirms in the documentary "Inside Björk." "Serious, avant-garde art." Serious, but also silly. In 2013, Björk recalled the time that one Medúsa member brought a bottle of absinthe back from Barcelona. The refreshed group then marched to Reykjavík’s hottest club on the top of car roofs, never touching the ground. Bouncers objected to their entering via a window, and then to being bitten in the leg by Sjón. "This brought the police and they handcuffed him, threw him on the floor in the police car, face down. I accompanied him there and held his glasses while he performed André Breton’s surrealist manifesto live in its full length."

Björk’s formative years, then, were all about wild mutual inspiration and the rejection of ego. Her next band, Kukl—a supergroup of Icelandic punk scene alumni—refused to sign autographs, instead berating fans for abasing themselves (Björk still finds fawning fandom uncomfortable). After two well-regarded albums released on Crass’s label, Kukl collapsed under the weight of their own seriousness in 1986. Their anarchist, ironic, intellectual anti-star ethos, and two-thirds of their lineup, were maintained, however, by Björk’s next venture: The Sugarcubes and their record label/publishing company/general art-terrorism organization, Smekkleysa ("Bad Taste," motto: "world domination or death"). The Sugarcubes, designer Paul White remembers, "were very conscious of not allowing anyone to be a star." (White was the director of Me Company, the design agency that designed all The Sugarcubes’, and a large chunk of Björk’s, artwork.) Eventually, though, Björk’s need to express her individual voice, and particularly her love of electronic music, came into conflict with the spirit of solidarity. Creation, for The Sugarcubes, "was very much a democratic process, and that’s why she left—not because she was out of the democracy, but because she was branching out with all sorts of musical ideas that she wanted to do, and the democracy of the band didn’t allow her to do that."