How to resist meaninglessness in this "corporate neoliberal world," according to white nationalists: Blame the Jews 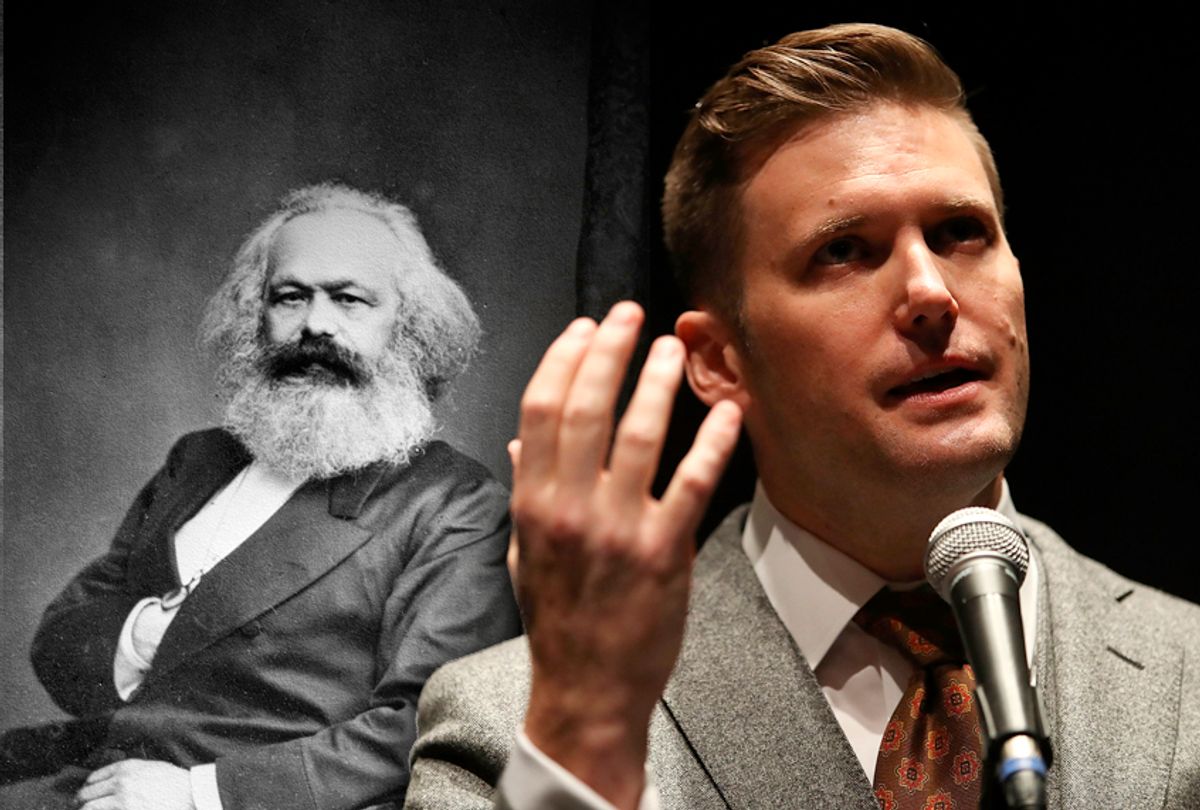 The alt-right is looking to expand its ranks, and prominent leaders of the notorious white supremacist movement apparently believe that leftists are an ideal target for their recruiting efforts. This is according to a recent article in the Nation by Donna Minkowitz, who last month attended a white supremacist conference in Maryland organized by Richard Spencer’s National Policy Institute. Minkowitz reports that leading members of the alt-right are currently strategizing how to appeal to leftists — white male leftists, that is — and their plan is fairly straightforward.

“We need to be explicitly anti-capitalist. There’s no other way forward for our movement,” declared Eli Mosley, one of the panelists at the event and former head of the white supremacist group Identity Evropa. “Twenty-eighteen is going to be the year of leftists joining the white-nationalist movement!” Echoing this sentiment were Mosley's co-panelists, including white supremacist blogger Mike Enoch, whose real surname is Peinovich. "We have to push a right-wing workers’ movement,” he opined, while blasting the culture of capitalism, where “everything” runs the risk of getting “corporatized and capitalized” and “everything is empty and fake.”

“One of the great struggles that everyone has in this corporate neoliberal world is for meaning in their life,” he continued. “Our struggle provides that for us. Everything else is empty … but our movement.”

When it came to identifying the enemy behind this culture of capitalism and corporate neoliberalism, the neo-Nazi panelists revealed their true colors, blaming “Jewish interests” like the fascists of old. “The left will not … name the people behind this … but we can!” proclaimed Enoch. “We can … speak for white Americans who don’t want to sacrifice any more of their children for Jewish wars!”

The alt-right’s “anti-capitalism,” then, is really just anti-Semitism wrapped up in an economic veil, devoid of any real critique of capitalism. Their economic turn is simply a means to further their movement and spread their racist ideology.

Minkowitz attributes this in part to desperation, as the movement has faced many setbacks since the Charlottesville protests last summer, which led to a “public shaming and de-platforming” of the white supremacist activists. At the conference, Mosley (whose real name is Elliott Kline), remarked that they had “almost literally drained the market of libertarians,” who have been the alt-right’s primary targets for their recruiting efforts, and that leftists “are natural activists,” and “a huge resource we can really tap into.”

It is hardly a mystery as to why the alt-right is suddenly adopting anti-capitalist rhetoric; simply put, they see an opportunity. Anti-capitalist sentiments have been growing in America and elsewhere in recent years, and reactionaries like Spencer and Enoch are keenly aware of this fact. They recognize the value of anti-capitalist politics in today’s environment, and see it as a kind of tool to propagate their hateful ideology.

Traditionally, anti-capitalism has been found predominantly on the left, while the right has historically defended the interests of big business (and other forms of hierarchy). But there is a historical precedent for fascists claiming to be anti-capitalist. In his influential work “The Anatomy of Fascism,” political scientist Robert Paxton explored this phenomenon in detail, and his conclusion is edifying for our current situation:

Early fascist movements flaunted their contempt for bourgeois values and for those who wanted only "to earn money, money, filthy money." They attacked "international finance capitalism" almost as loudly as they attacked socialists. Whenever fascist parties acquired power, however, they did nothing to carry out these anticapitalist threats. By contrast, they enforced with the utmost violence and thoroughness their threats against socialism.

Fascists, in other words, were never truly anti-capitalist, and after seizing power they brutally cracked down on labor groups and anti-capitalist activists while aligning with the big industrialists (i.e., the “producers”). The fascist critique of capitalism — if one can even call it that — was never about the economic system itself, but the cultural decay that it had supposedly engendered. The fascists were revolting less against capitalism than they were against liberal modernity (capitalism and modernity are, of course, closely interconnected).

“When they denounced the bourgeoisie, it was for being too flabby and individualistic to make a nation strong, not for robbing workers of the value they added,” Paxton notes. “What they criticized in capitalism was not its exploitation but its materialism, its indifference to the nation, its inability to stir souls.”

Alt-right fascists of today criticize capitalism for the same reasons: the materialism, the cultural liberalism (i.e., immigration, diversity, etc.), the lack of meaning and emptiness in the modern world. They do not, however, criticize capitalism as an economic system, nor do they examine the structural forces that lead to things like inequality and consumerism; instead they blame the “Jewish conspiracy,” along with other scapegoats (people of color, immigrants, foreigners) who are a party to the conspiracy against the white race. Thus, the fascist critique of capitalism is about as inane and incoherent as it is hateful and offensive.

The left does not ignore cultural questions when critiquing capitalism, and leftists are often the sharpest critics of materialism and the shallowness of popular culture; but the cultural effects of capitalism are ultimately seen as a consequence of economic and structural forces, not an “international Jewish conspiracy.”

The far right is well aware of the growing hostility toward capitalism and neoliberalism, and will therefore attempt to exploit anti-capitalist anger in order to spread its racist and authoritarian ideology. The only way it can possibly succeed is if the left fails to put forward its own political project taking on capitalism and standing up to corporate power, allowing fascists to sell themselves as the true opponents of capitalism. Leftists obviously have the advantage when it comes to confronting capitalism, but in this age of neoliberalism, they must remember their anti-capitalist roots.