Censure, don't impeach: It's the right approach on sexual harassment 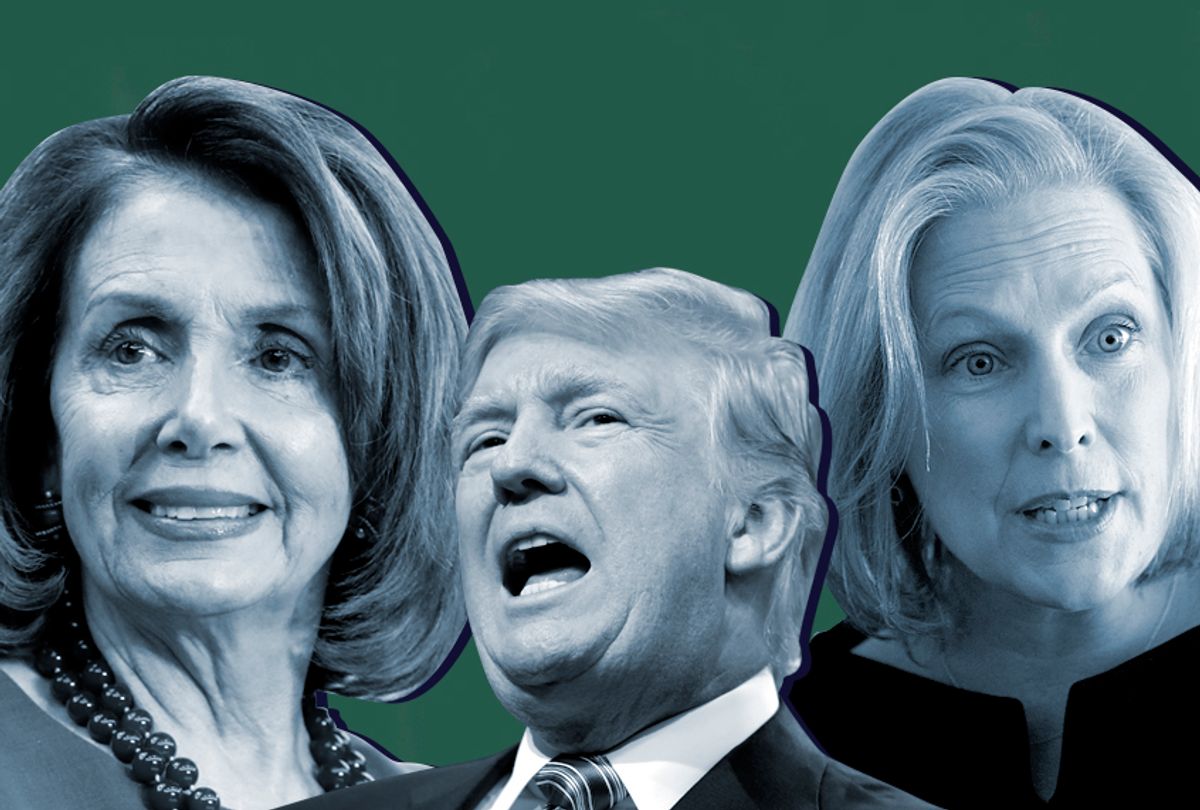 Buoyed by the #MeToo movement, the release of "16 Women and Donald Trump," followed by Megyn Kelly’s interview with three of them — Samantha Holvey, Jessica Leeds and Rachel Crooks — has put the issue of Donald Trump’s sexual harassment, abuse and assault back on the agenda. Holvey was a Miss America contestant in 2006 when Trump walked into her dressing room, Leeds was a traveling sales rep for a paper company when Trump groped her on a plane in the 1970s, and Crooks was a Trump Tower receptionist when Trump kissed her on the mouth in 2005. Collectively, their experiences represent the careless, impulsive, omnipresent nature of Trump’s sexual predation throughout his adult life.

"Believe me, she would not be my first choice. That I can tell you," Trump said last year about Leeds, who’s a grandmother now.

"He didn’t pick me,” Leeds corrected him. “I was there. I was available. He was bored," she told Amy Goodman on "Democracy Now!" Not that harassment is primarily about sex — it’s not. It’s about power, as Trump’s conduct repeatedly reminds us.

Trump’s sense of impervious entitlement was reinforced in a ludicrous White House statement last Monday: "The false claims, totally disputed in most cases by eyewitness accounts, were addressed at length during last year’s campaign, and the American people voiced their judgment by delivering a decisive victory."As ThinkProgress noted, there’s only one supposed eyewitness, Anthony Gilberthorpe, "a serial fabulist with a history of pushing false stories for a few minutes of attention." What’s more, the majority of American voters did not choose Trump — that was their judgment — and in any case an electoral victory does not excuse a politician from scrutiny. Republicans spent the vast majority of Bill Clinton’s time in office rallying their base around this very point.

There have now been calls by six senators for Trump to resign and a formal letter from the Democratic Women’s Working Group, now signed by more than 100 Democratic members of Congress, “requesting that the Committee on Oversight and Government Reform investigate the reports of sexual misconduct raised against President Trump.”

Rep. Elijah Cummings, D-Md., the committee's ranking member, quickly issued a statement supporting the request. “Congress is in the midst of a critical and long-overdue examination of allegations against its own Members — both before and after they were elected to Congress,” he first noted.  “The Oversight Committee is charged with examining similar allegations against Executive Branch employees and the President,” which places the matter squarely in his committee’s lap. “It is extremely hard for Republicans to argue that Congress should ignore these multiple allegations.  They deserve a bipartisan review, and I hope Chairman [Trey] Gowdy will launch an investigation immediately.”

Gowdy, who was previously eager to join the long line of fruitless committee investigations into Benghazi, responded with far less enthusiasm this time, resorting to a claim of "It’s not my job." On the one hand, crimes were not Congress’ job, Gowdy insisted, forwarding a copy of the DWWG’s letter to the Justice Department, although "with the understanding the Department does not have jurisdiction over state law violations." On the other hand, Gowdy said that these allegations "while serious, do not allege violations of specific criminal statues, [and] should be referred to the Judiciary Committee."

Weaselly behavior is perhaps what Gowdy is best known for, but, as noted by Cummings, a majority of the committee could authorize the investigation without the chairman's active leadership — though he would have to allow the matter to come to a vote, “a step he has not allowed in any investigation since he became Chairman.”

If Democrats really want to get serious about investigating Trump’s long history of sexual harassment, abuse and assault, applying pressure first on GOP committee members and then on Gowdy -- tarring him as a protector, defender and enabler of a habitual sexual predator if he continues his obstruction -- is definitely one way to go. It would be entirely justified, in light of the patterns of enabling and protection we’ve already seen in other high-profile cases, especially that of Harvey Weinstein.

But Democrats would be wise to use carrots as well as sticks — or at least a set of softer sticks. A better option might be to take impeachment off the table at the beginning of the process, seeking to censure President Trump instead. That's a way to counter knee-jerk opposition from congressional Republicans, and build a foundation of support for the now-beleaguered minority of GOP party members who want at least some semblance of a return to the world of facts.

A censure process would still bring the truth to light, and significantly weaken Trump’s already diminished power. Admittedly, it would not bring justice for those Trump has abused in the past, but that is likely not an achievable goal. It would surely bring some measure of vindication and help protecting others in the future, which is surely one of the accusers' main motivations.

There are certainly counter-arguments to this, and valid reasons not to take impeachment off the table. When congressional Democrats made that choice during the Iran-Contra scandal it fundamentally crippled their efforts to get to the bottom of things, as independent counsel, Lawrence Walsh, a lifelong Republican, later revealed in his book "Firewall: The Iran-Contra Conspiracy and Cover-Up." But the situation in this case is fundamentally different. The problem is not how to get to the bottom of things but how to get started: How to begin with an orderly, disciplined investigation that will likely lead to no clear resolution.

To guide our thinking on this, another historical example is more relevant. In 1998, when Republicans were out for blood seeking Bill Clinton’s impeachment, MoveOn.org was born. It's original name was “Censure and Move On,” built on this very premise, as co-founder Joan Blades has explained: “We put together a one-sentence petition asking Congress to censure President Clinton and move on to other pressing issues facing the nation.”

For all that’s different between then and now — Clinton’s popularity was the mirror image of Trump’s, for example — three thing remain strikingly similar: First, both men’s transgressions were part of a much broader pattern, which an overly narrow focus can obscure. This included all three GOP House leaders in Clinton’s impeachment — Newt Gingrich, Bob Livingston and Dennis Hastert, though only Livingston was exposed at the time — plus a whole posse of lesser lights, while today it includes figures from every walk of life.

Second, calls for impeachment are politically polarizing in a way calls for censure don't have to be. In the late '90s, MoveOn represented a supermajority position, including Democrats, Republicans and independents, and the same is true today of people who find Trump’s treatment of women deserving of investigation. Third, there’s a profound need for fact-based deliberation on public policy across a wide range of issues, and reframing the most hot-button controversy in a way that enables such a process could help re-establish a framework in which we actually start solving problems again.

Believe me, I think Donald Trump should be impeached, on any number of different grounds for which undisputed evidence is already overwhelming: violating the emoluments clause, obstruction of justice, incapacity to take or fulfill his oath of office, just to name a few. But Trump is president in the first place because of much deeper problems, decades in the making, that urgently need to be addressed. Censure can be a way to start moving in the direction of tackling them.

Right now, the #MeToo movement is a leading indicator of the kind of change that’s needed, but it’s only one facet, however significant and however long overdue. It's far more likely to succeed — in a world-historical, transformational way — through means that strengthen a common ground on which lasting new foundations can be built. As Zephyr Teachout argued in a recent New York Times, “Zero tolerance should go hand in hand with two other things: due process and proportionality.”

That combination brings together the best common threads that our justice system has to help bind us together as a nation of laws, not men, just when Trump’s authoritarian impulses and supporters are pushing us hard in the opposite direction. It’s the best insurance we can provide that the changes we struggle toward now will take deep root and endure, despite whatever backlash will inevitably be raised against them.

Seeking censure, rather than impeachment, in such an overheated political moment would create space for Republicans to rejoin a commitment to reality-based governance, and take their oversight responsibility seriously. This would counter the dynamic of ever-increasing polarization, while still advancing the #MeToo movement's goals by officially acting on the accusations that have been brought. It might finally enable a true fact-based accounting of Donald Trump's misdeeds, something he has successfully avoided for his entire career.

I’m not naïve. None of this guarantees anything in the way of a positive outcome. But it advances opportunities that are now largely absent. I hardly expect congressional Republicans to trip over themselves rushing to censure Trump, for example. But with 70 percent of Americans saying Congress should investigate accusations of sexual harassment against the president, according to a recent Quinnipiac poll, public pressure could readily be mobilized against them.

Nearly four in 10 Republicans agreed, and if impeachment were off the table, that could become the majority GOP position as well. At the very least, the course of seeking censure rather than impeachment creates a principled meeting ground — in contrast to most political compromises, which have little in the way of principle to justify them.

What matters most, ultimately, is what happens on that principled meeting ground. First and foremost, Trump’s accusers will have their stories heard as they deserve to be. Trump’s mendacious excuses will surely be exposed as well. He’s had every opportunity to provide credible responses, and changing the subject, one way or another, is the only thing he seems to have going for him. That wouldn't work this time. The absence of Trump’s imaginary witnesses will become painfully obvious, even to his would-be supporters. Broader questions of character, brought sharply into focus in the process, will shed a revealing light across the full spectrum of this issue in American politics today.

In short, the seeming weakness of censure as a punishment should be compensated for by the power of what occurs in the process, and the potential it has to alter American politics and culture in fundamental ways.  It is, in a sense, a shining example of the strength of soft power, something for which Trump has nothing but contempt. It is the path that Democrats should take — not just for their own sake, but for America’s.