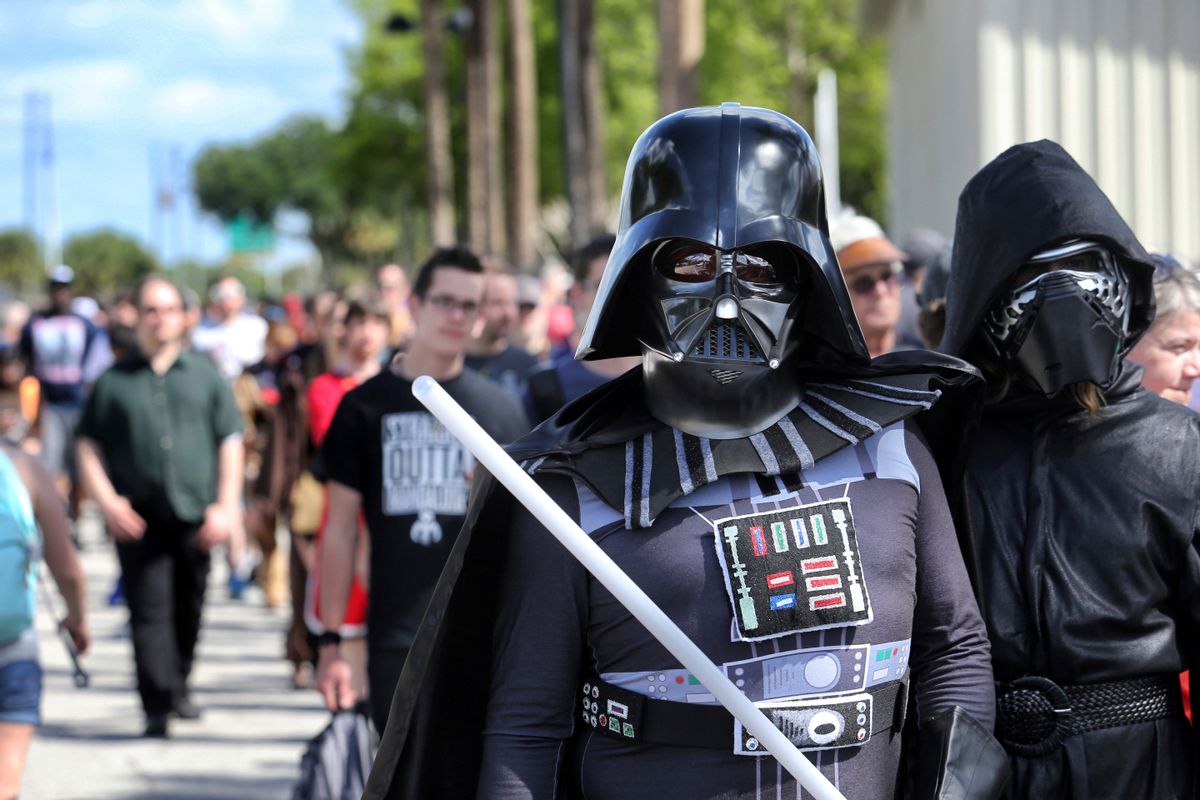 With the latest film in the Star Wars saga, The Last Jedi, in cinemas, it got me thinking about lightsabers — the iconic weapon of Jedi and Sith alike. Despite their name, these glowing blades would in fact be made of the stuff I research — a soup of charged particles called “plasma”. This is sometimes known as the “fourth state of matter” in addition to solids, liquids and gases.

As I’ve previously shown, real-life lightsabers would theoretically be possible, though horrendously impractical and somewhat beyond our current technological capabilities. Essentially, glowing hot plasma could be shaped into a blade by using strong magnets in much the same way we do for current nuclear fusion reactor experiments.

The downside would be lightsaber battles. A fundamental plasma physics process called magnetic reconnection would be unavoidable when two blades got close enough to clash. The entire pattern of the magnetic field lines would change, explosively releasing all the hot plasma contained in both lightsabers. The likely result is that both you and your opponent would have body parts vaporized in a single clash.

Something of a disappointment. And so I wondered whether the lightsaber would be up to the task against a different form of attack from the films — lightning. The earlier films showed us that lightsabers seem to absorb or block “force lightning” attacks, but would the same happen for a lightsaber that obeys the laws of physics?

Thunder and lightning have been the subject of speculation and scientific inquiry for at least 2,500 years. Ancient Greek philosopher Empedocles thought that the sun’s rays hitting clouds caused fires which would quickly drive out air causing a noise, thunder, and a gleam, lightning. It wasn’t until some 2,000 years later that the discovery of electric charges started to reveal the true, but incredibly complex, nature of the phenomenon that scientists are still investigating to this day.

Despite the fact that we still have a lot to learn about lightning and its many forms, there is a general consensus surrounding some of the basic concepts of how and why it occurs. The conditions in storm clouds lead to an updraft carrying light ice crystals which then collide with hail suspended in the clouds. These collisions result in static electric charges, which build up at the top and bottom of the cloud.

Thunder clouds are actually incredibly tall, around 10km, so the bottom of a cloud is actually closer to the ground than to the top of it. This means an electric field builds up in the air between the ground and the cloud. Normally, air, being a gas, is a pretty poor conductor of electricity — meaning currents aren’t able to flow through it. However, when the electric fields get large enough they can knock electrons off the air molecules, forming channels of plasma.

Plasmas, unlike gases, are great conductors of electricity — in fact, many laboratory plasmas are comparable with most metals in this regard. This is because plasmas contain loose electrons (negatively charged) and atoms that have lost electrons (positively charged). It’s the much lighter electrons which really allow electricity to flow within a plasma.

The flash of lightning occurs when a plasma channel connects the ground to the cloud, allowing huge currents to flow which superheat the air causing it to glow and emitting an audible shockwave or thunder. This all happens incredibly quickly though, typically lasting about 30 microseconds.

But, if lightsabers are also made of plasma, that would make them fantastic conductors of electricity, too. Just like the lightning rods on buildings, a lightsaber would provide a low resistance path for electrical currents to flow to the ground — making them far more likely to be struck by lightning than anything in the surrounding area.

However, the easiest way for that current to flow to the ground after it hits the plasma blade would be to travel through your body, which is a fairly good conductor too. So a wielder of a real-life lightsaber would be prone to direct lightning hits and therefore subject to severe burns, burst blood vessels and potential cardiac arrest.

Given that in one of the latest trailers Rey is shown wielding a lightsaber during a rainstorm, I’m worried she might not survive to the end of the film.