Our bully nation long preceded Trump; in fact, it created him and helps explain his rise to power 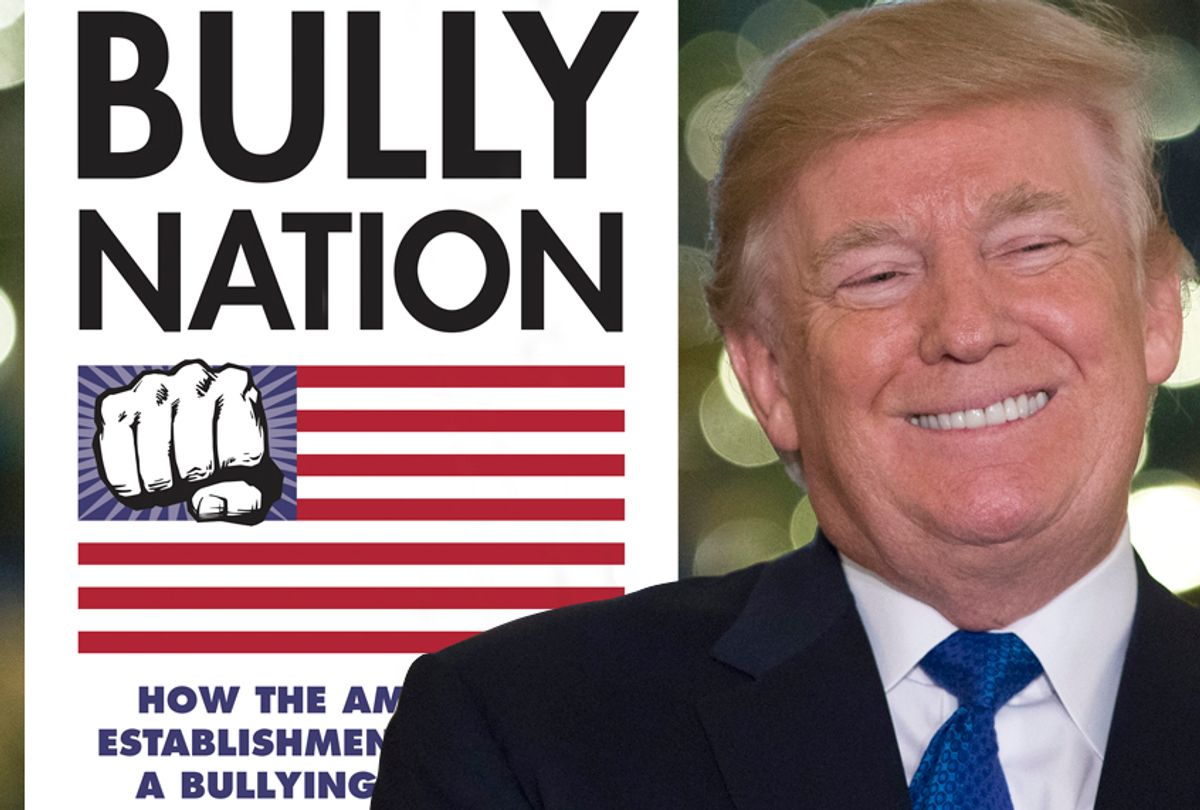 The following passage is excerpted from "Bully Nation: How the American Establishment Creates a Bullying Society," by Charles Derber and Yale R. Magrass. Originally published in April 2016, the recently revised paperback edition has been updated to reflect on Trump's ascent to power. Published by University Press of Kansas; reprinted with permission.

Bullying has been a means of controlling people by putting them in "their place” perhaps for as long as there have been humans. We live in militaristic capitalism. Capitalism is bullying; it is a competition with winners and losers. Militarism is also bullying: violence, aggression, and submission to authority. Militaristic capitalism combines two bullying principles, which multiplies their effect. The United States openly views itself as the world police force, a benign hegemon morally ordained to impose its interests and values on the rest of the world and justified in the name of freedom, human rights, and antiterrorism to do whatever it wants to weaker countries. The United States spends more on weapons than its ten largest competitors combined.

America makes heroes of bomber pilots like John McCain and offers them as role models for children and adolescents. They see the media applaud the bullying behavior of their own government, which dispatches police, soldiers, and FBI and CIA agents to foreign nations to kill and wreak havoc—from Afghanistan to Somalia to Colombia. If you kill enough, whether in a just war or not, you may win the Congressional Medal of Honor. If bullying brings esteem to a nation, then surely that is behavior to strive for. Potential recruits for an aggressive military need to be immunized against scruples over violence and bullying. This becomes an implicit part of their education, whether or not it is ever publicly admitted. Accordingly, schools and adult authorities often turn a blind eye toward bullying. After two world wars, the US Army lamented that a majority of combat soldiers never fired a weapon. To correct this "mistake," the army called for a change in the training of soldiers and the education and upbringing of children. By that measure, they have been successful. In Vietnam, Iraq and Afghanistan, the majority of combat soldiers killed.

The most vicious bully of all is the militaristic capitalist system itself, which requires bullying by people in power, regardless of their individual personalities. Most people would not see Barack Obama as someone with a particularly bullying personality, yet his role as president of the United States required him to promise "so long as I'm commander in chief, we will sustain the strongest military the world has ever known.” As president, he attacked Afghanistan, Iraq, Syria, Libya, Yemen, Somalia, and Pakistan, often sending in US Navy SEALs and the US Army Delta Force. During his last year in office, he dropped 26,171 bombs. He deported over 2.5 million people, more than all other presidents combined. Yet Donald Trump embodies most people's image of a bully. With his insults, put-downs, and even violent threats, he looks like an oversized, overaged schoolyard bully.

Why was Trump so popular during the election, at least in some circles? Although they are brutal and cruel, bullies are often admired. Like a schoolyard bully, Trump, both as a politician and long before he entered politics, called anyone who challenged him a loser. With that vocabulary, he perpetuates the idea that victims are weak and lazy and don't have the gumption to prevail. They deserve their fate and must submit to the triumphant. As a landlord, Trump brutally intimidated his tenants—cutting heat and hot water, refusing to maintain and repair his sometimes rat-infested buildings—in the hope of driving them out of rent-controlled apartments that he planned to convert into condominiums. When Trump hosted his reality show, “The Apprentice,” people cheered when he announced, "You're fired!”

In a time of anxiety, when wages have been stagnant for decades, when white males fear their status being threatened by women and people of color, when citizens of Vietnam, Iraq, and Afghanistan can defy the United States, some may feel a need for a protector who will "make America great again.” By"great." Trump meant that America must feel free to exercise control over and forcefully administer its values upon any other country in the world, with impunity, Nobody can be allowed to mess with America. A strongman, a bully, is needed; to protect you, he must make sure no one can challenge him—he must be able to destroy you. The more effectively the bully bullies, the more secure you will feel. You can even feel empowered in his glow as you can become part of the dominant caste, the winning team. Personally, your life may not be great, but at least you can be part of something great—the world bully.

The mainstream media and party establishments say, "Isn't it terrible that Trump is such a bully?” Many ordinary people say the same thing, but Trump's bullying is a deep part of US culture. If we look honestly in the mirror, we will likely see some reflection of Trump. This is especially true of the political and media establishments who present themselves as being civil and anything but bullies. The inconvenient truth is that bullying is embedded in American culture through its governing elites and most powerful institutions: the military, the corporation, and the state. Whatever our personal values, we all live in a bullying society—militaristic capitalism—and must learn to play by its rules.

When he campaigned for president, Trump behaved just like a schoolyard bully, and he continues to do so in the White House. He threatened that his opponents would face riots, as he egged on supporters to punch out protesters at his rallies. Before he won the GOP nomination, some of his hard-core supporters made death threats to wavering Republican delegates. As president, he warned that in a confrontation, North Korea "will be met with fire, fury and frankly power the likes of which this world has never seen before.” His bullying actions surpassed his words as he dropped the Mother of All Bombs—the never-before-used, largest nonnuclear weapon in America's arsenal—on Afghanistan. Domestically, he showed no hesitation denying health insurance to 22 million people, as he promised "political problems” for Republicans who did not follow his agenda. Such blatant actions are dangerous to the establishment because they have threatened to expose the disguised bullying built into the Republican Party and the kind of capitalism and militarism it endorses.

The Republican Party's neoconservative establishment—and much of the Democratic Party's leadership—embraces a global militarism that threatens and bullies all nations opposing US interests. The party embraces an unfettered neoliberal capitalism with few restraints on corporations that bully workers and consumers. But these policies are packaged in moral ideals about preserving freedom and American exceptionalism. High-flown rhetoric hides the GOP establishment's underlying commitment to institutionalized bullying. Although Trump preaches many of the same moral values, with a pledge to "make America great again,” he has been embarrassingly explicit in his embrace of xenophobia, nativism, and even torture.

It is crucial to elites that their bullying be disguised as a legitimate practice that serves beneficent purposes. Faith in their rule can be maintained only if most of the population sees national militarism and corporate power not as bullying but as "moral intervention” in the case of the military and "protecting the good or efficient operation of the market” in the case of capitalism. Common wisdom holds that Trump's bullying power is attractive only to his downwardly mobile and authoritarian white working-class male supporters. But when he makes bullying statements or threats toward women, people with disabilities, LGBT people, people of color, Muslims, and whole countries, such as China and Mexico, he is saying what many within the elite — and many ordinary citizens — really think but are hesitant to say publicly.

Many Americans, though, have begun to embrace an antibullying culture. This counterculture is particularly strong among groups-such as women, LGBT people, and people of color—who are frequently subject to systemic bullying. Many teachers at all levels of the education system endorse the antibullying culture and critique bullying's authoritarian undertones. But even these Americans still have to live in the existing system and must abide by its rules. Generals and soldiers alike have to embrace the bullying code of the military and learn to view state violence as "moral heroism.” Likewise, workers and managers seeking to survive and succeed in a corporate culture—and even supervisors in schools—cannot be sentimental about the use and abuse of power. Threats to workers, competitors, and colleagues are part of the game, and those who can't live by bullying often lose out.

Trump is so extreme that the majority may never vote for him, but he was able to win the presidency by galvanizing a critical mass. Polls showed that working-class voters in Ohio, Wisconsin, Michigan, and Pennsylvania who proved crucial to his victory in the election embraced his "pugnacious personality.” This, more than his policies, may explain his rise to the presidency. His main attraction to voters may be a barely concealed recognition and admiration of how he is openly playing out a hidden code of bullying embedded deep in our culture and our dominant national institutions. Even with a different president, the nation will be in danger of "Trumpism” until we change the system that the establishment runs. We need to build a new, more democratic economy, end militarism, and reject the authoritarianism of a bullying culture. Trumpism is just the visible tip of the bullying that drives our core institutions and culture. Through his unvarnished bullying, Trump inadvertently reveals the "civil bullying" built into America's national institutions and everyday life. When citizens and pundits ask why such a bully has won so much power and so many votes, it can open up a discussion about the real nature and roots of bullying.

Bullying enhances the ideology that the strong are strong, the weak are weak, and each deserves to be where they are. This attitude pervades America's culture, government, military, corporations, media, schools, entertainment industry, athletics, and everyday life. The first step to a solution is to shift the conversation to institutional bullying, then move beyond a simple therapeutic narrative to a political one aiming toward transformative social change. No matter who sits in the White House, and as long as the United States embraces militarism and aggressive capitalism, systemic bullying and all its effects—abroad and at home—will persist.

Charles Derber is a life-long activist, public speaker and the author of over 20 books. His latest book is "Welcome to the Revolution: Universalizing Democracy for Social Justice in Perilous Times" (Routledge, August 2017, paperback).