I'm a Christian and I resist: Roy Moore and his ilk don't speak for all of us

Despite what you might think you know about Christians, our long tradition of resistance is making a big comeback 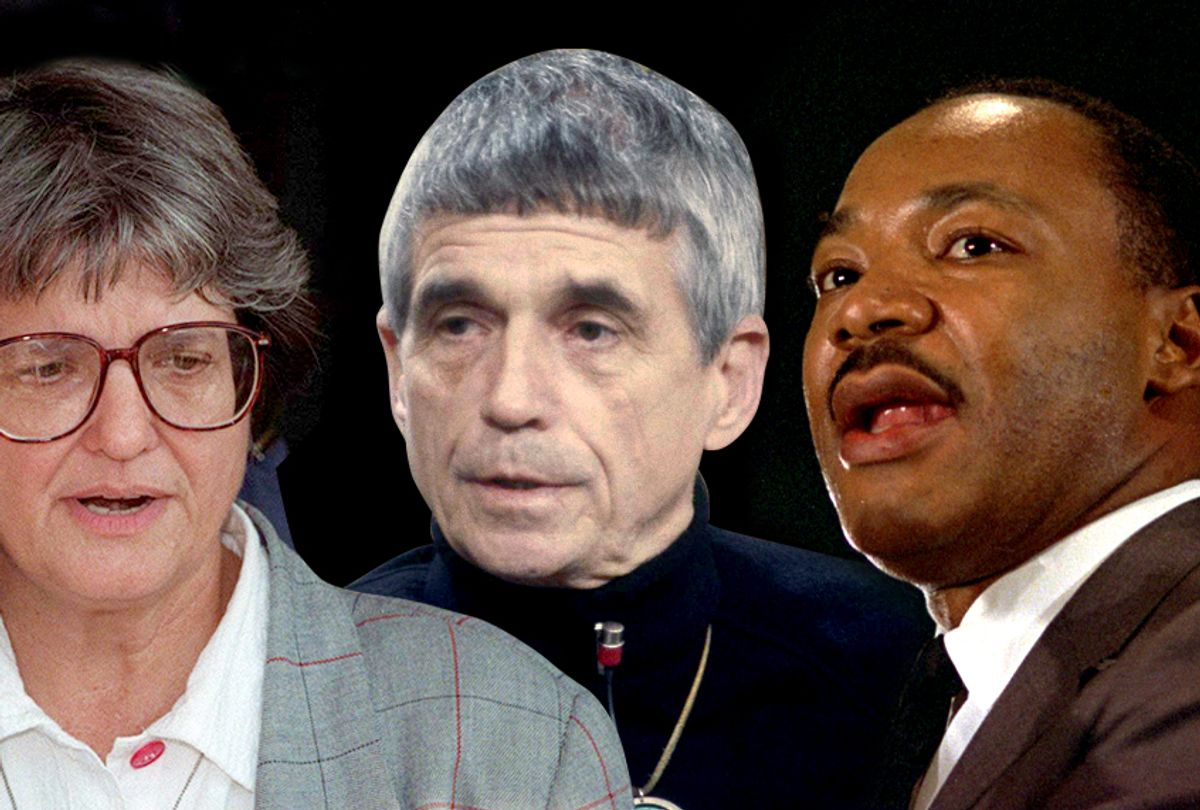 As a Christian, I won’t ask you if you’ve “heard the Good News” about Jesus Christ. I’m not likely to go door to door handing out pamphlets espousing the transformative power of the gospel. I promise you I will never, ever non-ironically tweet or post anything that concludes with #blessed, or offer only "thoughts and prayers" in your hour of need. But, yes, I’m what you would call a churchy type, having gone back to church after swearing it off as a teenager, a development that I thought meant relatively little in the grand scheme of things, until the political hell-ride accelerated by the election of Donald Trump made me realize that it meant everything.

Many people outside the church believe that American Christians are typified by those dominating the headlines: mall-cruising perv (and failed Alabama senatorial candidate) Judge Roy Moore, whose documented fixation on teenage girls was supported by his colleague, Alabama State Auditor Jim Zeigler, who commented, “Take Joseph and Mary. Mary was a teenager and Joseph was an adult carpenter. They became parents of Jesus”; Kim Davis, the Kentucky county clerk who would rather break the law and violate the terms of her employment than issue a marriage license to a same-gender couple; Jack Phillips, owner of Colorado’s Masterpiece Cakeshop, whose refusal, on religious grounds, to bake a cake for a gay wedding predicated a Supreme Court case; and scores of evangelical religious leaders who preach purity, decency and accountability yet line up behind Trump, from whom, it seems, there’s a new egregious moral affront every day — from reports of his vulgar, misogynist remarks about women that surfaced during the 2016 presidential campaign to his complete and utter disregard for the plight of Puerto Rico in the wake of Hurricane Maria to his antagonism toward immigrants to his consistent efforts to gut the Affordable Care Act, which would leave millions of Americans without adequate medical coverage.

That’s not the whole story. In the age of Trump, the Christian social justice movement has been galvanized. Purveyors of Christian conservative extremity are equally matched in ferocity of belief — if not in terms of media exposure — by progressive clergy and laypeople whose activism rests upon the teachings of Jesus: The stranger is welcomed, the weak are protected, the least of these are centered, and love is love is love. As with Dr. Martin Luther King Jr., anti-war cleric Rev. Daniel Berrigan and death-penalty repeal activist Sister Helen Prejean before them, their activism is forged in the fires of faith.

“The progressive religious left is organizing and mobilizing as we have been way before Trump and as we will continue to do after Trump,” says activist and journalist Eliel Cruz Lopez, a Christian amplifying the religiosity of LGBT people through his “Faithfully LGBT” social media campaign.

“But this era is pushing many of us to double our efforts and be made known as people of faith who oppose this regression on various social justice issues.”

Trust: A person who believes in the Good Book can be a badass. The Christian Resistance is real and 2017 was its year.

One of the most poignant images of 2017 depicts clergy members kneeling on concrete in front of the Capitol building in Washington, washing the feet of young immigrants whose temporary relief from deportation has been imperiled by Trump’s impending repeal of DACA (Deferred Action for Childhood Arrivals), a federal program that shelters the children of undocumented immigrants. Washing feet is an ancient Christian ritual of acceptance and caretaking, reminding us that Jesus washed the feet of his disciples the night of the Last Supper.

Immigration is a key concern to Christian resisters, and that should be no surprise: The Bible itself is one big anthology of immigration histories, filled with people journeying, literally and metaphorically, to a better life — from Mary and Joseph seeking refuge in the manger, to baby Moses in his basket hidden among the Nile River reeds, to Abraham journeying from his homeland to Canaan. Jesus delivered some of his sternest Biblical beat-downs around migrants and refugees — including saying he would come in judgment against those who deny justice to the foreigner.

More than 800 churches around the country have offered sanctuary to immigrants at risk of deportation; Think Progress compiled a list of more than two dozen faith groups, the majority of them Christian, issuing statements opposing the dissolution of DACA; and at New York’s Riverside Church last February, clergy gathered to read aloud every verse of scripture that addressed immigration. When social justice shows up at the altar, it fills me with the most precious of commodities: hope.

Christian faith can be a comfort, but living it is not always comfortable. I'm awed by the Christian pastors and other religious leaders who led the counter-protest at the Charlottesville white supremacist rally, after having been held for hours in a local church the night before as neo-Nazis marched into the area, bearing torches and chanting “Jews will not replace us” and “White Lives Matter.” I sure don't have the guts of avowed Christian Bree Newsome, who shinnied to the top of a flagpole to pull down the Confederate flag in front of a South Carolina courthouse in 2015, or quarterback Colin Kaepernick, who recalled the prayerful posture of Dr. King by taking a knee during the national anthem to protest police violence against African-Americans.

I don’t know that I’d even have the nerve to step into the spotlight like my sweet, shy friend, Rob Lee IV, the 24-year-old minister and descendant of Confederate Gen. Robert E. Lee, who accepted an invitation to the 2017 MTV Video Music Awards to introduce Susan Bro, the mother of Heather Heyer, the young protester who was killed during the Charlottesville protest. But conviction must overtake self-consciousness with racial equality at stake. James 2:14-26 says, “Faith without works is dead.” Or as Rob himself said that night, “It is my moral duty to speak out against racism, America’s original sin.”

While male theologians of the Christian Resistance like Rev. Dr. William Barber have garnered the lion’s share of mainstream media attention, a large number of female faith leaders have become superstars of social media, tweeting their way to prominence in the public conversation: Jen Hatmaker, Glennon Doyle, Anne Lamott, Rachel Held Evans, Austin Channing, Dr. Yolanda Pierce and Revs. Traci Blackmon, Jes Kast and Nadia Bolz Weber. Through their concision, passion and wit, these women show that some of today’s most powerful testimony isn’t taking place in church, but online.

Hatmaker, Doyle, Lamott, Evans and Bolz Weber are also best-selling authors who are unafraid to reveal the stumbles in their respective faith journeys — addiction, doubt, anger, despair. Their relatability amplifies their influence, as flawed fellow travelers who aren’t holier-than-thou, but rather, just like you. Hot-mess ministry is a thing, and I’m here for it. These writers and their willingness to be seen as flawed — sometimes cursing, often struggling, but ever-trying — has done more than anything else to draw me back to my Christian roots. They’ve shown me, by risking the vulnerability of being wholly seen, that spiritual growth is a process, not a performance.

After years of working as a writer who withheld any opinion on religion, I took a risk and veered “off-brand” into faith writing, with a recently published book, "Grace for Amateurs," about my return to the pew. I learned that given my LGBTQ-affirming stance, certain Christian bookstores refused to stock the book. Similarly, pastor and writer Jen Hatmaker, who built a huge evangelical fanbase through her books and beguiling social media presence, was roasted thoroughly in the conservative Christian blogosphere for coming forward in acceptance of gay marriage. LifeWay, a large Christian bookstore chain, stopped stocking her books once she made her LGBT-affirming view public.

Jesuit priest James Martin, author of "Building a Bridge: How the Catholic Church and the LGBT Community can Enter into a Relationship of Respect, Compassion, and Sensitivity," a book urging Christians to love and show compassion to LGBTQ people (and vice versa), was the target of what he calls “alt-right Catholics,” some of whom called him a heretic and said he should be removed from the priesthood. The backlash led to the postponement or cancellation of a  number of his speaking engagements.

Christians who take a strong stand on social justice issues — often framed as “liberal,” when in actuality they are simply Biblical — are often exhorted by other followers to “leave the politics out of it.” But to do that is to ignore the moral imperative that religion houses at its core. Ethics are where the rubber meets the road in religious life, and as much of a conflict-averse weenie as I am, I have to speak out for equality, even though there might be consequences. (Due to the negative reaction within Rob Lee’s own congregation after his appearance on MTV, he resigned his position as pastor at Bethany United Church of Christ in Winston-Salem, North Carolina.) Knowing that hostile opposition is a possibility, even from other Christians, is it worth the risk for me come forward in my faith? Yes.

Christians are urged to build bridges, not walls. So we must live in the tension of putting up a righteous fight against those whose views we oppose — while holding the truth that ultimately, we are one. As priorities go, that is lovely, if a bit jargony, not to mention hard to live up to at times. We can love others — in that broad, Jesus-y way — while we vociferously object to their actions. John 14:2 says, “My father’s house has many rooms.” But I sometimes wonder: Can’t God lock Trump and his ilk in one of them for an extended timeout? I’m forced to remember that we are all worthy in God’s sight, which is possibly the most annoying aspect of my faith. The Trump presidency has been a trial. I’m fairly certain that at this point, my body composition is 98 percent rage.

The recent elections in Alabama and Virginia brought some encouraging Democratic victories, but there are miles to go before we sleep — after all, Salmon Voldemort still holds the highest office in the land. This year has seen a tremendous resurgence in the visibility and impact of progressive people of faith, yet the work must continue. Like my Christian cohort, I’m not in this fight for an express ride to heaven, spiritual brownie points or even a White Liberal cookie. I’m in this because Right vs. Wrong is a story as old as time, a story that has always persisted. We believe, we follow Jesus, and we fight. Because Jesus himself? He resisted.