Death of a legislator: Dan Johnson's suicide and the GOP's far-right drift

Before facing abuse allegations and taking his own life, Kentucky Rep. Dan Johnson was becoming a far-right leader 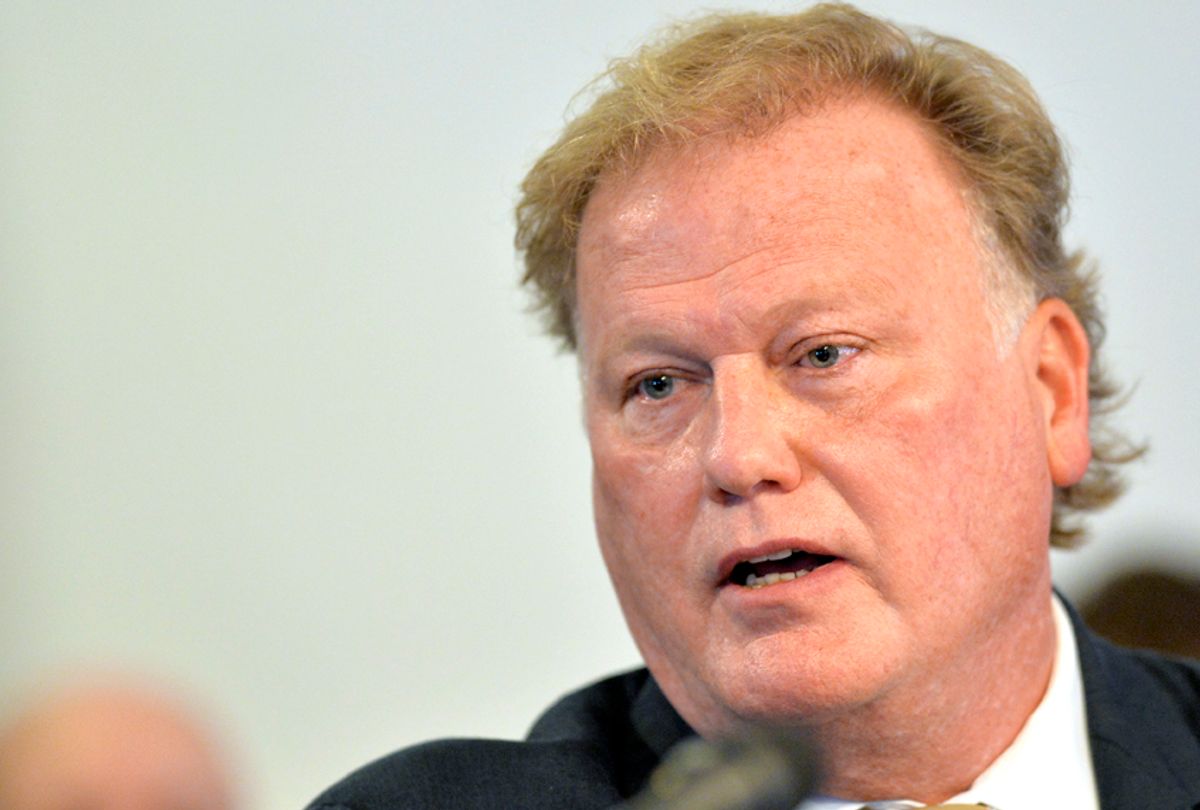 While the national press is focused on how the #MeToo movement is affecting Congress, state and city governments have also experienced a surge of women accusing politicians of sexual harassment and abuse. Kentucky has been especially shaken by this, with at least four Republican state legislators and a Democratic city councilman being publicly accused of sexual harassment in the past couple of months.

But the story took a particularly gruesome twist after a fifth statehouse Republican, Kentucky state Rep. Dan Johnson, took his own life last Wednesday. That came shortly after the Kentucky Center for Investigative Reporting published a blockbuster exposé of Johnson's disturbing history, including allegations that he molested a 17-year-old member of his Heart of Fire congregation, where he was a minister.

This entire sordid affair is already being twisted by conservative pundits to discredit the #MeToo movement. Kathleen Parker asks whether Johnson had "a right to some sort of dispassionate hearing," ignoring the fact that the alleged victim went to the police, to no avail. A deeper look into Johnson's career, however, suggests a different moral: It illustrates the growing problem of radical fundamentalists quietly infiltrating local state governments.

Roy Moore may have lost his chance to be the U.S. senator from Alabama -- if by an agonizingly narrow margin. But dozens of mini-Moores are flourishing in state legislatures, where they are pushing the Republican Party ever further to the right and quietly working to dismantle women's access to reproductive health care.

While the molestation allegations against Johnson have been the focus, R.G. Dunlop and Jacob Ryan of the Kentucky Center for Investigative Reporting also uncovered a dizzying amount of disturbing information about Johnson that should have been disqualifying long before those accusations came to light. The man was a con artist who told lies about his own biography so outrageous they hardly needed fact-checking. He had repeatedly been in trouble with the law for running an illegal bar out of his church, and over several apparent arson incidents. During the 2016 election, he posted racist memes portraying Barack and Michelle Obama as monkeys and won his election over Democrat Linda Belcher anyway.

“I think that led him to believe there were lots of things he could do, yet his folks would still support him," Marcie Crim, executive director of the Kentucky Health Justice Network, told Salon.

When his Republicans colleagues came under fire in November for sexual harassment allegations, Johnson took to Facebook to offer a defense, writing, "I'm totally against anything that has to do with abuse, however there are no perfect people."

Crim was not surprised by this, saying that both sexual abuse and anti-choice beliefs stem from an unwillingness to "believe that women’s bodies belong to the women." Essentially, she said, right-wing men want to touch women "whenever they want, and they also want to tell them what kind of health care they can and can’t get access to."

Johnson wasn't just anti-abortion, which is par for the course in Republican politics. He was a radical anti-choice fanatic. He appears to have been closely working with Operation Save America, an extremist Christian organization that pushes what it calls the "doctrine of the lesser magistrates," which holds that Christians shouldn't obey laws that they believe conflict with God's laws. It's the same theory used to bolster the case of Kim Davis, the Kentucky clerk who refused to sign marriage licenses for same-sex couples. Now it is being used to argue that federal laws protecting abortion rights need not be respected.

In October, Johnson pre-filed a piece of planned legislation called the Abolition of Abortion Act, which would have criminalized abortion in Kentucky both for doctors and patients. The proposed bill explicitly instructed the state to enforce this ban "regardless of any contrary or conflicting state or federal laws, administrative regulations, executive orders, or judicial decisions." It appears Johnson was trying to put this "lesser magistrate" notion into law.

In an emotional video released before Johnson committed suicide -- but after the allegations of sexual misconduct had emerged -- Rusty Thomas, the head of Operation Save America, blamed the "sexual revolution" for sexual harassment, saying, "God is lifting the skirt of our national whoredoms."

Thomas went on to defend both Johnson and Roy Moore, saying that the "establishment will spend millions of dollars to dig up dirt" and that it has "successfully weaponized sex as a political weapon" to publicly shame those "seeking to stand for righteousness and for godliness in our nation."

Thomas, it's worth noting, spends his days organizing protests outside abortion clinics that are meant to publicly shame women seeking abortion. Johnson himself showed up at one of these protests and was photographed by clinic escorts.

In the video, Thomas calls Johnson "the congressman we have been working with to introduce a bill of abolitions." This comports with what Rewire reporter Jenn Stanley discovered while working on her audio documentary "Marching Toward Gilead." She called Johnson to ask him about his anti-abortion bill, and he had Joseph Spurgeon, a pastor who works with Operation Save America, call her back within seconds.

"I didn’t tell Dan Johnson that this was a story about Operation Save America," Stanley told Salon. "So Joseph Spurgeon must be a guy he sends out to talk to reporters." Spurgeon and Thomas have also said they tried to call and text Johnson to prevent him from committing suicide, to no avail.

(Full disclosure: My partner was an executive producer on Stanley's documentary.)

Operation Save America was the group that spent decades harassing Dr. George Tiller, an abortion provider in Wichita, Kansas, until a regular clinic protester murdered him in 2009. When another clinic opened in the place of Tiller's, Thomas declared, "OSA has some unfinished kingdom business in Wichita, Kansas. Tiller's mill was reopened."

But the main focus of Operation Save America has been the last remaining abortion clinic in Kentucky, which has been subject to the illegal clinic blockades that the group used in the '90s but abandoned for many years — until now. The group has been open about its desire to make Kentucky the home of the radical anti-abortion movement, especially now that it believes Donald Trump's presidency has eased the path for more militant tactics.

The relationship between Johnson and Kentucky Gov. Matt Bevin also shines some light onto the political dynamics that are allowing Republicans to chip away at abortion access in red states. As Crim argued, people like Johnson "would have been fringe characters two years ago, five years ago, but now they’re getting elected to office."

Once in, legislators like Johnson embrace extreme and blatantly illegal positions, such as an effort to reclassify abortion as murder. This makes politicians like Bevin, whose strategy is to use ginned-up regulations to bury abortion clinics under red tape, look moderate by comparison. But in reality, as Crim put it, "The fringe has become the mainstream."

There's only one abortion clinic left in Kentucky, because Planned Parenthood was unable to get hospital transfer agreements required by a recently-passed (and medically unnecessary) law blatantly intended to shut down as many clinics as possible. Planned Parenthood says it has evidence showing that Bevin used defunding threats to prevent hospitals from helping Planned Parenthood follow the law.

There is also reason to believe that Bevin's true sympathies lie with extremists like Dan Johnson and Operation Save America. In February, Bevin held a meeting with the leaders of Operation Save America, who say they gave him the book "Doctrine of the Lesser Magistrates" by Matt Trewhella, a pastor who has argued that murdering abortion doctors is justified. The group's leaders further claimed Bevin had praised the book, even as he demurred on the question of signing legislation to classify abortion as murder.

(Bevin's office and Operation Save America both failed to return Salon's requests for comment.)

Stanley and Crim both told Salon that this entire situation highlights how easy it is for radicalized right-wingers to get power in state legislatures and start pushing a state's politics to the right.

“Most people just have no idea who their state representatives are. People don’t go up to vote for that," Stanley said. That makes the state legislature fertile ground for extremists to build a power base. "When you think about the things that really affect people’s personal lives," she continued, "it’s the laws that are passed by these state legislators."

Johnson's death has certainly rattled the far-right fundamentalists who supported him, but it doesn't seem to be slowing down their efforts to push their absolutist agenda through the Kentucky legislature. Even before Johnson's death, his supporters were writing off the sexual abuse allegations as a politicized lie created by the "establishment" and largely ignoring the multitude of alarming claims about Johnson's long history of fabrications. The day after Johnson's death, his widow, Rebecca Johnson, announced plans to run for his legislative seat. "These high-tech lynchings based on lies and half-truths can't be allowed to win the day," she declared.

“People like to say it’s the last, dying gasp of previous generations," Crim said of the rise of the far right in state legislatures. "And maybe it is the last gasp -- but it’s a big gasp. It’s a very powerful breath they’re taking.”