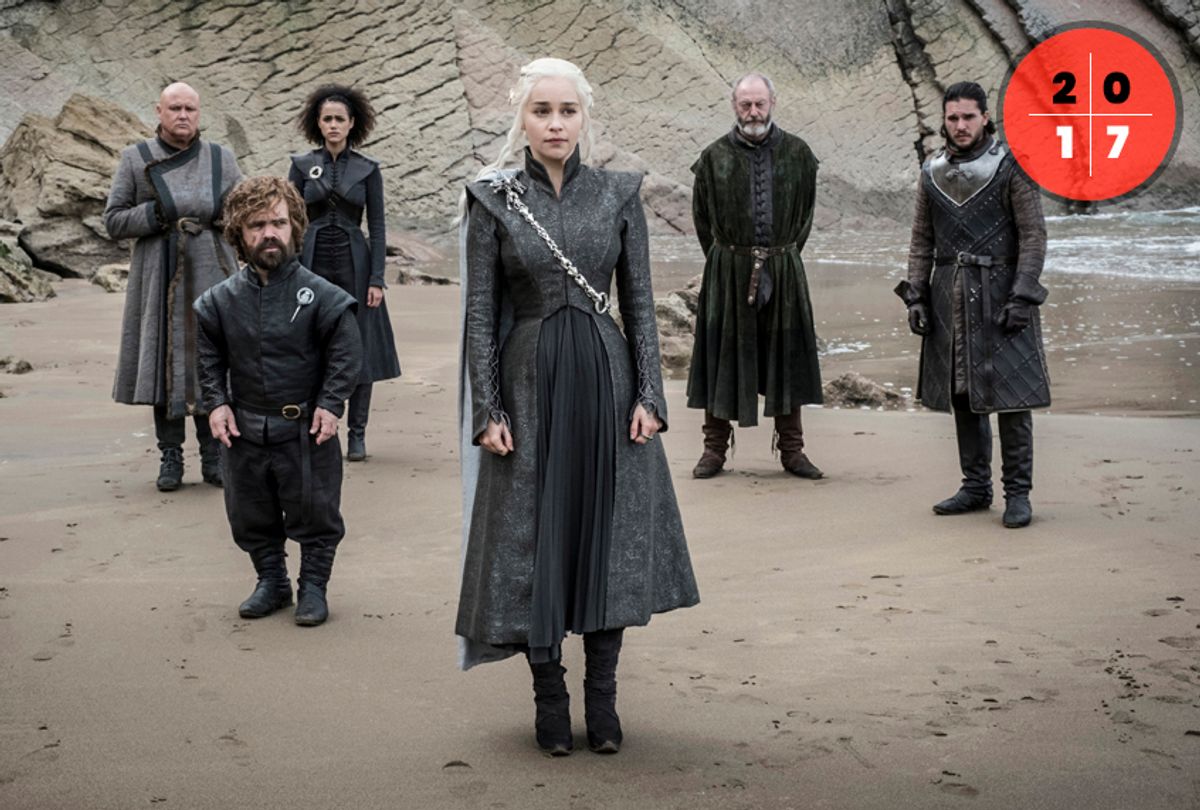 Culling a list of superior TV series is a ponderous task in any year, increasingly so in more recent ones. Coming up with a list of best TV episodes is an altogether different challenge. Hundreds of TV series premiered in 2017, which puts the new episode count in the thousands.

Luckily, the year’s superior installments stand out in the memory. The tough part is choosing even 20, let alone 10. I couldn’t do it, which is why this list includes one additional choice. There could have been many more; for example, the “Juneteenth” episode of ABC’s “black-ish” bounced on and off of this list, as did individual episodes of FX’s “Legion,” Netflix’s “The Crown,” “GLOW” and “She’s Gotta Have It." Additional episodes of “BoJack Horseman” and “The Leftovers” that are equal to the ones called out here could be here, too. And I’m sure there are outstanding episodes of “Twin Peaks: The Return” and “Halt and Catch Fire” that could have made this list if I had watched those shows.

But this is a list of 10 — no, 11 — episodes of TV that stand out from the mass, whether for their narrative execution, the performance of their casts, extraordinary cinematic artistry or all of the above. Feel free to debate, add your own bests or argue with the selections. After all, isn’t that what these lists are for?

11. “Game of Thrones,” “The Spoils of War.” The seventh season of the fantasy blockbuster may be its weakest overall, but this episode went to great lengths to remind us of why we keep watching despite its flaws. First, it manifested a pulse-quickening “what if” duel between two of the series’ best warriors, Arya and Brienne of Tarth.

In the main event, Daenerys Targaryen unleashed her might on the Lannister forces following their raid on Highgarden, backing up her Dothraki horde with the incendiary wrath of her dragon. The resulting confrontation was visually thrilling and horrifying in one swoop, as we finally faced the possibility that the various characters we’ve grown to like may actually kill one another. Underscoring its excellence, the behind-the-scenes examination of the effect and stunt planning that went into making “Spoils” is almost as enthralling as the episode itself.

10. “Insecure,” “Hella Perspective.” The second season of Issa Rae’s half-hour show sparkles in every respect, but its finale, which plays with three perspectives on the show’s central (and currently broken) romantic relationship, hit a new height for the series. In it, we see a period of time from the perspective of Issa, her ex-boyfriend Lawrence and Issa’s best friend Molly, who is currently evaluating her career and romantic paths. A harmony of warm and realistic affection, regret and the discombobulating effects of change, “Hella Perspective” refuses to end neatly — just like real life.

9. “Dear White People,” “Chapter V.” In expanding his film into a full season of television, series creator Justin Simien grants a complexity and intimacy to his examination of identity politics and ignorance on a college campus. But in this episode, when a campus party devolves into a violent confrontation with punches thrown and a police call, the consequences of assumption and inequity appear on the horrified expression on the face of Reggie (Marque Richardson), whose suddenly finds himself starring down the barrel of a security officer’s firearm. Director Barry Jenkins (“Moonlight”) carefully draws out that moment to slug home the impact of its terror, an overuse of force that reduces the college student to shuddering hysterics in its aftermath.

8. “BoJack Horseman,” “Ruthie.” Surgical examinations of the main character’s foibles dig more deeply into his pain with each season, yielding incredible artistic departures and consistently allowing “BoJack” to top itself. The latest season eschewed aesthetic adventure in large part, choosing instead to play with the idea of perception and the stories we tell ourselves about ourselves and our families. This concept took BoJack to interesting and redemptive places. This episode, meanwhile, follows his manager and ex-girlfriend Princess Carolyn through a truly terrible day that dashes her dreams over and over again, poking holes in the image she presents to the world as an innovative and indefatigable success. Charmingly, it’s presented through the eyes of an admiring descendant of hers, telling her story in a distant future. It’s only in the end that we discover how insistent Carolyn’s self-deception is, as well as how effective it is as a coping mechanism.

7. “Feud,” “And the Winner Is . . . ” The enmity between Joan Crawford and Bette Davis spiked in the 1963 Oscar race, in which Davis received a nomination for “Whatever Happened to Baby Jane?” while Crawford did not, leading an envious Crawford to sabotage her co-star’s chances. Jessica Lange’s vamps up Crawford with delectable relish in this episode, particularly in her elaborate wardrobe preparations for the event, in which she finagled herself a role as a presenter. A tracking shot following her before the moment of truth is simply stunning, as is a final shot that reveals how fleeting glamour can be, and how small and lonely she truly is.

6. “The Good Place,” “Michael’s Gambit.” Comedies fueled by game-changing twists are a rarely seen species. The one that culminated in "Michael's Gambit" explained a number of the nagging questions of the story while turning the entire premise of the series on its head. And if a person couldn’t fully appreciate the series before, watching Ted Danson transform from kind-hearted caretaker into pure evil in the span of a smile may be all it took to win over any doubters.

5. “The Handmaid’s Tale,” “Late.” Here’s a series in which any episode could qualify as one of its best. But this one is especially chilling, bouncing between the near past when the civilization we take for granted suddenly plunges into patriarchal totalitarianism, in which the woman we know as Offred finds out her rights have vanished by way of attempting to buy a cup of coffee. In her present, she’s celebrated when she believes she may be pregnant, then abused when it turns out she is not — by another woman, her mistress Serena Joy.

4. “Better Call Saul,” “Chicanery.” Charity may begin at home, but for the McGill brothers, that’s also where resentment is sown and grievances cultivated. And while this has brewed throughout the series, the confrontation between Chuck and Jimmy at a hearing before the bar association represents Jimmy responding to Chuck’s low blow with another more cunning and painful. As Jimmy’s associate and ally explains to the board, this is not merely a story about legal wrongdoing, “but about two brothers whose relationship, after years of strain, finally broke.” This is where we watch the snap.

3. “Better Things,” “Eulogy.” We don’t appreciate our loved ones enough. That’s the clear message of this episode where Sam Fox finally has it with her kids and their disregard for her efforts, and demands that they tell her what they’d say to her after she’s gone. The resulting act is hauntingly and achingly loving, just another example of this show’s ability to be moving and real.

2. “Master of None,” “Thanksgiving.” Bighearted. That’s the best way to describe this quiet, lovely episode for which Lena Waithe and Aziz Ansari won a writing Emmy. Thanksgiving can be the most emotionally rocky of holidays, after all. And this installment serves as a coming-out story for Waithe’s character, as well as an origin story of sorts for the lasting friendship between Waithe’s Denise and Ansari’s Dev, told over the course of a series of holiday dinners. Over the years Denise’s mother traverses denial, mild anger and finally, encouraged by her grandmother and aunt, acceptance of her daughter and who her daughter chooses to love.

1. “The Leftovers,” “The Most Powerful Man in the World (And His Identical Twin Brother).” Grief robs us of logic and leaves us to chase impossibilities. When all else is lost, Kevin Garvey chooses to die in order to set things right, because for him death is a portal into another existence where he is a hitman. And the president. And where everyone and everything he knows is something else altogether. “The Most Powerful Man in the World” is a different take on the series’ view of consciousness and reality, and it essentially offers Kevin and the other lost souls an out. Absurdly comedic, inspiring and shocking throughout, it ends on a note of reconciliation and acceptance. All the while it ensure that the viewer will keep believing in the dream that it built through the episode, one that flits through the entirety of a series that left us right on time and yet, too soon.